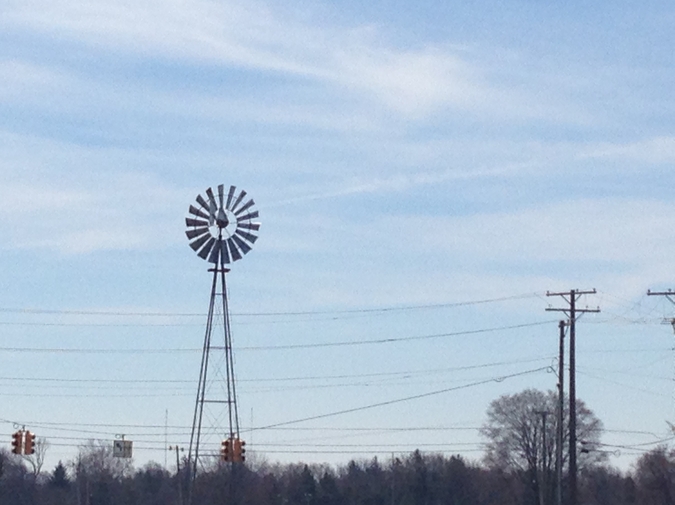 Imagine we meet up on the corner of some tumbleweed-tossing town.  A black arrow next to the stop sign (there is no traffic light, and the wind sings its whine) nods toward the interstate as if there’s only one way to disappear.  A heavy, white sun hangs above us, so we squint against the dust and every direction we’ve never allowed ourselves to choose. We’re leaning—against a rust-tired truck outside a no-name restaurant that’s been dimmed by dark windows and a CLOSED sign.  We drop the edge of the bed down, and when you let the lip fall, I feel whatever ache that’s got a hold of me in its creak. We spread a wrinkled map across rusted grooves. Smooth thin edges. Force snaps from creases. We roam our hands across a stubborn page, spreading out all the states you remember, the ones I’ve never seen, the one you won’t mention, and the one where I might end up next year. We’ll marvel at ragged lines and coastal ledges, the middle of the country’s closing-ins, or offs.  You’ll press your hand over Georgia. I’ll press mine over New Mexico so we can lock out where we are, where we’re from—for now. Pick some place so we can follow the sun-glare on the windshield. Meantime, tell me the stops that will surprise us. A river, tell me there’ll be a river.

So many ways people become ghosts, I might say, and we might look out over this roadmap to anything, and you might say, you only go so far before turning around. You haven't run out of definitions of running, yet, and I'm always willing to ride out the end of the world. I say there's nothing more closed-in than the open of the desert, so we decide the only way to get anywhere is to go. We cross borders and decide nowhere worth stopping is marked on any map. We'll find ourselves on roads to places great for hunting wild mushrooms if you don't mind getting lost and following the come hither of traffic back to the road or toward meadows in national parks where you can drink your wine and I’ll drink my whisky while we watch as climbers make dangerous ascents in the dark. I might ask you what it is you need right now and I'll know some version of the answer already. We'll want some sign of water, a sign of the earth opening up its offer of new, and we'll follow it all the way. You'll head on back to New Mexico (no maps to show the thing you might be looking for). Back in Georgia, she'll be waiting, and I'll cross the border, a sign reading We're glad Georgia's on your mind, and I'll hit play on the radio and let the howl guide me to the source.

Jill Talbot is the author of Loaded: Women and Addiction, co-editor of The Art of Friction: Where (Non)Fictions Come Together, and the editor of Metawritings: Toward a Theory of Nonfiction. Her memoir, The Way We Weren't, will be published by Soft Skull Press in July.

Justin Lawrence Daugherty lives in Atlanta, where he runs Sundog Lit and co-founded Jellyfish Highway Press. He also edits Cartridge Lit and New South Journal. His essays have appeared at The Normal School, Barrelhouse, and other work appears in Whiskey Island, Gigantic Sequins, and elsewhere. They have published two other collaborations, one in Pithead Chapel and another in The Rumpus.