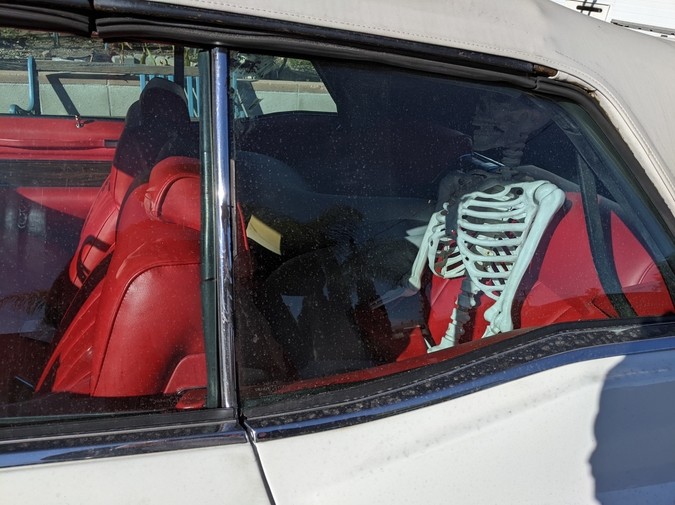 They say, happy women are all alike, but every unhappy woman is unhappy in her own way. But I dunno. Take my friend, Kate: she is committed to allowing herself only an exact number of each piece of clothing. For example, she has three blouses, five T-shirts, two pairs of shorts, a single pair of great jeans, etc., and if she wants to get a new item, she has to make the decision to get rid of an old one. Kate’s had only one husband but has two daughters from different men, and once slept with my husband before he was my husband, which isn’t necessarily interesting to you but is one of my favorite things about her. Anyway, Kate’s pretty happy. And she’s nothing like Zoë.

There’s also my friend, Laura, or not really my friend but my colleague, and since that’s her real name I’ll call her Sara, but Sara has always struck me as very happy. One of those has-it-all, curvy- but-not-too-curvy, smart but not obnoxious about it, great kids but tempered with some sort of manageable learning disorders kinda gals, the kind you can imagine maybe kissing at the holiday party, but only at the holiday party, because she’s much too upstanding to have an afternoon make-out sesh with you at the copier.

Not that I’m looking to make-out with anyone at the copier!

Hahaha. “Not that I’m looking to make-out with anyone at the copier,” she said.

I bring up Sara because I’d had these ideas about the kind of life she must live (baked goods, sidewalk chalk), but then, last week on Facebook she posted that awful story, too awful to even put into print here, if this was print, but trust me, I just spent forty minutes clicking and reading about it in the Post, the Times, etc, one of those horrific jilted electrician lover kind of things that makes you want to throw up, and then leads to other stories, different stories, about thirteen year-olds being sex trafficked in Staten Island (their mothers at home, recently diagnosed with breast cancer (ahem)), searching their TikTok messages for CLUES), but Sara KNEW this woman, and in her post asks us to remember the woman who the awful things happened to not as the woman who the awful things happened to, but as a mother, friend, etc.

Anyway, that got me thinking about my friend Jessie, from grad school. Jessie was what I called “older” then, probably twenty-eight, haha, but she had gravity, never knew her dad, had been abandoned by her mother; we’d wander lower Manhattan, and she’d pine for a $20 burger. “One day,” she said, “I’m going to feast on a $20 burger.” This was the nineties so that was a VERY EXPENSIVE burger. Anyway, Jessie told me—I think around the time I was sleeping with the bartender who’d lie on the couch with me all day eating Taco Bell (hello, my little gordita) and watching Law & Order (god, I loved him)—Jessie said, and I quote, “Nicole, emotionally healthy people hang out with emotionally healthy people.”

Being that Jessie was not a exactly a fountain of emotional health (nor a big fan of Law & Order; not that it matters, or that it only matters in the way everything matters) this may have been the beginning of the end of our friendship, but then, a few days later, I met her on the lower eastside because we were going to walk to Brooklyn to see the cherry blossoms. It was a little chilly so I had on that green army jacket I wore for two decades, and she said, “You look like Brad Pitt today.” Holy shit. Can you imagine. I mean, sure I wanted to be more of a Gwyneth, but I would take Brad. She even snapped a picture of me and got it developed at the drug store.

I thumbtacked it above my desk, and for years, when people first came to visit and commented on the photo, I’d say, “Do you think I look like Brad Pitt there?” Mostly they’d say, “Huh? A little!” (that’s what Zoë said; she’d probably still say it if I asked with enough desperation), but then, when I started dating the man who would become my husband (the one who’d slept with Kate), he said, “No.”

Fair to say now, reader, a quarter of a century later, I hold no pretenses about looking like Brad Pitt. I did purchase, last month, after receiving Gwyneth’s “Morning Routine” email, a whole line of Goop shit, which I can now say—because we can only say things in hindsight, right?—dried the shit out of my skin, so bad, frankly, that I’m happy, today, to be a close contact to a Covid case so I don’t have to leave the house and can just sit here asphyxiating in Aquaphor, occasionally parading around in my blue robe, DRIVEN TO MAKE ART(!!!), because there’s nothing on Hulu, and even if there was (but there’s not because I went and checked in the middle of this sentence), but even if there WAS, I’d still be DRIVEN TO MAKE ART, because life, friends, is boring.

I know, I know. We must not say so. I’m speaking mostly of middle age woman nearing the end of the pandemic (I hope!) forced into medical menopause, one kid with an eating disorder, another with a proclivity for gaming, a dog who seems to have far worse manners than anybody else’s sweet pup, and hungry(!!!) because, after my cancer diagnosis, my friend Anna (the poet who joined the CIA) sent me a youtube video titled “Inflammation & Intermittent Fasting,” then I started noticing that all my skinny friends (Dawn, Caitlin) NEVER eat before noon so I was like it’s worth a shot (incidentally, _this_ is one of the ways people *make you feel* like your cancer is your fault; like, if only you hadn’t consumed all those night shades and/ or numerous bean burritos maybe you wouldn’t be shuffling around contemplating mortality or making follow-ups with your radiologist or getting nipple-looking tattoos where your nipples used to be), but who’s to say life wasn’t a little boring last century when Jessie and I were hoofing it through the city in our Doc Marten’s?

By which I mean: life’s boring; YOU’RE GONNA DIE; pass the salt; make some art.

But what is a story?

We looked at a prose poem in which a woman who’s eight months pregnant is crying in a cab to her husband on their way to Home Depot, and then she asks the driver to let them out. I don’t remember if the husband was crying. Kathleen says, “I don’t see the plot here.” I’m like, “She was crying; she asked the driver to let them out; the driver drove away.” I mean, it’s only twenty or so lines long, what do you want the woman to do? Throw herself in front of a train?!

This was on the afternoon that my youngest daughter, Ella, brought home drawings of fetuses which were only chick fetuses, but I was alarmed at first because of Oklahoma and R v W, so I said, “Tell me about this.” She said, “It’s a baby chicken. See, there’s its egg tooth.” Apparently chicken feti develop little egg teeth so they can crack their way out of the shell!!! This astounds me, reminds me of those girls who, in mall parking lots, get thrown into a trunk, and then pop out the brake light and wave a bloody tampon until someone notices and SAVES them.

I only know this—that the plot and the egg teeth thing happened on the same day—because I tried to write a poem about it which also touched on that afternoon’s Maryland tornadoes and my late-term miscarriage turned terrible afternoon at a midtown abortion clinic; also a cavity I was tonguing while packing boxes; also the boxes themselves. Which is to say: it was a failure of a poem. Poems cannot contain everything; in fact, much of what is contained in a poem is what is left out. Stories, though, stories.

Take my Instagram story this morning: my neighbor’s peony! My god, that man has the prettiest pale pink peony situated in front of his comely brownstone that I HAVE EVER LAID EYES ON. Lain?

Actually, don’t take my IG story, because I’m not so good at IG stories though I’m trying to get better but really I only post them to see (privately & exactly) who has (privately & exactly) viewed them (did *you* see it?!? No, no, *you* didn’t, and I know *you* didn’t because my little handheld computer told me so). So, take Erika Meitner’s IG story, because she is a PRO! Her Wikipedia page says she’s an American Poet born the year after me, and then has links to Life, Work, Awards; all of which are notable, but what I want to make note of here, as you flip through your New Yorker hahaha, is her skill at IG stories. Just this morning: a copy of her book reposted from a kind of hot poet cut to a cocktail and “light reading” with Schneiderman (my god, the light!) cut to more books, a new poem in Ploughshares; a construction site w/ KAFKA spraypainted on it; marching band; dreamy night shot of Empire State Building with sexy quote about the city’s rhythm clearly taken from a hotel room in which someone else WASHED the sheets not to mention all the details inappropriate for this high-class print journal. I mean, MY GOD WOMAN.

Do you know what I mean?

In conclusion, it’s 3:09 pm on a perfectly nice day in May in the year two thousand and twenty-two. I have yet to shower. I did manage a clementine and a baggy of almonds which I forgot to slip in anyone’s bag, just in case.

Zoë texts. (It’s an old photo of the chickens: they’re standing at the edge of the grave she dug for the cat which is in the box.)  “How’s your story?” she asks. “Did you get a zombie in there?”

And I’ll let you in on a little secret, because it’s now 3:18 and being that I recently quit my BIG job I’m trying to dedicate some afternoon time to napping and/ or meditation, but, yes Zoë, I did; I did get a zombie in there. I’m not going to get heavy-handed and call it AMERICA or CAPITALISM or the effing PATRIARCHY, but I will say, with a great deal of certainty, that I can feel it behind me; I can feel its fingers on my neck; I can feel its hot breath traveling down the back of my dirty robe. It wants to eat my brains; it’s ravenous, and, if I let it, it will destroy me.

Nicole Callihan writes poems and stories. Her flash fiction and prose poems have appeared in The American Poetry Review, The Mississippi Review, LIT, Failbetter, and Painted Bride Quarterly. She has several volumes of poetry, as well as a novella, The Couples, which was published by Mason Jar Press in 2019. Learn more at www.nicolecallihan.com.