My Other Harry Styles Poem 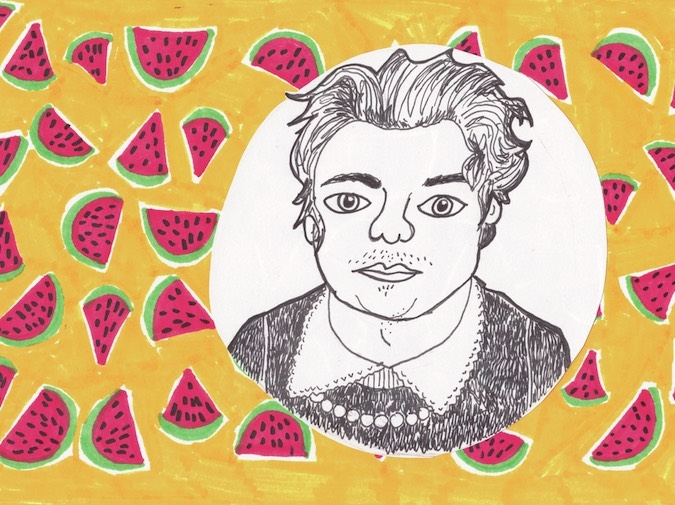 My Harry Styles poem has gotten very good at glass of Lambrusco
on the arm of the sofa not crashing & purpling the floor,
used to play the saxophone
and doesn’t love sexophone jokes
but also has made one or two when the light was mauve
and thought it might come off
even if it wouldn’t feel that great.
My Harry Styles poem definitely didn’t get ‘tude
from Julia for trying to listen to the new Fiona Apple
when it hadn’t really listened to her before and it certainly
wasn’t told to start with Tidal, buddy.
After acknowledging its failures
my Harry Styles poem knows love is strong enough
that it can soon thereafter steal Julia out of the grocery bag
and dance with her and she’ll drop the bag of flax
but she’s able to keep in step with the red onion still in her hand—
it’s our only one and we need it for the recipe and she can magic this
the dancing and the onion holding,
way better than my onionless dancing.
Whoops my Harry Styles poem is listening to Bruce Springsteen
and feeling masc power it never feels
around men though sometimes in the backseat
of Matt B’s car on the way to school
when he played Bruce super loud
and I [whoops] didn’t have to feel threatened by boy.
Does Harry think love is a threat?
Not any more, but he knows about that.
My Harry Styles poem believes it’s believable that boys have true
and good friendships with boys
intimate and cute and love—
sometimes one flicks the everything
of the other’s everything bagel
and says “you’ve got something on your bagel”
and they lock arms and take shots of tequila
and the next morning pack quartered orange
for each other for after pickup soccer.
Orange slices on a Sunday morning
and sore quads and sentimentality for friends
who are far away
and a little blush for such delayed emails
and a feeling that I can’t help
but want more than just your emails
that I can’t bear give the attention to the distance
but really maybe it’s just a little laziness
or probably a little self-absorption
slash getting overwhelmed with big feelings of gender radicalness
over small gender radicalness
like how radical really
what to do with these nails
what flower for this new piercing
what to cry about in this new blue air
what to make of this shallot
how to hold this new Harry Styles love song.
I hold it like a kitten, carefully
and with a little careful abandon and let us say that some
of the small decisions
and the feelings that attend the heart
while the hand is painted are radical.

Andy Powell is a Teaching Artist for DreamYard in The Bronx. He has writing out with The Paris Review, Winter Tangerine Review, Glass: a Journal of Poetry, and elsewhere. He co-founded DreamYard's Rad(ical) Poetry Consortium with Ellen Hagan.

Megan Kirby is a writer, illustrator, and pop music aficionado who lives in Chicago.