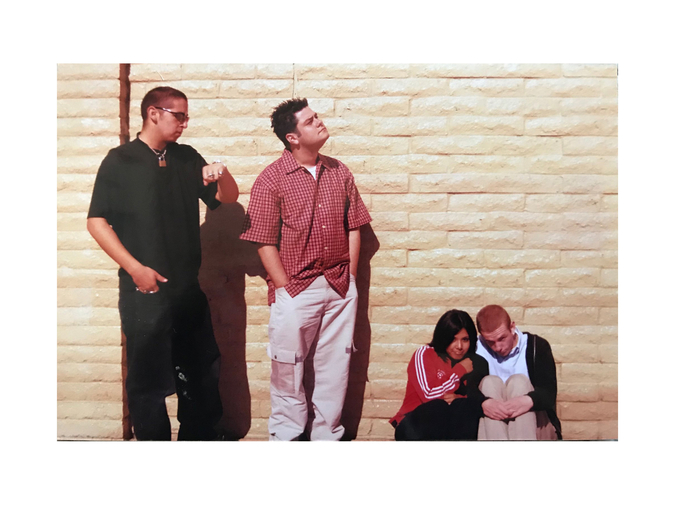 Parker is the coolest kid in fourth grade. Everyone thinks so. If Parker says something is cool, it’s cool. Period. I don’t know any better, yet. Parker says this band that sings a song about Buddy Holly is cool. I ask around but none of the other fourth graders know what I’m talking about. I go to Parker’s house after school one day, find out – Weezer. Just remember, the CD is blue.

Mom takes me to Wal-Mart. I find the CD between something called Ween (what?) and Whitney Houston (Mom likes her). I find Mom, beg her for the CD. It’s coming out of my allowance, she says.

The band looks so cool. I don’t know why. I wonder if they know why?

Dad hears the chorus of “In The Garage” and laughs, mocks. He makes up his own lyrics and sings over the stereo in my room, says this isn’t real music.

Parker isn’t listening to Weezer anymore. He asks have I ever heard of Tool?

Mom and Dad divorce four years later. That summer, we leave Louisiana for California with Mom. We don’t tell Dad.

The other freshmen in my class don’t like how I look. My front tooth is chipped like Jim Carrey in Dumb and Dumber and I have a southern accent. I’m wearing Dockers, a white oxford, and G.H. Bass boaters. They make fun of it all.

Richie, a senior in my guitar class, performs “Say It Ain’t So” during lunch in the MPR. Half the school is there. His band, Get Well Soon, plays with him. Another guy in my class asks if I want to perform a Creed song with him.

Dad shows up the week before Christmas, a week before my birthday. Only five months after I’ve been in California. Only a month after I’ve made a friend. Only just after I find out what punk is. He has a court order that says I’m moving to Mississippi with him. We fly out the next morning.

Christians can’t be punks, and punks can’t be Christians. I learn this the hard way. The youth group Dad makes me go to doesn’t let me wear my Dead Kennedys shirt. The punks I hang out with at school think MXPX blows.

The judge asks which parent I want to live with. I start my junior year back in California, at a new school, the fourth and final one I go to.

Jonathan is a year old than me, we meet in Journalism class. Our teacher, Mr. Douglass, doesn’t give a shit what we do. It’s a big classroom. Jonathan takes Mr. Douglass’ guitar, starts playing “Undone – The Sweater Song.” Me next, I play “No One Else.” We talk about the album. Jonathan calls it geek rock. I like that. That night, I find the CD with multiple lacerations across its jewel case and my last name written in permanent marker on the back, pop it in the stereo and listen to the whole thing.

I’m the guy at school everyone knows for wearing sweater vests, cardigans, and thick-rimmed glasses. No one minds my khakis and oxford shirts. Jonathan and I start a band: Down With Josh. We write our own songs and play a lot of Nerf Herder, Ozma, Cio Cio San. I obsess over the Pinkerton album, learn to play every song. But when given a choice, I still pick something from the Blue Album.

D.T. Robbins is a writer living in Rancho Cucamonga, California. His stories are published in Headway Quarterly, Chiron Review, Dead Mule School of Southern Literature, and more. He holds an MFA from National University. Sometimes he tweets (@dt_robbins) and it could be worse.