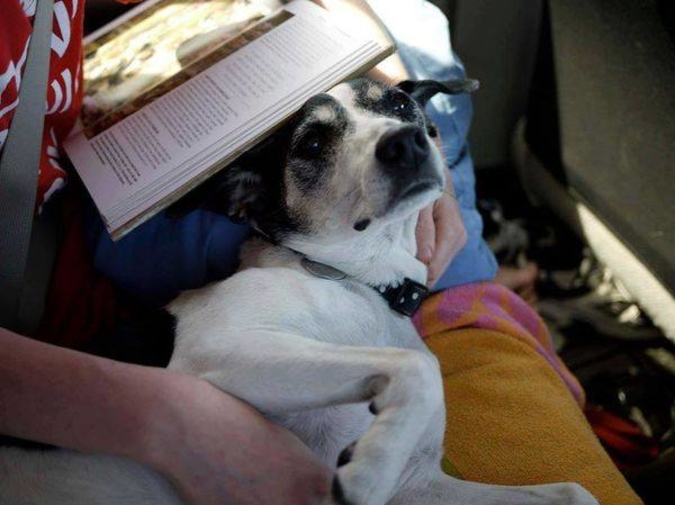 I am either a dog telling you this story, a dog writing this story or a woman pretending to be a dog doing one of those two things. It would be simpler—suspension of disbelief etc—if you just accepted I am a dog. For the purposes of this story, The Dog.

A rat terrier. My family are the Fullers, but my name tag, ordered online, says I belong to the Dullers. Jokes were made by the family about that over the years but the tag stayed my tag. My name is spelled correctly, Maya. But I am referred to as The Dog and, honestly, I prefer that. There are other Mayas. The Mother has a friend with that name. The Dog is singular. Unique. There was not and cannot be another.

Now that you have accepted I am a dog, I should also tell you I am dead.

I am buried in the backyard, beside the garage, under the rack where the family canoe rests when not in the water. I lived in the house, alive, for sixteen years. I have been out here, dead, for four.

In my last years in the house, I didn’t move much, so the transition to not moving was not such a shock.

From here, I can see the lights in my boy’s window.

My boy. The Mother of the family is the mother of us all. But the boy, no other way to put it, was My Boy. I gave birth to him. I can’t quite remember it—but the feeling is there, so strong there is no doubting it. My Boy.

I always know where he is. I knew when he left school to walk home, would be waiting for him. My job in life was waiting for My Boy.

The Mother, who also thought she was his mother, understood. She said to me, as I got older, slower, “You’ve  got to hang in there until he goes off to college.”

But The Boy is back home now. There is something going on. All the family is home. They rarely leave. The car hardly moves. This last summer the camper, that little house on wheels, which is parked in the half of the garage nearest me, did not move either.

I like being close to the camper. When we went camping, we slept inside so close I could hear everyone breathing, smell the scent coming off their skin. There is—I have to tell you—nothing better for a dog.

I also like being sheltered under the canoe. I never liked swimming, but I liked riding in the canoe for the same reason I liked sleeping in the camper. Everyone in one little space. The water sliding by safely outside.

Just as the night and the animals were outside the camper.

Now the night and the animals are my companions. But that’s okay. Nothing to be scared of anymore.

But I am worried about the family.

Why does no one go to work?

Why doesn’t The Boy go to school?

Is he too old for that now?

I can see him at night at his computer. He stays up very late. I can tell he is restless. The room too small. The world outside somehow forbidden to him now.

He moves only slightly more than I do.

Since he is alive and I am dead—that can’t be a good thing.

So I am waiting. Watching. Hoping this will pass.

It is winter now. The squirrels huddled in the leaf nests high in the trees or inside the house where they have chewed their way into the attic though The Father doesn’t know that yet.

Do humans hibernate? I don’t think so. School went on through the winter. I remember pulling The Boy on a sled on the frozen lake when he was little and I was young too.

But The Boy’s light is on so I can’t.

I see The Mother is worried too. She knocks on The Boy’s door. The Father is working on the back stairs to the attic. Any minute now, he is going to discover those squirrels. When I was alive, I wanted to eat a squirrel more than anything. They move like rats, that same jerky movement that is in my brain, in my DNA, as an itch to kill. Rabbits, cats didn’t matter. But oh those squirrels. They would cling to the sides of their trees and chatter, mocking me.

Now I just hope they make it through the winter, that The Father does not chase them out into the snow. I don’t feel the cold anymore but I know they would. I know how warm and sweet the air inside the house is.

The Boy’s light is off now, but he is not asleep. I can see him sitting in the glow from his computer. Is that his life now?

I feel The Mother awake on the floor above him. We live, we mothers, to raise our young. Together we raised this boy,  sent him out into the world. What was the point of our lives if he does not leave us? He was born to leave us.

What is the point if the boy does not go out into the world?

What is the point if there is no world left?

Jesse Lee Kercheval is a poet, writer, and translator. Her recent books include the poetry collection America that Island off the coast of France, winner of the Dorset Prize, and the story collection Underground Women.