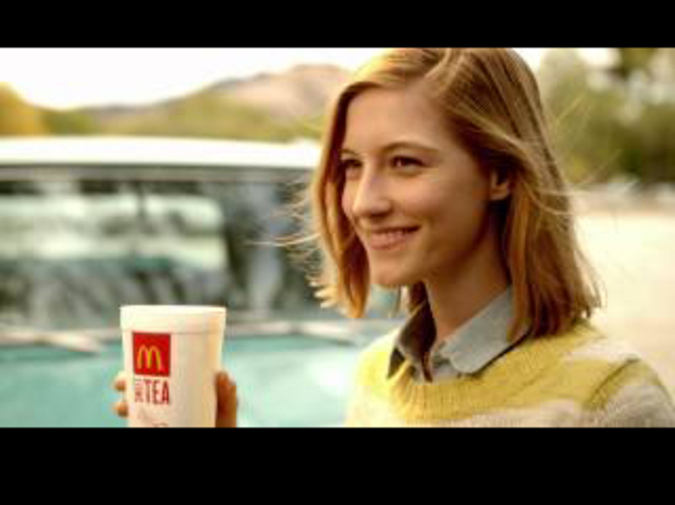 We pull into the campground and it’s just like I imagined it would be: chaparral scrub receding to oaks and firs as we move up into the mountains on a gently winding road. You’d never know we’re only an hour outside Los Angeles, the traffic and the smoke and the crowds. I look around the car at Josh and Tommy and Laurel, all of them beautiful and cool and careless in that way that only beautiful people who know they’re cool can be, like they chose the clothes they’re wearing by accident, forgot to brush their hair, rolled out of bed and into the car and still wound up looking like they just walked out of an Abercrombie and Fitch catalog.

If being Laurel’s little sister has taught me anything, it’s that I don’t look like this, that I’m not and will never be one of these people.

I watch Josh and Tommy watching her. They’ve probably forgotten that I’m even sitting here, next to Josh, behind Tommy, diagonal to Laurel and her jean shorts and a top that I’ve never even seen before and her blond hair cascading in the wind. She twists in the seat to adjust her shorts and Tommy nearly drives off the road into a sign that says “Welcome to Angeles National Forest.”

“Are those guys meeting us?” Josh asks.

“They were getting the party supplies,” Laurel says. She says the last few words like they’re the password to some magical kingdom and I picture some kind of velvet curtain rolling back to reveal everything I’ve been missing so far in my first sixteen years. This is what Laurel’s been doing while I’ve been studying. I’m a muggle and she’s Harry Potter, queen of this world that I couldn’t even see until today. Of course, I knew it all along, or I suspected. There’s always been something about Laurel that’s been untouchable, unseeable, a part of her that she keeps just for herself. This, here, in the car with her and Tommy and Josh on our way to something they haven’t even seen fit to tell me about yet, is as close as I’ve ever been.

“In the trunk,” Tommy says. Then he adds, “Southwest Regional Semi-professional Hamburger and Sodapop League Champion.” He says it like it’s a joke and it’s not a joke, like he’s hedging his bets on which it is to Laurel.

“Damn straight,” she says. “Burger and Soda League horseshoe champeen. That’s me.”  Tommy and Josh laugh. Tommy pushes at her shoulder. “Undefeated,” Laurel says, and I wonder what the hell they’re talking about, why they think it’s so funny. Could they really be talking about horseshoes? Hamburgers? As usual, Laurel says everything like there’s some part of it that we’ll never understand, some part she’s saving for somebody who isn’t here yet.

“You ready, little sister?” Tommy says. In the rearview, his teeth are straight and white. His hair looks like it was tousled by the most highly paid Hollywood stylists. He looks like a guy in a band on a made for television movie.

He nods. His eyes move back toward the road. “Right,” he says. “Brenda.”

“Whooooose mix is this?” Laurel asks. There’s a crackle to her voice, a flirt that I’m not used to hearing.

“This song is soooo good, you guys!” Laurel says. She turns in her seat, holds her fist out and Tommy does the same. They bump. “Dave Matthews Band are the bomb, y’all,” she says.

She shakes her head and sighs.

“DMB!” Tommy shouts out the window.

The three of them sing along: “aaah-ALL the lee-tle ants are marching…”

We pull around a corner and Josh heads over to an opening in the trees, where a bunch of vintage Gulfstream campers all parked all in a row. A group of people are hanging out, talking, setting up gear. Clearly, a party is starting. We get closer and people wave, shout greetings.

I’m speechless. They are beautiful, all of them, in the same carelessly rumpled way of Josh, Tommy, and Laurel. I feel like we’re driving up to a catalog photo shoot, except there aren’t any photographers or directors standing around, just a multicultural dream of happy, shaggy, improbably pretty twentysomethings.

Tommy parks. “This is it,” he says. Josh hops out and makes his way over toward a group of people setting up tables under a stand of trees.

Laurel turns to me. “Don’t embarrass me,” she says. Her hair has somehow twisted and blown itself into a perfect corona around her perfect face. Then she smiles. “I know you won’t,” she says. “Just. Have fun.”

A tall African-american guy with geek glasses and a cowboy shirt strolls toward the car. He and Tommy do that handshake hug thing and then he gives Laurel a real hug. “And you are the little sister,” he says.

“Brenda,” he says. “Right. I’m Lee.”  I hold my hand out for a shake and he laughs, pulls me in for a hug. He smells like body spray and Mountain Dew and something else. Food? Onions?

In the distance, I hear music start up. Drums. Some kind of organ.

“Where are those guys?” Laurel says. “Did they go all the way to Sunland? That’s like the closest one, right?”

Lee checks his phone. “Any minute now,” he says.

People are still bunched into little groups, milling around. I’m nervous and I pick at my cuticles, stare at my feet. I look for a keg. Or a bar. I have never been this kind of party before, but I’ve seen enough movies, watched enough television to know that somewhere, behind a car or a stand of trees, there’s a keg sweating into a tub of ice. I scan the crowd. No red cups. No joints or cigarettes or anything. I remember what Laurel said before: “party supplies.” I wonder if I’m ready for whatever this means.

Over behind the campers, a group of people are setting up what looks like a croquette court. “Are they…” I start.

Right then a car pulls in and Laurel whoops.

Four more guys get out of the car, each of them carrying two impossibly large McDonald’s bags. They move purposefully toward the tables, nodding their heads at the shouts and claps from the rest of the group.

Laurel puts a hand on my shoulder. “It’s happening,” she says.  She slips toward the tables. People are already eating hamburgers, high-fiving, bumping fists, nodding at one another with knowing looks in their eyes.

“Cheddar and ONION!” Josh shouts. He and Tommy bump fists.

The music stops and then starts again. “John Mayer about time!” Lee says. “Turn that shit up, y’all!”

I’m wondering if I’m being punked. Hamburgers? McDonalds? John Mayer and the Dave Matthews Band? This can’t really be what Laurel’s parties are like.

But then Laurel grabs a burger and takes a bite. She closes her eyes and smiles and chews and she’s beautiful and all of the sudden it’s like that part of her that’s secret, that she keeps just for her, is shining there in the late afternoon light, glowing, beckoning. I’m walking before I realize it. Then I’m running. As I get closer to the tables, I catch the first whiff of food – onion and cheese and a warm hint of grease – and I realize how hungry I’ve been all along.