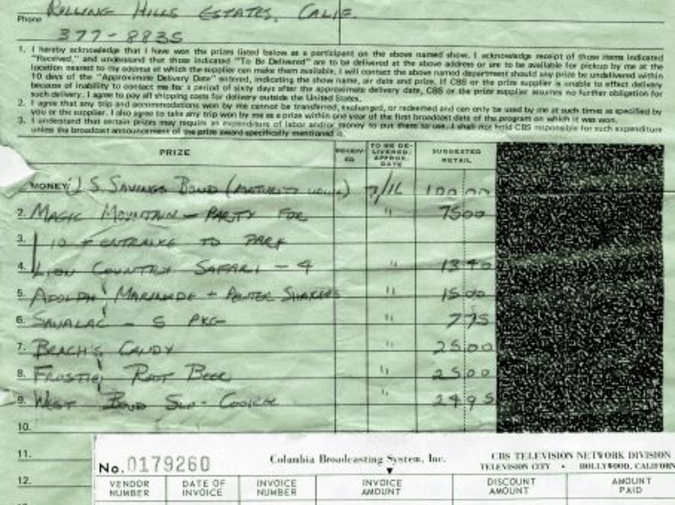 The girl is serious-eyed. Composed. Deferential, but not over-awed – she made eight trips to Los Angeles to get to this moment: kid’s week on The Joker’s Wild. Strawberry-blond hair parted straight down the middle, plastic barrettes which she fiddles with when her mother isn’t looking.

Lanky for age eight, and just as awkward. She smooths her dress, acts ashamed of its tiny flower print and frilly pinafore – not because they’re homemade, but because she’d prefer a t-shirt and bell-bottomed jeans – or anything else which might make her look older, more 1973.

The mother chats with the stage manager, smiles at the director, hugs her daughter. This isn’t mom’s first time around at CBS Television City: she dressed as a shady ladybug and won a color TV on Let’s Make a Deal. Now she makes friends with the production assistants in the green room: she’d never be an overbearing stage mom. You can’t see her more closely – after all, this is backstage at a game show taping. If you could, you’d learn she’s fragile, nervous, covering. That the dress was sewn by a neighbor. That they’ll move in two years. That she’ll fall.

The sets are flimsy, garish. Hard flats for walls lit up by banks of overhead lights. Two booths: one for each contestant. Each has a handle for spinning three wheels to pick a category. Hit the jokers and double your winnings. Hit a devil in the prize round and lose it all. A slot machine, normally for Adults Only. But this is the Easter Week taping, and it’s the first time they’re trying it with kids.

The mother introduces the girl as “Eight going on fifty.” The opponent is some boy, a year older. But really, who cares about him. The host, Chuck Barry, drags at a cigarette and taps ash while the makeup girl touches up his powder. He won’t let his role in the Quiz Show scandals tarnish his demeanor. He’s glib and unctuous and on-air sly. You don’t have to do retakes with him.

The girl eyes the hasty sets like she is the Wizard, not just peeking behind the curtain. You can hear her thinking, “Good thing this looks better on TV.” Wardrobe makes her change her dress, says it’s too bright white for the camera. She and her mother put on coordinated mustard-yellow. The girl won’t let you see whether she’s excited or nervous. You’d put a few bucks on her to win, if you could.

But I wouldn’t. I know what happened. The girl in the dress was me. We went down to the wire, the make-or-break question. The category: Silly Songs. Chuck Barry delivered the coup d’grace. I stared out at him or the wheel or somewhere – I didn’t answer, my mind went blank. The boy got it right, he won.

As I was a kid loser, I still got one spin at the prize wheel plus a bunch of loot from the show’s sponsors. These were my lovely parting gifts:

5 Boxes of Sanalac: I hope you don’t know what this is, because dried milk powder is disgusting. My thrifty rich grandmother took it off our hands: we drank reconstituted milk at her house for years.

$100 Savings Bond: Was supposed to encourage saving in young children. Instead, some harried coordinator cut us a check for 75 bucks instead of a 100 – because we “didn’t have to wait for it to mature.”

Brach’s Candy: Large carton given immediately to “Orphans in Mexico.” My mother was a good liar: I didn’t question this.

Meat tenderizer: Adolph’s! My mother never used it. It sat in her spice cabinet crusting over, a sad memento of my fleeting fame. In high school I finally threw it out. As for the gen-u-ine pewter shakers? We used those for regular pepper and salt.

Frostie Root Beer: Multiple coupons for multiple cases. I hate root beer now and I hated it then. My brother liked it, but our supermarket didn’t carry this brand. So, I got really popular handing out free soda pop at school.

West End Slo-Cooker My mother’s dinner rotation consisted of casseroles: tater tot, Frito-chicken, tuna or meatloaf. She must have hidden this on a back shelf so she didn’t have to look at it: I don’t remember seeing it at home.

Magic Mountain: The big prize: the one I won with my loser spin. A trip for 10 to the now Six Flags theme park, which for some reason came with a cake. Except it didn’t because the day we were supposed to go the winds came up in Valencia and they closed down the rollercoasters and my Dad drove us to Sea World in San Diego to try and escape the rain.

Lion Country Safari: Entrance for four (plus one auto) to this oh-so-70s drive-through zoo. We made a day of it, went to Irvine, just the four of us: my dad, mom, brother and me. We had a fabulous time, but who wouldn’t? You took your own car through the lands dedicated to various parts of Africa.

Giraffes or zebras or lions could walk up and eye you. There were many warning signs reminding you not to ever open your window. People who couldn’t resist the urge to let air in or take a picture, had summarily been mauled. (If you’re under thirty, you probably think I’m lying. Google it, you’ll see.)

The kids in school teased me, but it was before we moved and I was still popular, had friends. They were jealous to see me on TV. I think the ridiculousness of the gifts took the sting out of the failure.

Or maybe I was more pliable, then. This is what my mother wrote in my scrapbook: “Irene was poised and relaxed and a delight to behold when it aired over Easter week.” Later, less visible failures would leave bigger scars. Maybe because my mom wasn’t there to make winning or losing seem irrelevant. Maybe because I learned how better to hurt myself.

Recently, I searched hard and found the video on YouTube. My brother freaked out when I sent him the link. “Mom sounds exactly like you now,” he said. My opponent and I were the first children to appear on the show, and I should have known I’d find it online. Why didn’t I google it up long ago? Maybe because Chuck Barry asked my eight-year-old self if I had a boyfriend? Maybe because I lied and said I did. He steps on my joke when I tell him our mutt Darwin is part-Beagle. At the end, he consoles me for losing to “the superior male.” But I’m the same third-grader who got marked down for writing Ms. instead of Mrs. all through a dictation. His pat-on-the-head couldn’t have hurt me much.

Joker’s Wild is a family story which gets told over and over, although my mother is long since dead. When my brother had kids, he taught it to my nieces. They’d repeat the final question and tease: “Who chased the weasel around the cobbler’s bench, Aunt Reni?”

The boy who won got a devil on his third prize spin, losing everything. No trip to Magic Mountain for him. I hope his grandmother enjoyed the Sanalac. And those lovely, parting gifts.