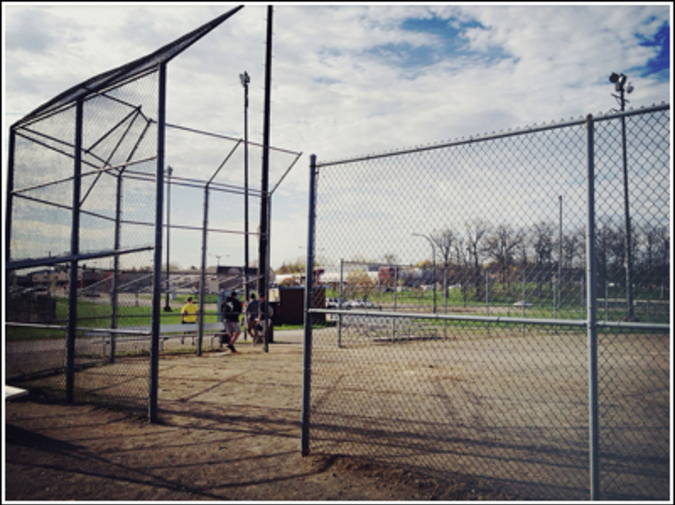 Often the biggest and most talented. Best arm on the team. A steady fastball, a heady game. Wise beyond his age. Perennial All-Star. Nothing to do with the fact that he’s almost always the coach’s son. Also one of the strongest hitters and will continue to be so until college. Plays short when not blowing away tweens in the summer. Plays quarterback and walks with his pretty girlfriend over vermillion leaves during the fall.

The burliest, sturdiest boy. Squats down for six innings because twelve-year-old tendons never tire. Checks the hitter’s eyes to make sure he’s not stealing signs, and flashes fingers that flicker like flashlight. One: heater. Two: curve: Three: “The (insert pitcher’s first name) Special.”

The biggest boy, but never pitches because his balls skid in the dirt more than they split the strike zone. Able to stretch and snag throws over his head with gangly arms that dangle at his side like awkward apologies. Throws headed towards Toledo. Often the clean-up hitter. RBI machine who the opposing parents claim, “Has gotta be at least, fifteen.”

Scrappy kid with a heart bigger than Wrigley Field. Golden glove that gobbles up grounders. The first one to cry when the team loses. The last one to change out of his dusty uniform after the game. Stat freak who could recite the longest hitting streak of every current starter for every major league team. Wears team cap to school and puts his favorite ballplayer’s baseball card under the bill. A weak hitter, almost last in the lineup, but a slap-bunt specialist. The smallest body, but the biggest mouth. Dreams of the Big Leagues harder than anyone else. Counts box scores instead of sheep. Turns double-plays in his sleep. 4-6-3... 4-6-3.

Strapping youth built for stopping one-hoppers with his chest. Cocky keeper of the hot corner. Hybrid doubles and home-run hitter. Potential to play any position. Shotgun arm gunning down runners before they reach the bag. Most likely to succeed at the next level.

Not necessarily a spot designated for the clueless kid. Slow runner. Not good with grounders. Often fat. But able to handle a bat. Resident funny guy who drives in his share of laughs and RBI.

Ideal lead-off hitter. Often the blackest kids since they’re usually the fastest. Speedy child who swipes bases and never looks back. This will serve him well should he decide to sacrifice baseball for other sports. Sports where his lucrative legs slow down just enough to position him for first-round draft status.

It’s no coincidence it’s designated the last spot in the field; also last in batting. Where the worst ballplayers go to hide, and eventually die. Position designated for the subs who (by rule) must play at least two innings in the field. Sometimes these kids want to sign up. Most often it’s their dads who want them to play. A ball hit to them is at least a double. Odds are, equal number of balls will be overran or fumbled. The crowd goes crazy at the routine play. Teammates understand who is out there, and find it futile to complain. Never the coach’s son.