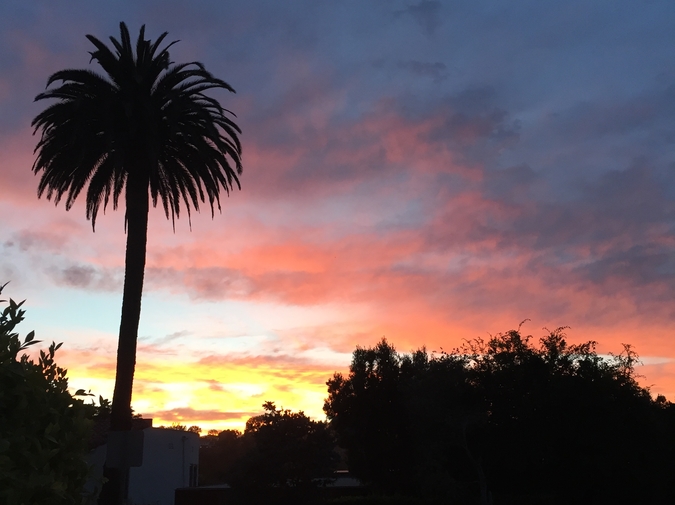 The more they tried to kill us, the stronger our marriage grew.

Our cars spun along the great boulevards and flipped over on PCH, but still we would kiss, ecstatic, when reunited at UCLA Emergency. We knew the sunset was bleeding pink and orange somewhere in the distance. That was enough.

They brought us plates of toxic urchin, slipped us suspicious vegan sandwiches, and poured out shots of that green liquid preferred by celebrities. Around three in the morning you would turn over in bed to take our weekly food-poisoned selfie, the two of us white and shaking, dark circles ringing our hopeful eyes.

I think someone’s trying to kill us, you would say, chuckling.

Were we wrong to move here?

When that guy at work tried to kill you, I walked to the hospital because both cars had been totaled. I was starting to get worried, but you sat up, against medical advice, and greeted me with a smile. This is going to sound crazy, you whispered, but I think Brian put out a hit on me. We cracked up: ours was the best inside joke in town, inspiring horror in every doctor we saw. They escorted me out of the room while plying me with one of those mood-altering drugs science had created for us.

And when that mountain lion came flying at us on the hike and bike trail, I loved you for trying to play with him. He was beautiful. You were beautiful together. We waved our arms around and tried to make ourselves look bigger than we were (good advice for dealing with mountain lions and for this city in particular), and he finally went away. He must have understood our love. He must have wanted our success. Our arms will be forever marked by the carvings he made. We could not stop laughing.

In moments of quiet I would ask if you had any regrets. If you wanted to leave. If we were wrong.

The earth opened. We had been told it would, but we never believed those crazy stories. How could we accept something so outlandish?

We held hands as rock turned to dust. I saw our future in this disappearing world, fiery mountains on one side, sparkling ocean on the other.

Are you happy?, you asked me.

So happy. This is great. It’s all I want.

Let’s never leave, we said, at the exact same time, and we have not stopped laughing.

Jan Stinchcomb is the author of The Blood Trail (Red Bird Chapbooks) and Find the Girl (Main Street Rag). Her stories have appeared in Longleaf Review, FlashBack Fiction, jmww, and Queen Mob's Teahouse, among other places. She has been nominated for the Pushcart Prize and Best of the Net Anthology, was longlisted in the Wigleaf Top 50, and was featured in The Best Small Fictions 2018. Currently living in Southern California with her family, she is a story editor for Paper Darts. Find her at janstinchcomb.com or on Twitter @janstinchcomb.