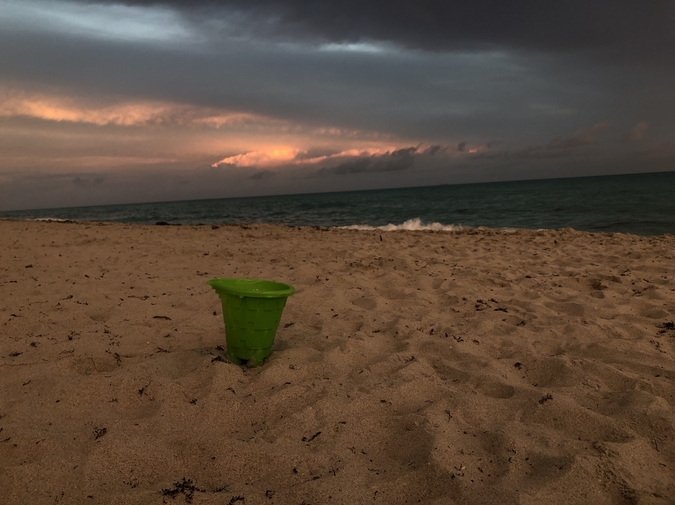 When we pressed our faces up through the dirt to gulp our first breath of air, the green and purple leaves that sprouted to mark the place of our birth were the first things we saw. Our face was the only part of us exposed to the elements, the sun warming our round cheeks and bald head. As we stretched our necks enough to see beyond the leaves, in our periphery, we could see each other spread out to the left and right and ahead, in rows neat as teeth.

When the men came and dug us up to make way for the next crop, it took a sharp tug or two to free our limbs from where they were entangled with the earth. We lost finger and toenails, bled all over the white blankets we were wrapped in. We piled in wheelbarrows and wagons, were hoisted onto the backs of trucks and, with the rap of knuckles against steel, were sent speeding out of the patch and through the tunnel. Looking back, it’s hard to remember if we heard the cries of the Mother Cabbage or if she let us go in peace.

Babyland General was our destination. After dressing us in onesies and bonnets, the nurses squeezed us in, eight or nine to a crib. They stuffed our mouths with pacifiers no matter how quiet we were. And we waited.

The Mothers began to arrive late the next morning, a steady stream of gaping mouths and wide eyes and gummy smiles made up of tiny white moons. The nurses were kind to the Mothers. Especially kind was Marsha, who was younger than the rest, with corn-silk hair that brushed our faces when she bent over to pull one of us free for a Mother to hold. She’d tell the Mother, “Oh, it looks like a match,” with a knowing wink, and the Mother would look shyly down at us before running off to beg an older Mother to be allowed to take us home.

At night, after the Mothers had made their picks for the day, Marsha would hum lullabies to the rest of us as she rearranged our bedding and shifted our placement in the cribs. The other nurses whispered about her when she wasn’t around. One called her Loca and said that she took this job because of her abortion. We only knew that an abortion meant that Marsha had a baby once and now it was gone. We had no reaction to this news, not like the nurses who were angry or sad. We only wondered why she got rid of it. We wondered whether Marsha missed her baby and if she would take one of us home one day to replace it. When we were with her, we only wondered if the warm of her cheek against ours was something we’d ever forget. We would.

The day we were chosen was always bittersweet. Never any time to say goodbyes. In an instant, we were whisked past the shelves of clothes and toys and bottles, past the row of cotton candy-colored strollers, and into the adoption room. There, the adoption certificate was filled out with our new name, the name of the Mother, and where our forever home would be. Some of the Mothers were too young to sign their own name so they drew a squiggle while an older Mother or nurse held their hand. Whether this was legal, we don’t know, but at the time we trusted they knew what they were doing.

The names they selected for us covered the spectrum from Alice or Sandy to Pinky or Rex to Princess or Love. We were named for other people, for what we looked like, for who or what they wanted us to be.

Then, the oath. The Mother clutched us to their chest and held up their right hand, not much bigger than our own. After they promised to always remember how special we were to them, there was a moment of silence, a space for the oath to solidify, take shape, and fill the void between the Mother and us.

This next ride was different than the one from the patch. This one was warm and slow and we were held by someone who had just promised to love us with all of her heart. Music filled the car, reminding us of Marsha’s lullabies. Already, her face blurred out of focus in our memories.

The Mothers’ houses were all green lawns, open floor plans, swing sets in the back. Oh, we loved it when our Mothers swung, with us in their laps or just watching from a safe perch nearby. The whoosh of their hair, the flail of their legs, the joy that burst when they reached the peak. Their toes stretched towards the sun.

Things were sweet and easy. There was an occasional younger brother or a dog who caught hold of us and some incidents involving spills and wet beds and washing machines, but our lives were good those first few days.

Then. Then came the birthday parties, the sleepovers, the afterschool tea parties. Show and Tell. We met the others. They told us their stories. How they were stuffed into boxes, their wrists and ankles bound to cardboard; the days-long rides in the back of a dark truck; the shock of light when the back door rolled up; shifting from forklifts to pallets to warehouses to more truck rides and stockrooms. The thin but impenetrable plastic that separated them from any kind of touch. They were at least together on those crowded shelves but, unlike in the patch, they couldn’t see each other. They could only hope that as they were pulled off the shelves, one by one, that they would not be the last one chosen.

After the holidays, when our Mothers’ noses turned red with the cold and ours did not, and they wrapped themselves in wool and fleece, the number of us who’d found their forever home seemed to triple overnight. We saw each other everywhere we turned—at the grocery store, the doctor’s office, and at school. Those of us with Mothers old enough to go always felt a thrill of excitement when we were packed into a backpack or dangling from our Mother’s hand at the bus stop.

But there, in the cubbies or on the playground, was where the stories got worse. There was a holiday those of us from Babyland General never heard of. Black Friday. It was as dark as its name promised. The older Mothers and Fathers were the ones who chose us, who sometimes fought for us. That they fought for us sounded nice, noble even, but what the others described, the elbowing and hair-pulling, the way they clawed at the boxes, suffocated us against their chests as they struggled to escape the crowds—it was nothing like the peaceful selection process at Babyland General. Some of the others were bought in bulk then sold out of car trunks in dark parking lots. Some were even stolen, smuggled in suitcases or stuffed into puffy coats. They were hidden in closets for weeks; whether they would ever see the light of day again, unknown. When they were finally freed, the squeals of joy of the Mothers was always a relief, but they couldn’t shake the days leading up to it. They would never forget the fear, the noise, and most of all, the hunger in the older Mothers’ and Fathers’ eyes.

When we heard these stories, we felt lucky. We were the lucky ones to have missed going through all that. Weren’t we?

After some time, we were all relegated to the same fate, regardless of where we came from. Good Will, attics, basements. Handed down to indifferent siblings whose attention flickered to us for only seconds before back to the screen of their video games. Lined up on garage sale tables where we were haggled for at best, tossed into a trash bag with chipped knickknacks and yellowed books at worst. Some of us were placed on high shelves, the only thing to touch us being the feather dusters of housekeepers. With all of this idle time, we began to think more about everything: the world and our place in it. Where we’d come from. Where we’d ended up. The Mothers and the Mother Cabbage too. The nurses whose names and faces we couldn’t quite remember. The strangers who called us cute and ugly and good luck and special. Who we were when we were no longer loved.

It wasn’t all bad. Some of our Mothers kept their oaths better than others. Some would eventually dig us out from cardboard boxes to hand us down to their own children, who would be even better Mothers than their own.

But as time went on, we all grew to cherish those moments when our thoughts could stop. When we were so distracted with the beauty or ugliness of life, that we forgot ourselves and what we missed. For many of us, these were the moments before the compactor or incinerator, when the world seemed to pause and give us a minute to collect ourselves before the end. For those of us who had a second chance, whose new Mothers treated us the way we were promised, those moments were found in our return to the earth—in parks, backyards and sometimes even a garden just like our first home. There, we could feel the sun on our head, the grass beneath our cheek, and we could pretend that we had any say in how long we stayed.

Andrea's writing appears in Third Coast, The Baltimore Review, Electric Literature, Catapult, McSweeney's Internet Tendency, and other places. She holds an MFA from West Virginia University and is finishing a novel, which was a semi-finalist for the James Jones First Novel Fellowship. She was born in Korea, adopted and raised in New York City, and currently lives in Washington, DC. Read more about her at: andrearuggirello.com