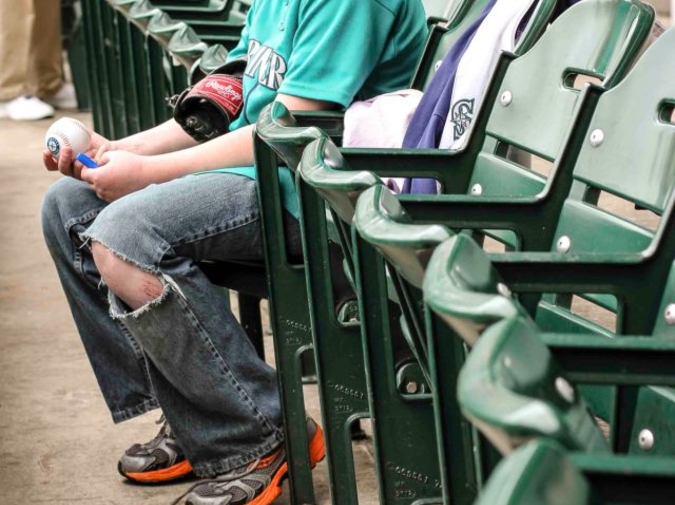 It was March 6 when Jonah Jimenez threw a perfect game in Spring Training, ninety-four pitches all-told, and fifty more than any starter was throwing then. If you asked anyone, it was ninety-four pitches more than Jonah Jimenez had any business throwing anywhere. When the Mariners were desperate enough to invite forty-five-year-old Jimenez to camp, his handful of decent spot starts and some long relief in Colorado last season didn’t matter—we remembered the more-often vicious shellings, the ugly numbers. Then The Whale showed up looking still a little more paunchy below that great barrel chest, his fingers like the cigars he smoked all off-season—nothing like the other older players trying to crawl back into the time machine, the ones remaking themselves sleek and lean.

But maybe we only thought he looked rounder, older, because he was supposed to, because he’d pitched badly when last we all saw him, because journeyman, junk-throwing nobodies aren’t supposed to last this long. We didn’t call him The Whale because of his size, either, though we could have. The nickname had been his since he was just a kid—it came with him to the diamond, not from it, and no one knew how he’d gotten it—and some of us remembered him pitching at twenty-five, all strange, large grace. His fastball never broke ninety-two, and now, maybe it hit eighty-five, and sometimes the ball just quit moving. That was the story of recent seasons—opposing line-ups crushed those breaking balls that never broke, fat as beach balls. But somehow, even in an inning where he gave up six runs before he got pulled, Jimenez made someone look silly. One of those wicked curves would break three feet, and the batter would be standing two steps out of the box, avoiding the plunk and watching the ball snap into the catcher’s mitt, right over the center of the plate.

On that afternoon in Peoria, everything was breaking, exactly as Jimenez wanted it to, and it was in the third inning, when he’d only thrown fifteen pitches and the whole Cincinnati side had topped balls into dribbling grounders or popped up The Whale’s filthy garbage, when the little flickers of electricity began filtering through the crowd.

In the third inning, it was more unexpected that the line-up of kids and nobodies—not a single starter out there—hadn’t muffed one of those grounders or threw the ball into the stands. In the fourth inning, Jimenez trotted out again, and one of us said, “Fifteen pitches isn’t even work. He’s probably supposed to throw thirty.” Because that’s how spring training works—it’s about assignments, about goals. Winning games isn’t really one of those. Everyone tries, of course, but even the trying is different. The games don’t matter; it’s about pieces.

When the Mariners put a few hits together in the fifth, Jimenez had a two-run lead, still perfect, but someone was throwing in the bullpen. A few other players—subbing in for right field, third base, shortstop—stretched. We could hear the conversation between the manager and Jimenez:

Jonah Jimenez took the mound. The manager stood at the top of the dugout steps as  another ripple filtered through the crowd, but the catcher squatted behind the plate—the guy who’d be there on Opening Day, not the double-AA backstop—and Jimenez tossed his warm-ups and the batter stepped in.

The sixth passed in only eight pitches. Those guys from Cincinnati wanted to hit, and the first two batters blunted curves off their hands, swinging bunts, and the catcher crabbed out quick, threw clean. The third worked the count to five pitches, full, but popped out to right.

At the top of the seventh, everyone could hear Jimenez say no, he wasn’t leaving the game, his vast chest a bellows. The catcher stepped in, and we heard him say, “What does it hurt?” and he meant what does it matter? because this was spring training and nothing mattered. Jimenez stepped in, too, tight to the manager’s chin, and the security guards in the aisles twitched, tensed, readied. The manager shrank in his white uniform, and Jonah went back to the mound. We saw the old glower around the manager’s eyes, and we agreed that this wasn’t done. The pitcher comes out when it’s time to come out—but The Whale pitching perfect through seven and then eight wasn’t done, either.

In the stands, we wondered what it meant, the way he’d said no. In the top of the ninth, the whole field was full of the Seattle starters, the center fielder with a range like Alexander the Great and wrists made of glass, the rooster-quick second baseman. The Mariners were going to work like it mattered, but we saw the pinched faces in the dugout, even the shiny-domed head of the hitting coach shaking sour and slow, and we had never seen him do that before. We had never seen anyone looking so grave and serious in spring training as we saw them look now. Jimenez threw his warm-ups, and he never looked at bench or bullpen, and we thought we understood: this game mattered to Jonah Jimenez, mattered enough that it—everything baseball for The Whale—could end, just here, in three outs’ time, and it probably would.

The first two outs came quickly, because those Cincinnati boys wanted hits so badly and one line drive even needed the center fielder’s gymnast dive, but they didn’t know what it was to truly want, not there in the box, ninety feet from Jimenez’s mound.

Then there were two strikes, and then the ball struck sweetly in the catcher’s mitt, and the batter’s legs buckled, the bat already around his body, his knee touching the dirt, and the umpire pumped his closed fist.

When the celebration ended, Jonah Jimenez left the field by stepping up into the stands, by walking out through the gates that all the rest of us used, too.

Holly M. Wendt teaches writing and literature at Casper College. She is the assistant fiction editor atDrunken Boat, and her writing has appeared most recently at The Classical, The Rumpus, Memorious,Stymie, and Bluestem.