It Matters What You Call A Thing 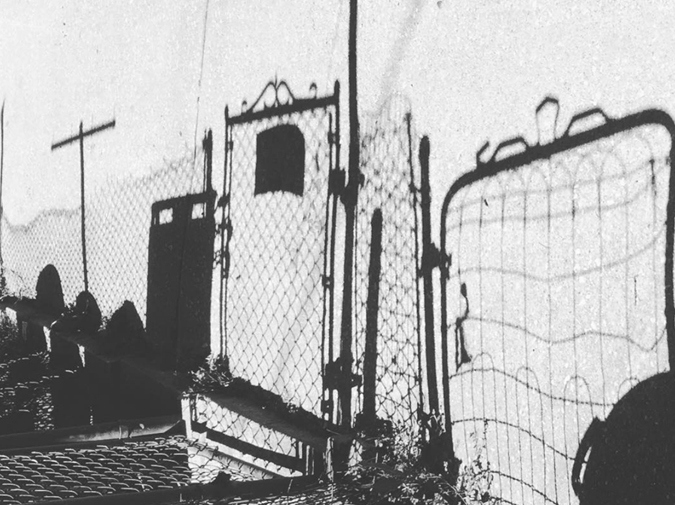 Alternatively, you can read straight through.

This is an essay about “divinity,” or, to be more precise: some of the ways that I perceive DIVINITY. It is ludicrous to even attempt to write about such a topic objectively, so this is an invitation into my SUBJECTIVITY. Be forewarned: I am INSANE, and a “fool.” If you perceive the world in a LINEAR, “chronological,” ordered way, and find any idea that disrupts that order repellent, please stop reading. This is not for you. All you will gain is frustration.

This story begins in 2014, when LOOK, a poem by Solmaz Sharif, induced a peculiar EXPERIENCE. I had never heard of her. It was at Bread Loaf, a writers’ conference in Vermont. Several poets had taken the stage. She was the last.

It’s not that the poem impressed me. I mean, it did, but it impressed everyone. The next day, I ran into two other writers, Roger Reeves and Ismet Prcic, and they couldn’t stop talking about her. Someone told me that Jamaal May cried. Or maybe it was David Tomas Martinez. I forget.

For me, it wasn’t simply the poem per se, but rather the experience that accompanied the poem, one that lasted three weeks. It is impossible for me to translate this experience into language, so I will only provide glimpses: violent vomiting, sobbing, insomnia. Actually, it wasn’t that I couldn’t sleep; I resisted it, because my dreams were dominated by a single, nameless figure: A boy.

Sometimes, when people talk to me about “divinity,” they describe it as pure bliss. For me, it has never been pure. I always feel its weight. Only after weeks of checking if the trash can by my bed is clean, only after walking through the world with tired eyes, unable to focus on what anyone is saying, only after my ducts run dry, only then do I feel the bliss. It never indulges me for indulgence’s sake. Rather, it purges and then comforts me.

How the fuck am I supposed to write about that?

I couldn’t even talk about it. I tried: I became a one-man PR machine for Solmaz Sharif, admittedly one with negligible impact. I screamed her name from the rooftops: in an age of disenchantment, the closest thing I’ve ever experienced to DIVINE REVELATION is the POETRY of Solmaz Sharif.

So, naturally, people assumed I had a crush on her.

Sigh. What kind of jackass would act this way over a crush?

So I just forgot about it. Until, years later, a “Divine pep talk” convinced me to write this essay:

Baba. Are you deluding yourself again? Are you convincing yourself that you’re so magnanimous? Are you afraid of harming an innocent person with this? And who, pray tell, would you be harming? Solmaz? How? By claiming that her work is touched, and insinuating that the reaction to it has been gendered? Yeah, that would really piss her off.

Baba. This is something you are meant to write. For Me. Don’t worry about maintaining the purity of it. It doesn’t have to be PURE. Just do your best. You will write it. I’ll save you the brooding, because you will need all your brainpower. Baba, you must EXPRESS. Otherwise, you will die of too many heart attacks. But you know…

If you would like to continue this thread, go to Part 99. If you’d like to read an elaboration on “divinity,” go to part 16.

The 90th Annual Academy Awards presented itself as a moment of INCLUSION. WOMEN and MINORITIES were to be celebrated. Greta Gerwig was nominated for BEST DIRECTOR, the first woman to be nominated in this category since Katheryn Bigelow’s victory for her WAR FILM The Hurt Locker. Jordan Peele became the first black man ever to win an Oscar for BEST ORIGINAL SCREENPLAY. The evening was punctuated by Frances McDormand’s acceptance speech for Best Actress, during which she asked every woman nominated to stand up. Then she announced the phrase that would momentarily dominate social media: “hashtag” INCLUSION RIDER.

During the ceremony, actor Wes Studi became the first Native American presenter at the Oscars. He spoke Cherokee, much to the delight of many viewers. Ironically, however, Studi used this rare platform to extoll the virtues of MILITARY SERVICE.

The message was clear: even during this moment of supposed inclusion, IMPERIALISM was not to be questioned, or even referred to by its NAME.

If you’d like to continue this thread, go to Part 20.

What’s love got to do with it? There is no place for romantic love in this essay. If you’d like to read about love, go to Part 23.

My mother often has DREAMS or VISIONS that reveal glimpses of the “future.” Before she retired, her co-workers would joke with her: “Aziza, your dreams don’t reveal anything about the future. After the fact, you go back and superimpose reality onto your dreams.”

Once, she saw my late grandfather in a vision. She often sees him in her sleep. He smiled and asked, “Why are you neglecting Samira (her cousin)? Don’t you know she needs you?”

As soon as she woke up, she called the co-worker she was closest to and said, “I just had a DREAM, and all I know is that Samira needs something from me.”

If you would like to read the conclusion of this anecdote, go to Part 33.

My mother is a Saudi women’s rights activist. I am not, though we often have conversations about what she hopes to accomplish. With regards to driving, a crucial point we discuss often is how it defeats the purpose to merely appeal to the state’s supposed BENEVOLENCE to allow women to drive. Rather, the very dynamic between STATE and CITIZEN must be examined.

“We” live out “our” lives at the intersection of AUTHORITARIANISM and IMPERIALISM. The former cannot exist without the latter. I’ve often heard that the role that the US plays on the global stage is that of the WORLD’S POLICEMAN. It protects “OUR” freedom. Note the lack of rigor in defining that possessive pronoun. While that metaphor may be more apt now than it was, considering how the dynamic between the police and people of color has become more visible and controversial in recent years, I prefer another metaphor. I see the US’s role in the world as that of the most powerful MOB BOSS, one who receives tributes from lesser syndicates. PROTECTION MONEY. The US is the world’s HEGEMON.

The relationship between Saudi citizen and state is that of WARD and GUARDIAN. While Saudi women are under more RESTRICTIONS than their male counterparts, the dynamic is true of both genders. We are all wards. If the wards appeal to the guardian to allow them to drive, and the guardian, in his benevolence, allows women to do so, is that really activism?

How does the American government fit into this dynamic? Whose freedoms are American troops fighting for?

If you’d like to continue this thread, go to Part 99.

Didn’t I tell you that there’s no place for ROMANTIC LOVE in this essay? If you’d like to read about that, maybe Nicholas Sparks could provide some assistance. I’m more interested in DEATH.

If you would like to continue this thread, go to Part 3.

My great-aunt Muneera called my mother and told her that Samira was in the emergency room, and that my other great-aunt (Samira’s mother) was hiding this fact from everyone.

My mother immediately called a friend of hers, whose husband works at the hospital, and told her that she needed her husband to pull some strings to get Samira a room. Later that day, Samira underwent surgery to remove her appendix.

My mother finds all of this, the overlap between the DREAM world and REALITY, extremely mundane.

When Solmaz Sharif opened her mouth on that stage, I looked up. At the thing hovering above her. The thing that is neither visible nor invisible, but rather transcends the sense of sight. I don’t have the language to describe it, but some might say that it is an “EXQUISITE FACE.” Others may prefer to call it “THE FACE OF GOD.” The term I prefer, in order to unburden it from any baggage, is DENVER OMELETTE.

Baba. You’re jealous, aren’t you? How does it feel to know that you’ll never be able to write as well as this? Does it make your pen feel like a butter knife? Is that why you’re jealous?

Baba. Tell me why you’re jealous. Tell me the real reason. Hint: I already know (duh.) You think this means I love her more than I love you, doesn’t it?

Baba. Do you think I am your god alone? Do you think of me as an object for you to put in your breast pocket?

Do you know this woman? Do you know what she has suffered? Or do you believe that you alone suffer, Baba?

Do you know how much she has excised of herself from these words? Have you ever written about something intensely personal in a completely detached away? Could you do that? Would you even want to? Baba, this writer has devoted herself to her craft in a way that you never will, nor do I desire you to. But that is not why I’m here, Baba. Many have devoted more to their craft. Do you know why I’m here?

And do you know what’s funny, Baba? Had she not made that sacrifice, it would not have changed a thing. She would have achieved the same success and acclaim. Nobody would have known. Perhaps she would have. And what sacrifice? A trifling. A sacrifice so subtle maybe even she isn’t conscious of it. Maybe only one who hears an ant’s footsteps on a black rock could note it: she sacrificed a personal truth in service of a greater truth. She decided that it was more important to be true to herself than to serve her truth. How could I not honor that, Baba? It would be ill-fitting. Unbecoming, to use their LANGUAGE.

BE. She has created a PRAYER that is sung out of TIME, marveled at, rejoiced at. Do you think I am ignorant of that boy’s name? Do you assume that that young boy will not receive his justice? Do you think they feel safe in their hiding places in their quaint little box?

Learn. Don’t worry about your writing. That has never defined you. Let her teach you how to refine what defines you, Baba. And remember, honor and love are two different things…

You know what’s funny, Baba? Only one thing would have changed if she hadn’t made those sacrifices: I wouldn’t have been here for you to see…

I can’t escape the influence of those words. I am a writer created by Solmaz Sharif. The title of the first short story I ever published in an American literary journal is lifted from The US Department of Defense’s Dictionary of Military and Associated Terms. This is the second essay of mine that contains a Solmaz Sharif lyric in the title. So when I close my left eye and train my right on imperialism and its scribes, I salute my sister-in-arms, utter, “Bismillah Al-Rahman Al-Rahim,” and then mumble my extended mantra to myself:

Whereas Is she hot, they will say: Now, therefore,
Let it matter what we call a thing.
Let it be the exquisite face for at least 16 seconds.
Let me LOOK at you.
Let me look at you in a light that takes years to get here.

Tariq al Haydar's work has appeared or is forthcoming in The Threepenny Review, Beloit Fiction Journal, DIAGRAM, North American Review and others, and his nonfiction was listed as 'Notable' in the Best American Essays 2016. He is an assistant professor of English at King Saud University in Saudi Arabia.