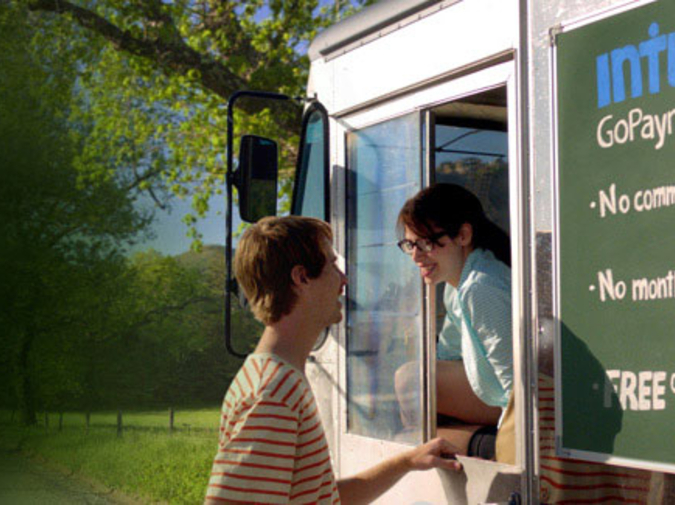 Derek barely slows down at intersections. Not anymore. Not since we got that card reader and “set out toward the sun.”

Right now, we’re somewhere in Virginia or North Carolina, barreling eighty miles an hour down 77 South. It’s been twenty hours since we left Columbus and we’ve only stopped twice – once for gas, and once when I told him I’d pee right in the truck if he didn’t pull over.

I can see the intersection up ahead, green interstate signs forming an entryway, a decision-point: we need to head west on 81 or stay on 77.  He glances at me and I look down, act like I’m paying attention to the little blue dot moving along the map on my phone, like I’m tracking it, planning, like there’s some kind of logic happening in our movements. Like we’re not driving an ice cream truck twenty-five miles over the speed limit with no direction other than Derek’s wheel-jerking intuition about a warm place to sell ice cream.

He gives me the look, the one he wants to say “isn’t this awesome?” What it really says is, “this has to be awesome. If this isn’t awesome, then…”

A text pops on my phone, Lupe again: “Are we opening? WHERE R YOU GUYS?” I picture her standing outside the shop with James and Tina, the college kids we hired this summer. First thing we should have done when everything started slowing down was let them go, settle up with Lupe, tell her there’d be an Assistant Manager job waiting in the Spring. There are lots of things we should have done.

The road signs are almost overhead. Derek laughs and spins the wheel to the right and the truck lurches, careens under the 77 South sign. We nearly collide with a UPS truck and all I can hear is the horn blasting, the sound so loud that even though I’m only two feet away from him, I can’t even hear Derek shouting “toward the sun!”

We bought the store soon after the doctor said we couldn’t get pregnant.  We looked at the alternatives – in vitro, international adoption – the cost was almost the same. “Transference” is what the marriage counselor called it, with a question in her voice and eyes looking right at me. Derek just shook his head, took my hand, said thanks but no thanks and we better not be charged for this session.

“We met in a fucking Baskin Robbins,” he said, while we were walking out the door.

I gave the counselor a look like Sorry, and she nodded her head in a way I knew meant Good Luck.

I wake up to the stop-go left-right of the truck moving through a neighborhood. For a groggy moment I think we’re back in Columbus, driving through Clintonville or the University District. It’s a nice thought – we had some good days this summer, days that made it seem like everything was going to be okay.

But then I sit up, check the phone. It is three AM and I have twelve text messages. Large McMansions roll by on all sides – glass and brick, two car garages, spotlights on landscaped yards.

The truck smells like ice cream and Fritos and sweat. My neck is cramping and my knees are sore. “I need to get out of this truck for a while,” I say.

“Soon,” he says. He slows down, looks from house to house.

“Do you know somebody here?” I ask.

He keeps on driving. On the right, a completely dark house. He cuts the engine and we coast to a stop. Derek gives me the Look, taps me on the leg, then runs around to the back of the house. I sit in the truck and wait, tell myself he must be going to the bathroom. Something. I check my first text. My mother: “Where are you we are getting worried.”

I lean back, close my eyes. How could I even begin to explain?

I’m not sure how long I’m asleep before the door opens and Derek comes in. He throws a gym bag in the back seat and starts the engine. “What was that?” I say.

The first few months of the shop, everything was great. We hired Lupe and the college kids. We were making money, working together every day. We were too busy to think about that word – transference – and the look on the marriage counselor’s face.

Then right before Thanksgiving, everything started to go sour. It was a bad Fall: cold and rainy in Columbus. There were days when we had more employees in the store than customers, weeks when we lost hundreds of dollars.

We stop at a truck stop.

“It’s getting warmer!” he says.

I look at my phone. Twenty four text messages. I don’t think I can even read them. I wonder if my mother has sent the police to the house, when Lupe and the kids finally decided we weren’t opening and went home.

Derek is right, though: it is getting warmer. According to my phone, we’re near Savannah, and the warm air feels like it’s hugging me, like all that’s keeping me from floating away are the shoes on my feet.

“Who said it was a bad idea?” Derek says. His hair has gone crazy. He needs to shave and I can smell him through the gas fumes.

It wasn’t so much that we couldn’t get pregnant as we didn’t know what to do next. That was the logical thing on the list, the next step. Right up until then, everything was going according to schedule: full time jobs, 401K, three bedrooms and two baths on three quarters of an acre.

We were careful people, methodical, and everything was working. And then, all of the sudden, it was like the plan itself had betrayed us. We came home, sat down on the couch, turned on the TV, and looked at each other.

Derek follows signs to Myrtle Beach and before I know it, we’re at the ocean. We stumble out of the truck and look at the waves. It is beautiful. Warm. Ice cream weather.

Derek turns on the outside speaker, flips the converter for the chest freezer, opens up a box of sugar cones and a box of regular, jacks the GoPayment thing into his phone. He turns on the music. I stand behind him.

There’s not a soul on the beach.

I check my phone. “It’s Thanksgiving,” I say.

He nods, turns the music up, and “Mister Softee” blares out over the empty beach.  I look to the ocean, the place where the waves turn from choppy to smooth.  I know we’ll stay here, knuckles gripping the welcome window like the sides of a life raft, until the sun goes down and the ice cream weather turns chilly, and it’s finally time to go home.