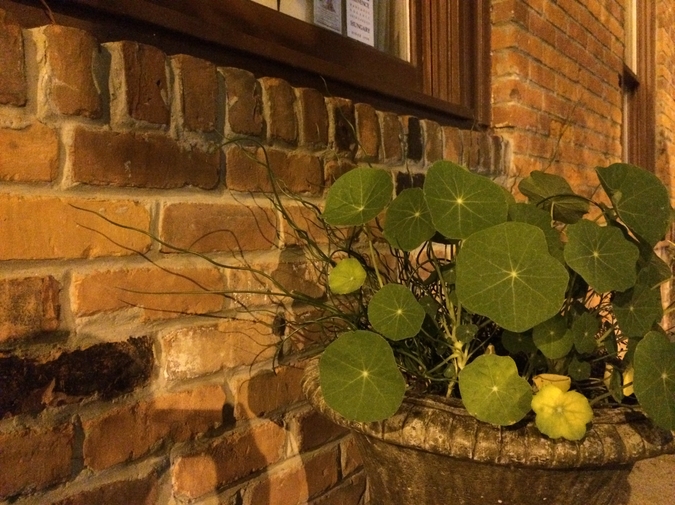 I started watering the houseplants on a regular basis—this

on an irregular schedule. As you can imagine, the sense

of accomplishment I derived from this was not overwhelming,

that people ought to do: maintain a life that is not your own life,

provide yourself with a routine that supports the life you want to lead:

a set of reliable behaviors that serve as an accurate representation

Basically, all that stuff the therapist says, but of course, I got pretty

bored with all that after a while. Sort of just decided, What’s the point?,

watering their plants and, over the course of several months, I went ahead

and created a new version of myself, using a complex procedure I found

somewhere on the Internet, involving a bathtub and no small amount

of exfoliated skin & hair & shaved whiskers & clipped toenails, and so on,

And then suddenly, another me: Someone to water the plants! Someone who knows

which plants require greater or lesser amounts of water; which plants

predictable one; which plants have succulent leaves in need of spritzing

monthly. (That, if you did not know, is in fact a thing that people do

with their plants.) Someone who will not go on superfluous drives at night

on the couch and listen to the sound of his heart beating in his skull.

a plant I did not even know I had. Hey, where did you come from, little Yucca?

No answer. OK. Anyway, so it went for a while: I’d tend to the plants

or sitting outside on the porch and smoking a top secret cigarette or two,

always returning to our common space in the living room. Always to find him

leaving. All for the better, I’d thought frequently. Really there probably is only

enough room for the one of us, I’d also thought/imagined he’d thought.

only proper to give the other his space, allow him the illusion of aloneness.

The poor fellow was, after all, just a recycled version of another version

of himself. Time went on like this. The plants thrived, and so did I, in a way:

each time I caught a glimpse of myself, I’d note that my body

had somehow grown into itself—that’s the only way I can put it:

my arms looked like my arms, legs, legs, torso, torso, and so on,

but there was also something different about them: a sense that they

held their own weight in a way they hadn’t quite done before. I felt

like how Pinocchio probably felt pre-lying about a bunch of stuff,

One day, it must have been winter, because my trips to the porch had become less

regular, and it was very cold out, we found ourselves eating

breakfast together, which was strange as I’d never quite seen him

eat before, which made sense, because he and I were on different schedules:

his, a plant watering schedule, mine a real-life schedule. But it also

once before then, eat something? Anything? Weird, right? Anyway,

I must not have found it to be too weird because that soon became our routine:

breakfast every morning with myself.

An orange usually, and a cup of coffee. Some mornings we ended up

with a bigger than usual orange, in which case we’d split it. Toast

some mornings, not toast on other mornings. Casual stuff. Not

a lot of talking, really. No talking at all, really. More of an unstrained

Still, we were most comfortable inside of the other’s silences,

the quiet that we let extend from one to the other: like a conversation, but not.

The whole shebang. And for me, Kombucha is weirdly a part of the whole

shebang given its high retail cost and its various probiotic mysteries.

This interested other me, and after reading the label, he had for me

a question. What is a mother? This is what he wanted to know. This,

his question. A good question. What is a mother? And sure, I had some answers,

but they were the kind that make for even more questions, and this line

of conversation, I could see was sure to get sensitive, and so I read to him

from the label about how the drink was fermented, how the yeast

and the bacteria at the top, which looked like a weird jellyfish, was called,

of all things, Mother. And so, it was around this time that he stopped eating.

What’s the point? I’m sure he wondered. Daily he could be found not watering or spritzing

or mayonnaising the plants. Nightly, he’d sleep a light and disturbed sleep,

fascinated by how, no matter how many times he’d gone and watered

and taken care of them previously, without him now the plants were starting

to turn: their leaves cupping into themselves, their edges crisping up like little

pepperonis. I made for him food to eat. Some of his favorites. Caleb, I would say,

eat for me this smoked pork posole topped with a beautifully poached egg, this seared

grouper cheek in a reduced yellow curry sauce served on a bed of saffron rice. Caleb,

eat for me this pepperoni pizza that I ordered from your favorite pizza place. Caleb,

do not waste away anymore like the plants have begun to waste away: even

the mysterious yucca looks like it will surely die. Caleb, do not die. Caleb.

Force feeding did not work. You have probably tried to force feed someone

something before, no? You know, then, how it is not the sort of thing

that really works out too well in a scenario like this. Moreover, you know

the ways in which you are powerless, even against your own will,

much less the will of another. And so that is what I came to expect,

or rather, allow: the slow degradation of the body, my body, a body

I’d eventually come to hold in my hands and carry with me to bed at night,

a body I would bathe with, walk with, hold with me for days and days,

for days on end, I am telling you, for days until the day I thought

he had died, and then even longer until the day that I heard him whispering.

Dead, or alive, he was mumbling, pleading with me, and no, not for food.

Not for water, but pleading nonetheless, pleading, Caleb. Eat me, Caleb.

Can you hear me? Is that you, Caleb? It is time. The time has come, Caleb.

Caleb. Eat me. Caleb, even that mysterious Yucca is now dead, you can eat me now,

Caleb Curtiss' body weight fluctuates within a range of approximately 10-15 pounds depending on the season. His writing has appeared in Ninth Letter, New England Review, TriQuarterly, and most recently, The Collagist and Fugue. Catch him online at cdcurtiss.com.