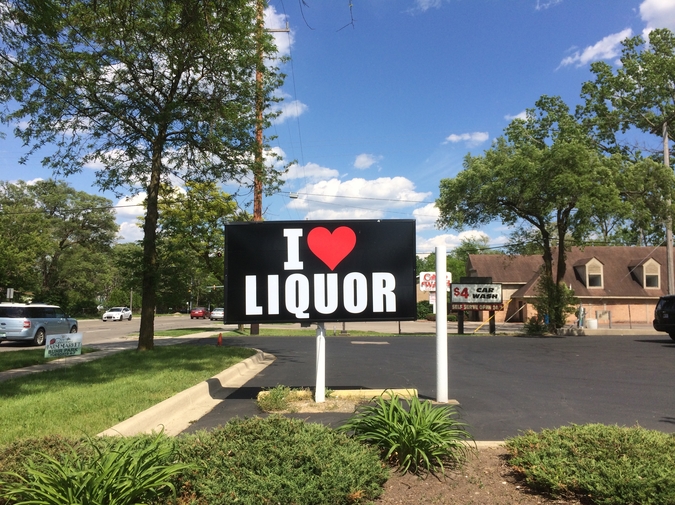 Hari kari is another word for seppuku, the ritual suicide a samurai performs when he’s lost his honor. It’s the thing where the samurai takes his sword and disembowels himself. Hari Kari is also the nickname my buddies at Nick’s Tavern call me. Cynthia came up with it. My real name is Daryl, but I think at least one guy at Nick’s really believes I’m Hari Kari.

Cynthia started calling me that sixth months ago. One night I was driving back from Nick’s Tavern, cocked off my ass. I was leaving Cynthia’s divorce celebration. She had just dumped her husband, Billy. I like Billy, but Cynthia will be better off without him. Billy drinks until he blacks out and pisses himself. He gained 75 pounds since him and Cynthia got together. He wears stretched out wifebeaters like a surprised suspect on an episode of Cops shot in Tucson, because that’s where we live.

Cynthia and Billy ride Harleys. They’re bikers. Me and my girlfriend, Lindsey, we’re regular people. We were in the National Guard, we’re both fans of the Arizona Cardinals. Cynthia likes the Raiders even though they never win. Not that the Cardinals do, but whatever. We all like darts and Lindsey will play with us sometimes if we go somewhere others than Nick’s. She claims people grope her at Nick’s. It’s probably true. Lindsey’s a clean cut girl, buys our clothes at Old Navy. Cynthia wears leather pants and cut off shirts. She thinks it’s funny to yell “Get your fucking hands off me!” at anyone who bumps into her. Billy has a shirt that says on the back, “If you can read this, this bitch fell off.” It’s what Cynthia kept saying at the divorce party, “This bitch fell off!”

I wasn’t supposed to be at the divorce party. I told Lindsey I wouldn’t go because Lindsey was mad at Cynthia. Cynthia gets into all these multi-level marketing schemes and harasses everyone on Facebook. She sells essential oils and posted publicly, “Hey @LindseyWilliams! When do you want to try my essential oils and start living eczema-free!” So now everyone knows Lindsey has eczema. I never should have mentioned Lindsey’s eczema to Cynthia, but, as bad as Cynthia is with the oils, I think the dildos were the last straw for Lindsey. Cynthia had a sex toy party and she tried to sell Lindsey a strap-on and suggested that she peg me. Lindsey thought Cynthia was trying to sabotage our relationship.

Cynthia’s a great time in my opinion. We’ve known each other since high school. We never dated because I was friends with her brother, Ricky, and Ricky wasn’t cool with it. When Ricky died, we got wasted at Nick’s after the funeral and we’ve been meeting up there for the last couple years.  Lindsey’s great, but I do think she’s jealous of Cynthia’s free spirit. I get that Lindsey doesn’t like her, but Cynthia and I have a lot in common. We’re both Aries, we dig casinos, we drink Dos Equis. She drives a Mustang and I drove a Mustang until Lindsey convinced me to trade it in for a sedan to save money on insurance.

I drove that sedan into a parked cop car on the way home from the divorce party. I wasn’t paying attention to where I was going and I was drunk. It was already 7:00 and I was supposed to go with Lindsey to her daughter’s play. I like her daughter. She’s a good kid, even though Lindsey named her Starlite. Sometimes I look at Lindsey and I wonder how the fuck did you name your kid Starlite? I remind myself that Lindsey was only seventeen when she came up with it and I try to be understanding even when Starlite comes home from school with “Starlite, Star bites, worst Star I see tonight” vandalized on her book cover. Like many kids in her situation, Starlite has lumped herself in with the drama club crowd and now she’s in all these plays through a local theater group and they mostly start at 7:30. The theater is more than thirty minutes away from Nick’s Tavern.

This time, Starlite was in a knock off of the Breakfast Club called Saturday Detention. She played the kid sister to a spoiled rich teenage girl who, according to Starlite, was played by a spoiled rich girl. Starlite only had two lines: “Like, whatever!” and “I’m totally over it.” She practiced them over and over. I heard her mouth off to her mom a few times and then claim she was in character when Lindsey got mad. Starlite’s a smart kid.

Starlite’s previous performance was a 21st century Merry Wives of Windsor in which the female lead looked a lot like Cynthia. I missed the first half of it. The gang was celebrating because Cynthia and Billy bought a house together. Cynthia lives there now and Billy is at Extended Stay America trying to fuck the housekeepers. I heard that from Cynthia, so I take it for what it’s worth.

Lindsey threatened me with another trip to couple’s therapy if I missed Saturday Detention because I was at Nick’s again, so when I hit that cruiser, I freaked out. Fuck couples therapy! The first two times we went to therapy, a woman in her fifties with a crystal pendant hanging between her breasts tried to convince me that the reason I am irresponsible and refuse the grow up is that I haven’t forgiven my parents for their shortcomings, like drinking heavily and whipping me with a belt. But I totally dig my folks, they’re super nice, my mom always makes me Reese's pie and my dad grows weed in my old bedroom. We’ve let bygones be bygones. I asked the therapist why we would go so far as to introduce my parents into my relationship problems when most likely it's that I only lack energy and direction to do the things Lindsey wants me to do and that if she were to stop trying to control my time, my alternatives to Nick’s Tavern and Cynthia would be working on cars and homebrewing, things I actually enjoy. Don’t get me wrong, I want to support Starlite, but I don’t want to sit in a stinky theater and watch strange nerds overact because my girlfriend’s daughter danced for two minutes behind the main characters at the outset of the play. That’s boring.

The therapist kept saying I should “speak with honesty” and “be honest,” which really mean “this is what we want to hear,” so I said I would cut way down on drinking and stop hanging out at Nicks, though I had no intention of doing either until I was rolling along the street, texting with Lindsey about my estimated time of arrival and I felt my sedan drift into the front driver-side quarter panel of that stationary cop car.

So this is why Cynthia and the crew at Nicks call me Hari Kari. I keep a knife in the driver side door in case anyone tries to carjack me. It’s a smallish buck knife. The blade folds out of the handle. When I saw the red and blue lights, I had a vision of slumping into the passenger seat of Lindsey’s car so she could drive me to work, her profile looking straight out the windshield, disgusted and dominant because I got a DUI and I lost my license and I was dependent on her. I grabbed the knife with both fists and I drove it into my abdomen, off to the side where I would hit mostly fat and skin. I don’t know if it’s because I was drunk, but it slid in way easier than I expected. It felt like snapping a rubber band on my skin, then this insane throb went right through me. Holy fuck it hurt. It bled a lot right away, which I guess was good because by the time the cop got to my window and shined his light in, I was heavily drenched in gore.

“I got stabbed,” I honestly told the officer. He radioed an EMT, pulled on his rubber gloves and applied pressure to my wound to slow the bleeding. The streetlight glowed off the sweat on the cop’s forehead. I thought how different this felt from getting a DUI. Cynthia got her DUI when Billy’s license was still suspended from his DUIs. The cops didn’t cut them any slack. Instead of giving me a breathalyzer, this officer was checking my pulse, telling me to stay calm and everything would be OK. What I good guy, I remember thinking.

I texted Lindsey from the ER and told her I got stabbed. She was at Starlite’s play, but she wanted to leave right away and come see me. I told her not to. I was alright, I was resting, and I was headed for an MRI soon. Visiting hours were over anyway. She could come first thing the next day. It took some back and forth texting, but I’m glad I got her to agree. When she came the next morning, she kissed me and ran her fingers through my hair and told me several times how happy she was that I didn’t die. I told her I loved her too and I thought how nice it felt to be loved. I thought of Billy, alone in his room at Extended Stay America while we partied at Nick’s. Again, I imagined depending on Lindsey for rides, her disappointment and having to explain to Starlite that I was a scumbag drunk driver. Maybe she wouldn’t have driven me around and I’d be stuck at Extended Stay splitting the cost of Uber rides with Billy.

Around noon, a detective came and took a report, asked me to describe the incident. I said I was leaving Nick’s Tavern and a white male in his early forties came from the side and stabbed me one time, very quickly. The officer guessed it was an attempted carjacking. They asked if I knew the person and I said no, but there was something familiar about him.

After they took the staples out, I went to Nick’s Tavern to celebrate and I made the mistake of telling Cynthia that I really stabbed myself. She told everyone else. She came up with Hari Kari pretty much right away. Cynthia comes up with some clever shit. The name doesn’t bother me. I actually kind of like it. It reminds me that sometimes honor takes sacrifice.

Eric Aldrich lives in Tucson, Arizona where he teaches writing and
literature at Pima Community College. You can find his most recent fiction
in Manifest West, The Worcester Review, and Weber: The Contemporary West.
He reviews books for Heavy Feather Review, Full Stop, Terrain.org, and Rain
Taxi Review of Books. Follow @ericjamesaldrich on Instagram for new
reviews, sunsets, and coyotes.