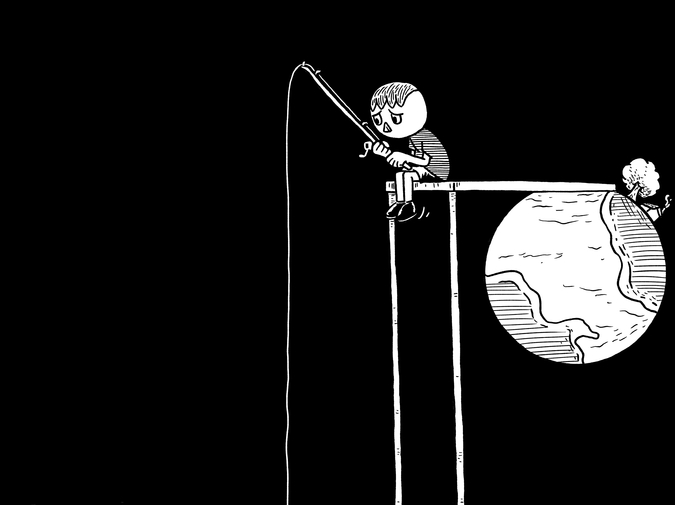 I couldn’t have my Wii hooked up and not play Animal Crossing. That would be like fries without ketchup; Vegas without blurry duck-faced selfies. Matt let out an uneasy chuckle when he saw the game case sitting on the bedroom dresser. “I’ll see you in a few months then,” he said.

“Oh come on. I’m not going to get that into it this time. It’s just for old time’s sake.”

“Uh-huh. Research purposes and all. I get it.”

I didn’t expect to get sucked into Animal Crossing all over again. I had much too much going on to care about a game with no point, a game that does not end. You move to a town one day with no back story or resources and build a life. There are fish to catch, bugs to net, neighbors to meet, coconut trees to plant. You can show off elite status by netting rare furniture for your expandable house, like the Master Sword or a Mario Kart. The game is played in real time, with each day tweaked according to the seasons. You can play for hours each day or check in once a year. The town is still waiting, with holidays and events rolling along with or without your participation.

It sounds ridiculously boring. And it is—there are no dungeons to puzzle through or bosses to button-smash to death. But the gentle music and ever-changing landscape are hypnotizing. Just one more fish, I keep telling myself, one last walk down this beach for treasure, and suddenly it’s midnight.

At least, that was the old version of me. The 16-year-old edition of myself, when the first Animal Crossing was released on GameCube. That may sound too old to be interested in a game where talking to squirrels is a major plot point. But I was a 16-year-old with a Sailor Moon backpack who spent whatever allowance she generated exclusively at Sanrio, so parading through a bucolic cartoon wonderland was a perfect Toonami lineup chaser.

In 2008, when a revamped Animal Crossing game appeared on Wii system, I was a 23-year-old, laid-off casualty of the Great Recession with zero job prospects. As far as I lowered my search standards, there was a pile of applicants 100 deep that were more qualified and experienced, and just as ravenous. In a bottomless well of desperate talent, I was nothing. The hopelessness ate me alive.

But in the Animal Crossing town, everyone needed me. “Our town is doing great because of you!” the turtle mayor proclaimed. Every day was another unanswered resume or dead-end phone interview. I couldn’t lift my eyes without a reminder of my irrelevance. I needed to matter somewhere, even if it was to an elderly animated turtle.

Looking back on those long-ago selves made me squirm. How sad, how embarrassing, how fucking pathetic. “I’m not that lame little person anymore,” I vowed to myself. I had a day job, freelance gigs, a husband, cats, True Detective to watch. A year into our move to Tucson, and I had way too much life going on to need Animal Crossing.

At least I thought I did. I wanted to believe that I was over leaving home behind, but the Summer of the Video Game had been over for months. The stifling Arizona days that trapped me inside with old controllers and a screen cooled off ages ago, but I kept reaching into the box. From between extension cords and dilapidated game guides there were more cartridges, more chances to dip into the past. What started as a way to pass an unbearable season was now creeping up on a new summer, and instead of staking a place in the new world, here I was. Inside. Again. About to burrow into the most addictive, time suck of a game I owned. When I started playing Mario, I only had one star left. In Hyrule, there were only so many dungeons to hide in. Animal Crossing never ended.

I popped in the disc and turned it on.

Be there in a minute, I texted Matt, who was on the patio. One more fish.

Two weeks later and I hadn’t gone a single day without visiting my town on the Wii. I couldn’t. What if I missed something? Animal Crossing tapped into that turn-of-the-millennium competitive streak of Pokemon cards, Beanie Babies and state-edition quarter maps. There was always one more elusive piece of the massive puzzle to track down. I was chomping into my writing time, ignoring the cats, leaving Hart and Cohle parked on my DVR.

Moving in was so easy. All of the neighbors were instantly thrilled that I was there. They sent letters with peaches and pears, asked my opinion on all of their important life decisions (“Is this outfit cute or totally lame?”), insisted I make an appearance at all of the town festivals. In this idyll, when you appeared, you had Arrived. There were no awkward, stunted conversations at the Meetup groups I’d forced myself to go to because I had run out of ideas on how to meet humans. There was no being stood up by the same new acquaintances over and over, making me feel pitiful for even trying. I didn’t have to get the city involved in a dispute with my neighbors over their pack of five poodles that loved howling more than breathing.

Nintendo made it look so easy to escape. Running from one end of the miniature world to the other, my frustrations flat-lined. The chatter muted from its all-day reverie of my inadequacies: you’ve made no friends! Everyone back home’s already forgotten you! In the imaginary new town, there was no wondering of whether I was being overdramatic or whiney or antisocial. Everything—really—was okay.

“Come on, you’ve been playing that all afternoon,” Matt said, now inside the bedroom drawn into a shaded den, the only light pulsing from the fake city screen. “Let’s go to the store or something. There will always be more fish,” he promised.

I gazed at myself reflected back from the turned-off TV: greasy hair with a crown of brown roots ringing the fading blonde, 2004 Portland Cheese Festival t-shirt now complete with Swiss cheese holes, hiding in an unmade bed. How quickly I turned right back into those younger selves, the ones supposedly dead and buried. I ducked into the bathroom to deodorize the feral off of me.

When we got back from our grocery shopping, we sat down for the mutual distraction of premium cable. Watching the character’s lives unravel had an opposite Animal Crossing effect—at least my life wasn’t that bad. At least I wasn’t that cynically dismissive of humanity (yet).

Is that all everything is now? I wondered. One series of distractions after another? When would I be a normal person again, someone who doesn’t hide behind pixels and plotlines? I should have already gotten over sadness, become used to a new place, resumed happily on the path Forward. Instead I kept retracing my steps in a rutted, endless wheel of homesickness, epiphany and temporary acceptance.

I couldn’t shake what Rust mused in True Detective, about time moving in circles instead of the straight paths we sketch through timelines and textbooks: “This is a world where nothing is solved. Someone once told me, 'Time is a flat circle.' Everything we've ever done or will do, we're gonna do over and over and over again.”

I didn’t understand him until turning back on the Wii, circling around the same fake video game town I have since I was in high school, jamming the same buttons and hearing the same song cycle that would play without end until the planet collapsed on itself. Time may not literally stand in an endless loop. We aren’t crystallized in one moment forever. Our personalities, though, they never change. Not really. We may grow up, sooner or later, expand our knowledge and spirituality or whatever, tweak what bothers us or gets complained about in group therapy. The tragedy of experience may soften or harden the façade we craft, but it can’t replace our cores. I will always be that nerdy little girl in a Sailor Moon backpack, hoping to make a friend, terrified of looking as though I need one. And I was the same girl in high school, and at my first job, and when I got my MFA, and now moved to a new state.

When I plugged in my glitchy Nintendo 64 last July, I posed the question on my keyboard: who was that girl obsessed with these old games a technological eon ago? Who was she replaced by? I end on this answer beneath the veneer of wisdom and evolution and grace, the slick gloss that hides the humility and the truth and the rot. The girl is the woman. The gulf between them is only as great as the grown one denies that she is nothing but a complication of her past.

I’ll never be over losing my home. I’m never over anything. I just keep burying it, sniffing it out, digging it back up all over again.

The game goes on, no matter how many times we hit reset.