Games of My Youth: Fifty Shades of Lelda 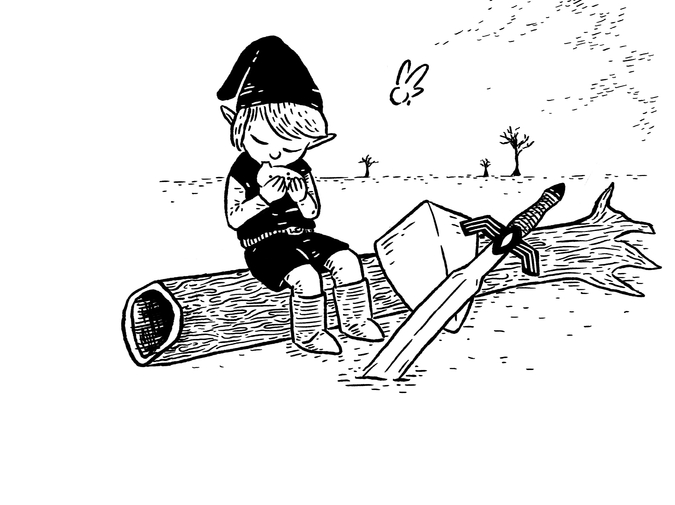 Previously, in "Games of My Youth": The Summer of the Video Game will also go down as The Summer I Moved. Not across town, not from apartment to house. This is the year we made a leap from Portland to Tucson, forced by my husband Matt’s job. In March, after only a month of prepping, we left our lives for a city neither of us had ever seen...

My favorite video game lives in an ark. Surrounded by artifacts packed in a Rubbermaid tote box, The Legend of Zelda: Ocarina of Time was next on my Summer of the Video Game list of must-plays.

The tote box held the sum of my 1999 babysitting earnings, converted into collectibles through the power of eBay. At the top of the box was my ocarina, painted purple with gold Triforce detail, crafted by an artisan who forged the instruments for Peruvian flute bands. I peeked below and found my Link Pez dispenser, gumball machine figurines, and my complete set of soundtrack CDs (including the symphonic and club remixes). The bottom of the box was lined with my precious doujinshi, Japanese tribute comics. I can’t read the stories, but I love flipping through the airy artist concepts of Link and Zelda, along with the periphery Hyrule residents. Free of their programmed limitations they cry, scream, rage, guffaw when Pikachu makes a cameo appearance.

This had been a dangerous, anything-goes vortex for my idle imagination.

When released in late 1998, The Legend of Zelda: Ocarina of Time was massive. After selling nearly eight million copies worldwide, the game is still being played, re-released in 2011 for the handheld Nintendo 3DS. The glory of the Nintendo 64 living room, now in pocket form.  But the idea of experiencing the greatest game ever programmed on a Candy Crush screen was as nauseating as drinking an Orbitz soda. I had to return the same way I’d arrived, hence the raiding of the lost ark.

Absent from the box is my contribution to the unofficial Zelda canon. My fanfic novella, written my freshman year of high school, was (thankfully) posted under a pseudonym and only to a website that hasn’t had an update since 2006. I scrawled paragraphs in geometry class and went on 5,000-word weekend writing binges, convinced that I was creating the deepest, most magnificent story ever told. A year after the night I teared up typing THE END, I re-read the first ten pages, then snuck the only printed copy out to the recycle bin. I doused it in a can of root beer, just to be safe.

“It’s mature fanfiction,” I said, waving my hands in front of the screen to block the words.

“Lelda?” He read between my fingers. “You named Link and Zelda’s daughter Lelda? So if we have a kid, it’s going to be Mabitha?”

“I was 14,” I said. “And Zelda had an inspiring story, okay?” My story, naturally, was not great. I mishmashed Ocarina of Time characters with Frankensteined anime plots I watched on Cartoon Network. Princess Lelda, heir to Hyrule, was born too powerful for her own good. Triforce inbreeding, if you will. She was everything I wasn’t but dreamed of becoming. Stunning. Desired. Captivating. Destined for some place, someone, something.

After Link perished in a fishing accident (he’d given up being a badass because PTSD or whatever), Queen Zelda became a raving alcoholic, lost her mind, and promised Princess Lelda to the evil Ganondorf’s secret nephew. Cheated out of true love with a stable boy, Princess Lelda ran away to start a candy shop (I’d just seen Chocolat). After an affair with a disillusioned assassin sent to drag her back to the castle, Lelda was eventually discovered by her wicked betrothed, kidnapped, and magically brainwashed into a sinister sex-and-kingdom-destruction puppet. Yes, I was a virgin writing BDSM-lite, copyright-infringing erotica before the billion-dollar cottage industry sprang up.

Replaying Zelda now wasn’t just reliving my favorite game. It was a sanity check. I couldn’t have inferred that entire subplot from thin air, right? I mean, yes. I plagiarized everything I could touch. But there had to be subtext, fodder, some kind of inspiration in the game. I wanted to discover what had turned me into a fanatic. I wanted to feel inspired again.

Despite being stretched onto a 21st century widescreen TV, , Ocarina of Time held up fairly well through a millennia’s worth of technology changes. There is a natural, subtle realism to Hyrule Field and the distant terrain of Death Mountain and Hyrule Castle. Much less jarring than Mario’s jagged, cartoonish castle world. I jumped into a saved game from the last time I had played: summer of 2005, when Matt and I had just started dating.

Eight years later, I sat in the bedroom while Matt beat up hookers in the living room playing Grand Theft Auto 5. This is what marriage crafts; a mellow sense of harmony.

Unlike Super Mario 64, I didn’t have any unfinished game business in Zelda. I beat the quest five times over, collected every hidden spider token, uncovered all the Pieces of Heart. Like today’s exhaustive landscapes of Skyrim and Albion, Ocarina of Time invited you to stay a while, to wander off the storyline’s path. I played the game inside-out, sometimes wandering through the field or desert or lake just to be there, to cast my line at the fishing hole and snag the Hylian Loach one more time, to hit another perfect score at the shooting gallery. To make sure that I hadn’t missed a single pixel.

Did I really have nowhere else to be that summer in 1999? My best friend had a boyfriend (as usual) and I didn’t (as always), and the couple spent most of their time at Tiffany’s Skate-In. I wasn’t invited, but I didn’t like the boyfriend or the rink anyway, with its nauseating smell of varnish and rotten feet. I didn’t have a car, or anywhere to go. My sister Brianna, hoarder of the cool-kid genes, was at cheer camp. It was a summer on my own, too old to be amused by the park and picnic trips of my childhood, not yet old enough to have an articulate will of my own. In our rural hometown of Buckley, Washington, a gas stop on the way to a ski resort, there was nowhere worth being. I could immerse myself in a new world or create my own. Between Zelda and Microsoft Word, I did both.

The saved game file left off at the Lon Lon Ranch quest, where you earn Epona the horse. The ranch is home to Malon, a sideline character I knew as the girl with a tragic, one-sided love for Link. She was a lowly ranch maid, after all. Not the Triforce-laced Princess of Hyrule.

When I found Malon in the stable, she looked the same way I remembered her—head down, shoulders slumped, clutching a bucket of milk. But she seemed much more concerned with current world events than winning over a forest boy’s heart. “Since Ganondorf came, people in the Castle Town have gone, places have been ruined, and monsters are wandering everywhere,” moaned her dialogue box. Her father’s former employee, Mr. Ingo, had taken over the ranch in an undescribed coup, but if she says anything about it, “Mr. Ingo will treat the horses so badly.”

Even after I saved the ranch, Malon was wholly uninterested in anything but her herd of ponies. “Do you remember me?” she asked after realizing that Link was the same kid she’d met as a child. “I was sure it was you because Epona remembered you! Thank you, Link!” End scene.

Same thing with Princess Ruto, the fish goddess who tricked Link into an engagement when they were kids. I recalled a fierce, conniving diva, but in reality, she gave up the idea of pinning Link down within two lines of post-mission dialogue. “I have to guard the Sacred Realm as the Sage of Water,” she said, encouraging Link not to give up on finding Princess Zelda. Not even the vaguest hint at a quick tryst in the ice cavern before saving the world. As I ran around the lake, I felt like I was missing something. Where was the visceral sense of being on a shore that I used to feel? The water and surrounding thicket were competent. The tree trunks looked like tree trunks, albeit slightly sharp ones. The water rippled in a constant, predictable direction. Clouds meandered, the sun slipped into a molten farewell, the nightfall eked shadows. All the parts were still moving, but I wasn’t there. As much as I wanted it to, my disbelief refused to suspend.

Where had I been, exactly, that had commanded all of the playing, the collecting, the writing? Nothing looked or sounded as epic as the legend in my head, or the complicated romance I teased out of these cardboard characters. Years ago, their monologue-box lines resonated with power and relevance. Now I read them with a sing-song sarcasm, mimicking the severe dorkstress that I was.

I turned off the game and wandered into the living room, feeling disgusted with myself. I sat down on the couch and stared out at the crisp, fluid world of Los Santos, flying by at 100 miles per hour. “How’s Zelda?” Matt asked, narrowly missing a telephone pole in a red Audi.

“Well what changed, you or the game?”

As I stared at the screen, the video game masterpiece du jour racing past, the truth finally clicked. Fourteen years ago, the kingdom of Hyrule didn’t feel real because of the programming. It was because of the glimmer it offered my imagination to dream up the details. The waves of grass trembling as the breeze exhaled across the field, the clay and ash dusting boot-tips at Death Mountain’s doorstep, and the strength and despair of the character at my fingertips. Link was the crush who never noticed me, living in a realm drowning in unrequited love. All of that texture was in my head, not because it was missing from the game, but because it was missing from my own small, stalled life.

I couldn’t return to that hyper-real, immersive Hyrule because I didn’t have to. I am no longer that almost-person needing shading within her lines. The need to project myself out onto every slate and story imaginable has, mercifully, passed. It’s okay to simply watch, to be.

“Did you get to unlock Lelda?” Matt asked, sneaking a smart-ass grin my way.