Friday Night at the Double Bill 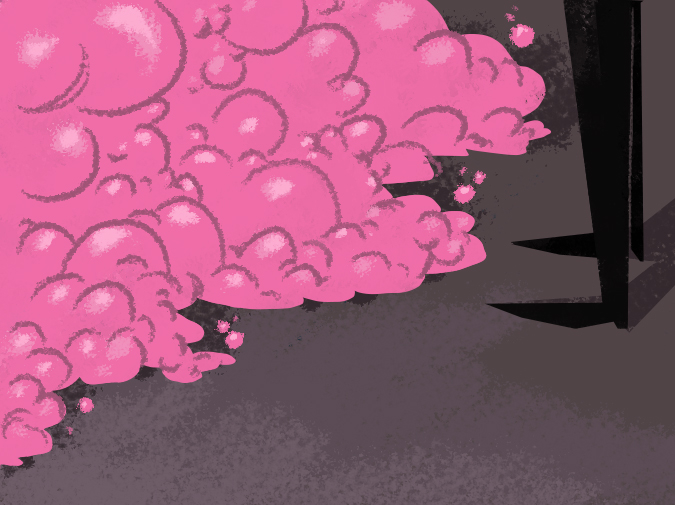 In the backseat of a parked Datsun, she waits for her turn with Billy at the drive-in. He loves to take two dates to a double feature at the same time, switching girls in between movies. She prefers to be second because the cheap beer and pot combine into an intoxicating love potion by then and his punches are more likely to miss her face if the kissing is not to his liking.

Godzilla’s stomping on the city is partly blocked by Jenny’s blonde hair and Billy’s trucker hat but she knows the mutant beast would be victorious so she doesn’t mind missing it. She takes a swig of warmish beer and looks out the side window at the concession stand. Some of her high school peers are there, laughing, eating hotdogs, shooting the shit. They are the cool kids with the white shoes and the scholarships. She is the girl with the skirt too short and the lips too red.

She pops a piece of pink bubblegum into her mouth and turns back to the movie with the silhouettes making out in the foreground. Billy stops kissing Jenny and glares. You chew like a hooker, he says.

She wraps the sticky blob around her tongue and blows a glorious pink bubble at him.

The bubble pops and she feels the slap, hard across her face.

Gum sticks to her lips and she licks it off as she stares at him but Billy is already sticking his tongue down Jenny’s throat before the welt on her face finishes forming. She slumps back onto the seat as the sound of buildings being crushed under Godzilla’s feet and innocent bystanders screaming for help come through the radio.

The first time Billy picked her up, he honked and revved his engine in the driveway. The honking woke her mother up from her alcohol induced nap and caught a glimpse of the girl leaving - a blur of reddish curly hair, glitter and sequins. The cloud of CK One released her mother from inertia and made her reach for the closest weapon - a heavy crystal ashtray - and launched it in her direction. Like a bomb, it hit the wall behind the girl. It didn’t break but shrapnel of cigarette butts and ashes coated the girl’s hair as she shut the door behind her.

Once inside the car, Billy pulled her close by the back of her hair and kissed her. The smell of cigarettes hit him and he pushed her away in disgust. No smokers in my car, he said. As she was explaining, her mother stood on the doorway, silently swaying, a cigarette hanging from her lips. Get in the back, he barked and pulled out of the driveway before she even shut the door.

She thinks of the many hours she has spent in that back seat since that day as she runs her hands down the cool vinyl upholstery. The quilted texture feels like the scales of an iguana on her fingertips and she's startled to find a small tear on the seat about the size of a dime. Without even thinking about it, she takes the gum out of her mouth between her thumb and index finger and sticks it gingerly in the hole. A vertical sliver of pink peeks from inside like a reptile’s pupil.

High pitch squeals pull her back to the movie and she watches an epic battle between Mothra and Godzilla unfold. As a dying Mothra gently lays her wing on her egg on the big screen, she notices pink goo leaking out of the air vent and onto the floor of the car. Billy and Jenny keep making out unaware of the sludge pooling onto the car floor.

Billy pulls away from Jenny for a moment. You’re next, he says.

Jenny pulls his face back to hers and soon the couple is completely immersed inside the gum cocoon before it begins to ooze under the seats to where she is. She pulls her feet to her chest as she tries to open the door but the gum has sealed it shut. Panicking, she rolls down the window and throws herself out of the car, her hip hitting the hard ground with a thud. The sludge pours out onto the dirt by her feet and then it stops and solidifies like cement.

The muted sounds of Godzilla’s screams emanate from inside the cars all around her. Rubbing her hip, she looks up at the screen as Mothra’s larvae shoot silk strings onto the monster, enveloping it in a silky net and pushing it into the sea.

The crunching of footsteps overpower the faint cheers of the masses celebrating Godzilla’s demise. Through a corridor between the cars, a man in a cowboy hat and tight jeans walks towards her, backlit by the screen so she can’t see his face. As he gets closer, she struggles to stand up and fix her skirt.

The man stops and stares at the car, now a tomb. He turns to face her and smiles, showing her a black hole without teeth. He reaches for her hair and shows it to her.

You got gunk in your hair, he says, pulling her hair a little too hard before he lets go. He starts walking away only to stop and point somewhere on the other side of the field. My truck is over there if you want a ride.

All around her, car doors open and people pour out of their cars and make their way to the concession stand. As the credits roll on the big screen, she walks until the footprints stop.

Born and raised along the El Paso/Juarez border, Gabriela Knutson brings a multicultural sensibility to her writing and finds humor and beauty in somewhat dark spaces. Her work has appeared on Aquifer: The Florida Review Online and her short story collection “Legumes” is available on her website. Gabriela currently resides in Los Angeles.  Find her online at www.gabrielaknutson.com and on Twitter @augustine74.