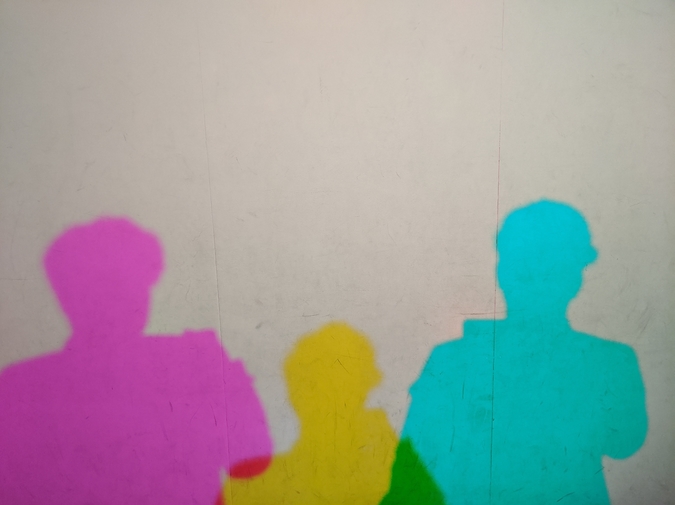 You haven’t returned my calls in a year, and I wonder if this might nudge you a bit. Dad is worried, you know. Even though I’m the one that visits him, brings him food and flowers, he only asks about you. I have a right to hate you for this, to have to deal with Dad’s sunken lost face while you’re doing whatever the fuck you’re doing.

Looking at these pictures now, our smiles are relics. There is no true, authentic family portrait. It would have been more accurate to hold out our hands and block the camera, but you know how much Dad adored photos. His “views,” as he called them.

Dad used to take pictures of us sleeping in the old Fox Lake house. Don’t call me crazy–I know you remember it, too. I can’t find proof, though. Mom would back me up if she was around. I heard him come in every night and always tried to keep very still. I remember click of the camera. It sounded like Mom slicing vegetables on the cutting board. A short, severe thwack!

I skinned my knee falling off that damn mini train. You put my arm around your neck and helped me limp to the General Store. It wasn’t really a store. They stocked embroidered train handkerchiefs and postcards and a rusted up first aid kit in the closet bathroom. We begged our parents to take us to Union to see the park, but the staleness was devastating. Now it looks as haunted as we felt.

The cashier panicked at the sight of blood and gave us a handkerchief free of charge. You dabbed my knee until the embroidered trains became stained a dull orange. The fabric was practically sticking to the gash, and when you lifted the handkerchief each time, it felt like a small piece of skin went with it.

For the record, I am sorry you got blood on your favorite slacks, but I’d be lying now if I said I wasn’t a little proud to leave my mark on you.

One of the dolphins’ name was Hank, and he knew how to spit water and wave. The dolphins moved to every signal of the trainer. Every whistle. You went to the bathroom multiple times during the show. You said you had too much cream soda from lunch, but I knew why you left. Something about it made you uncomfortable. Maybe it was the dolphins all lined up. Maybe it was because we never went to the beach.

Mom’s first signs of illness appeared after the show, and we had to stop at a motel so she could rest. You saw it coming. She was paler than usual. You knew her better.

This is one of two pictures. Dad took one of her face and body and one of her feet while she lounged on the couch. It’s strange to say: I cannot find the photo of her body. I’ll bet you have it, perhaps folded up in your wallet or tucked into a book on your nightstand. Will you at least give me that much, some confirmation that you hold a piece of her that I don’t?

From the plaid couch, this must have been taken at Aunt Lori’s in Lake Villa. We slept on the floor in our cousins’ room. The carpet smelled like cat piss. They had a cat named Mindy. Mini? Misty? It nibbled on my ear when we slept on the floor.

I love this old, yellowing photo of Grandma Dot in her rocking chair, smoking her afternoon cigs. If you stare at this picture long enough, Grandma becomes a ghost. You can see through her dress straight to the wall.

Grandma used an ice cream scooper to spank us when we were toddlers, but she had a weak arm. Still, we had bruises on our asses the next morning. They blossomed on our skin as the day wore on, and at night we’d take off our pajamas and panties to poke our butt cheeks, seeing which one was the biggest bruise. She spanked us every time we smacked each other. Grandma didn’t understand that’s who we are. What did she call us? Volcanoes, I think.

I have another picture of Mom, but it’s mine. Instead, I’ve pasted a random photo at the very end of this album: a brick wall with fading advertisement paint for the Mineola hotel. Dad took so many random photos. Silhouettes of people that are not us. Silhouettes of animals that aren’t ours. Strange views and so many strangers. He was prepping for a view without her.

My photo of Mom seems to reflect her smell the most. The way she smiles languidly at the camera, I can almost sense it. She mixed multiple perfumes at once. It made her own personal scent. Nobody could duplicate it, and it was different every day. Sometimes she sprayed a bit of mist from an orange or lemon rind over the perfume. Dad called it “scattered.”

One time she sprayed me too, and we smelled alike. I rubbed myself against my bed sheets so the smell would stick in a place I could come back to. I never slept so well in my life.

Lyndsie Manusos's work has appeared in PANK, SmokeLong Quarterly, CHEAP POP, and other publications. She lives in Indianapolis with her family and writes for Book Riot.