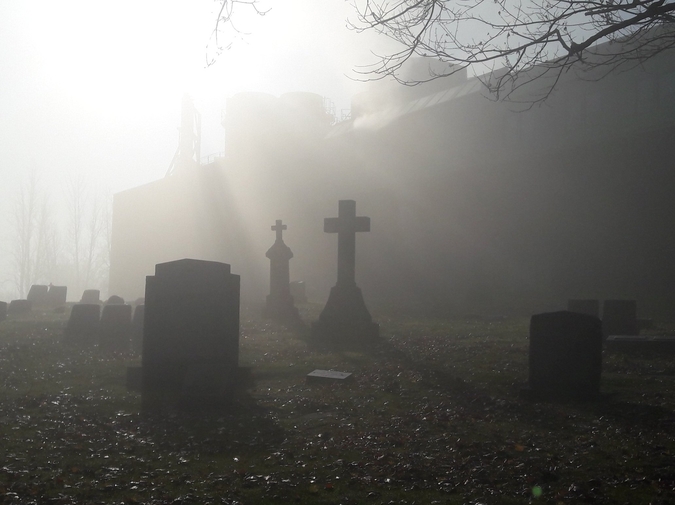 The plump pastor looks down at you and smiles. You are dead. You lay in your cream-colored casket, on a bed of scarlet silks and smile back, all satisfied like. Pastor Hugh turns toward his congregation, the entire town it seems, and raises his hands for silence.

“Dearly beloved, we are gathered here today, not to mourn the life, but celebrate the death of Thaddeus Gladwell, that bastard!”

The crowd applauds, cheering and jeering at your dead body. They are all dressed up in their finest clothes, in every imaginable color but black. It looks like an entire May Day festival crammed itself into the whitewashed wooden church.

You look down at you. Damn, you look good. Your tan skin is tight and shining. Your silver hair is brushed into neat waves like an ocean kissed by moonlight. Your pencil-thin mustache is impeccably trimmed and waiting to seduce. All of this wrapped in your favorite suit of midnight crushed velvet and patent leather penny loafers glinting with silver coins.

Pastor Hugh asks if anyone has any parting words as the entire town surges to their feet to shout out the various misdeeds you’ve committed in life.

“He made love to my momma!”

“He made love to my husband!”

“He made love to me, and never called!”

“He ate up all my food and left the bones in the fridge!”

“He stole all of my left socks!”

“He stole all of my right gloves!”

A thin man with bulging eyes and a cowardly hairline stands and mumbles, “He didn’t seem so bad to me, he did take in that stray...”

“Shut the fuck up Albert, you goddamn contrarian,” says Pastor Hugh as townspeople grapple the man back into his pew.

“That dog was the meanest creature in town, just the type Thaddeus would have!”

“Thaddeus bit me in bed once, and made me realize I liked it, which both confuses and angers me!”

“He owes me two B. Anthony dollars,” screams ole Lady Claudette as she stamps the floor with her walker.

“When I told him I loved him, he said nothin’ back,” says a woman in a blue dress and hollow voice.

Silence falls as a number of people nod in sympathy and lower their heads to hide angry tears. The cries and screams wash over you and your tight unflinching smile.

The pastor raises a hand once more and points at you. “This man,” he says, “was Sin in suede shoes.” He sniffs and adds, “May he rot in hell, if the devil will have him.”

People begin to filter out, high on righteous fury and communal commiseration. You see two figures standing, waiting as people walk by. One looks like a hippie in white, the other looks like an accountant in red. They are looking at you. Not your corpse, you.

It is then that Claudette rushes up to the casket in her walker, and begins to grope at your pockets, even looking at your penny loafers, mumbling, “Where are my B. Anthony dollars you dead dodo!”

Pastor Hugh gently pulls her away, saying, “Come now Claudette, leave the scavenging for the buzzards,” and leads her out. They walk directly through the hippie and accountant.

“You know,” says the accountant, “Hugh is right, I don’t want you in Hell.” He smiles with far too many teeth. “I know you thought it was funny to repent for your sins right at the end, but I’m happy to be free of you.”

The hippie sighs and looks skyward. “Just because someone says the words, doesn’t mean they are forgiven, that’s like, not our vibe.” The Hippie looks at you and frowns. “You can’t come up with me.”

The accountant yips like a hyena and does a little jig. “Looks like you’re left with the maggots then, have fun!”

The two walk away.

You think that perhaps Charon will come to ferry you down to Hades, but as you look towards your penny loafers, you realize Claudette actually took back her silver dollars you had tucked away. Fare to the underworld had probably gone up since ancient times anyways.

You wonder about Anubis, and if you might have your soul weighed. A voice crawls into the back of your head to say that your bastard of a dog wouldn’t vouch for you. That mutt really was an asshole; maybe not all dogs should go to heaven.

Still, you’re smiling. It is hollow, and just like a Jack-o-Lantern, you have had your insides scooped out and face cut up in a way that forces you to look happy about it. Yes, the body smiles, but you do not.

Day fades to night, as you feel the tether of your corpse pull your soul back inwards. It is raining the next day. No one bothers to get wet just to yell or look at your corpse a second time. The gravedigger buries you in silence. You do not know how long you’ve been in the ground. It could have been minutes or decades. Eventually, the lid of your casket caves in. They gave you a defective coffin, you think. You can feel the worms writhing over you, but your body does not decay. It seems as though not even Mother Nature or her maggots want you. You have destroyed every relationship in life, burning even the bridges that lead to an afterlife. There is no place for one such as you. There is no rest.

You begin to dig.

Dwin Phillips is a writer living in the swamplands of Orlando, where he studies at the University of Central Florida. He lives on black coffee, and possums are his spirit animal. You can find previous work of his in Warning Lines Literary. He is @dwinphillips on Twitter.