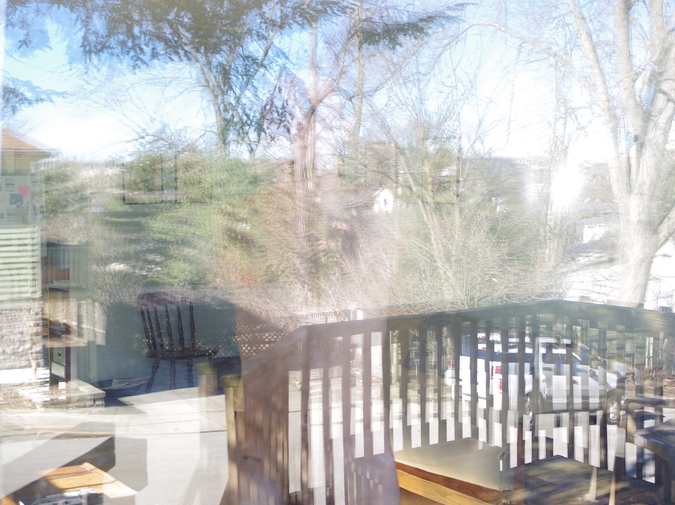 [1] Titles of this essay’s previous drafts included “On Déjà Vu and Getting What You Asked For,” “He Said I Wasn’t Queer,” and “Still, Apparently.”

[2] Another example: It was difficult for us both to squeeze onto his twin bed, and he refused to upgrade. No matter his being a 23-year-old over six feet tall. No matter my offering to buy him a queen. No matter I couldn’t have comfortably borne that expense but would’ve anyway.

[3] The essay in question, “Photo Essay,” was one of the first published by Punctuate, a new nonfiction journal based at Columbia College Chicago. As a fellow occasional memoirist I’m hesitant to say he lied in the essay—how fallible, our memories, and how strong the urge to embellish—but it includes a number of other inaccuracies. For example: The man with hearts tattooed over his nipples did not pose for the Men in My House series, but much later, when I began experimenting with long exposure portraits. The man I photographed blowing bubbles at the kitchen sink was fully clothed. While a few of the men who posed for me did get erections during shooting, none maintained them for the entire session, and none were photographed for Men in My House. None of the models entered my bedroom.

[4] My apologies for the rhetorical question. Indeed, his author photograph is mine.

[5] I would also like to note that I seemed to experience déjà vu less frequently when we were dating, often repeating stories I told him with neither memory nor feeling of having done so before.

[6] I can’t take credit for this turn of phrase. A friend taught me to describe shirtless joggers as such long before my ex-boyfriend moved to town.

[7] This wasn’t actually a mantra, of course, but I told myself I’d soon leave Indiana so often I could feel myself telling myself before I’d begun.

[8] Ours is a story people used to say was cute: We met at the start of my third year in Bloomington, when I was waiting for my friends at the wrong bar. There are two that share a building, and my cohort was at one while I sat lonely at the other. I was growing angry, about to leave for home, when a group of PhD students I recognized walked in, fresh-faced ex-boyfriend in tow. We were introduced, and immediately I wanted to share everything with him, to hold hands and hike through the forest and wake up to make pancakes. We talked for over two hours, danced, stuffed our hands in each others’ pockets, ignored the rest of the room, traded numbers. When I got home I deleted every dating profile I’d ever set up. I felt like I’d burned two years waiting, but I was in love.

[9] This is not how line breaks should be used.

[10] Other essayists I was reading at the time include Hilton Als, John Berger, Susan Bordo, Roxane Gay, Wayne Koestenbaum, and Susan Sontag.

[11] The exhibit, which included thirty of Mapplethorpe’s silver gelatin prints housed by the Kinsey Institute, was on display at Indiana University’s Grunwald Gallery from October 10 to November 22, 2014.

[12] My show ran for two months at Royale Hair Parlor, which doubled as a gallery for local artists and happened to be my place of employment. They had me answering phones, managing their social media, and occasionally giving a lousy shampoo. I didn’t mind the job because it left me time to write, take photographs, and see my then-boyfriend. I sold a few prints, too, including Kade’s torso to an older law professor, and Austin’s backside to a stylist who planned to hang it in her bathroom.

[13] The publisher, Queer Young Cowboys, is a small press based in St. Louis.

[14] The exact quote from his essay: “There are days you want to do nothing but rub his belly as if he were a dog.”

[15] The book in question was Richard Siken’s Crush, which I couldn’t believe he hadn’t read already.

[16] I adapted this language from Frank Browning’s book The Culture of Desire. The exact quote: “No longer salivating in solitary locker-room guilt over the halfback’s perfect and apparently untouchable buns, the remade sissy-faggot found out how to make his own buns, pecs, lats, and abs. The very body whose forbidden desires and responses had for so many years been the source of shame itself provided the raw material of psychic transformation.”

[18] To be clear: I did not, and I do not believe sex with your partner often being unsatisfying is reason enough to sleep with other people.

[19] This was in April, just a few days before his essay was published.

[20] I’m not sure I believe them—because objectivity is impossible in this type of situation—but our mutual friends tell me I’m cuter. No matter it doesn’t matter.

[23] I do regret, however, drafting break-up poems before actually breaking up with him. No matter my thinking at the time they might actually save us.

[24] The sonnet is titled “The Easiest Thing in the World,” and while it has yet to be accepted for publication, I remain hopeful.

Doug Paul Case lives in Bloomington, where he recently earned his MFA from Indiana University. He is the poetry editor of Word Riot and the author of the chapbooks Something to Hide My Face In (Seven Kitchens, 2015) and College Town (Porkbelly Press, 2015).