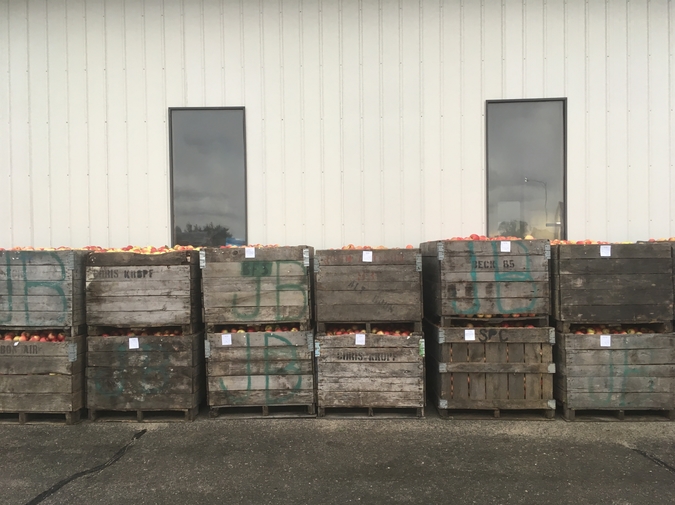 It’s the square of 100, the exact age she died. Not square, more like a pear, a pair, paring sentences down to “golly gee” or “don’t ya know.” She lived in the Land of 10,000 Lakes, never set a digit in a single one. Until her last decade, too frugal to travel, her ten children brought tales of the world-at-large. Her friends called her Cleo not Cleopatra, they shared the same hook nose, nostrils flared.

During the course of her life Cleo screwed every single President. Her favorite lover was John F. Kennedy, she adored his idiosyncrasies, his stooped, loopy gate. Every time they go-cart raced, she beat the living crap out of him. He’d suck on her toes until they’d wrinkle. Upon leaving, he’d place a dollar bill in her bathrobe. She kept them in an aluminum piggy bank in her basement.

The schemers came and went during her lifetime. Big money developers who lost fortunes in get-rich-quick vapors. Entire household savings could go like the collapse of a skyscraper, or a plunging meteor. She was a positioner, loved to gain from another’s loss. Had a knack for sucker lists, loved the bait-and-switch, zig-zag scams, the apex of a prism. Cleo died in her sleep at the Luxor Hotel, lights beaming at the top.


Gauze, A Medical Dressing, A Scrim

When they converted the basement into his room, Billy was too young to know any differently. He just wanted his own space, didn’t want to share it with his five older siblings anymore. Then when he was around ten, he stopped eating dinner with the rest of the family. His mother placed his dinner plate on the top stair every night. In exchange he only communicated by notes he’d send or receive by pulley-pails through the laundry drop.

One time when Ethyl, the family dachshund, accidentally ventured downstairs, she was never seen again. Same for one sister, Darla, who thought she’d left a sweater atop the laundry machine. Disappeared. Eventually Billy was indistinguishable from any basement dweller, resembling the spider realm. Webs. Gossamer silver. Detecting vibrations, lurking toward eventual prey.

The family nearly forgot he existed.

Then one day while folding laundry, his mother noticed a note and she decided to read it aloud to the rest of the children at dinner that night: Here is your stormy day, the one with pressing clouds and chilling breeze. Here is your way you fall in step, synchronize laughs and moderate beliefs, acclimatize moods and medications. Here, then your last vestige of blue sky and fortitude. A mélange of mercurial designations. Bastion of sailboats emptying out horizons.

They all craned their necks toward the basement.

When my ex Fed-Exed me a small box of her pubic hairs it ranked right up there among the strangest things I’d ever received in the mail. But the oddest was my grandfather’s femur. I was away at college when he passed. Shoved in front of a train by his third wife while visiting Berlin. My mother’s theory.

Then Dad decided to send along the package. When I opened it, I wasn’t quite certain if it was a joke. No note, no return address. Just the bone, suspended and fused inside a rectangular plastic frame, like a tarantula my kid sister had. I placed it on my dorm room closet shelf.

Through the years, and multiple moves later, I’d grown attached. It was as if we shared bone. Cartilage. Nerves. Connective tissues. It was what prompted me to pursue forensics, and I’d tote it, not an easy task, to my yoga classes, or to weekly seminars in Vegas. Cradle it at night, the smooth surface reassuring, hum ourselves to sleep.

After I got married, my wife begged me to get rid of it, wouldn’t listen when I pleaded with her to let it stay. She said it was too creepy. Really? What she doesn’t know is that I snuck it under the mattress, above the box spring on my side of our bed. And I can feel it, every time I lie down, growing.

Six Glimpses of the Uncouth

His raincoat was splattered with light spots of splayed dirt. The books behind him in the broken shop window were scattered and scarce. It was much later I recalled both his hands stayed in his pockets the entire time we made out. He was groping me through the jacket. Hands like clubs. It was diverse and hazy, like the winter was shedding.

Back at his place, he made me watch these home movies of some unknown person’s life. At first I kept wondering why, who is this, what are we doing? But then I felt privileged, like it was something exotic. A peacock. Then that made me excited. The wilderness stretched out forever; just you and me. And a prescription to keep the hounds at bay.

That week he asked me to meet him on the corner of 12th and Lafayette. On the steps of the huge statue of Gilgamesh. He brought Jean Genet’s play, “The Maids,” and when we read it aloud, he used more than ten different voices. I was amazed, like the first time you realize the tooth fairy is just another lie. Or that big girls don’t cry.

We all ran around the back yard playing a home-made game, crazy valentine. And you acted like nothing left. We all ran all around. Susie had hers off completely, Danny poured beer all over us, Fern screamed so loud she spit. The back yard, running around. “Crazy Valentine.” And you lit my hair on fire. Poof, that acrid smell. It was really fun.

After you left for another war, I went looking for him or for traces of him, like a correspondent, like a common genie looking for its self. I wore a uniform of the northern people so I would blend in with Susie, April and Fern. You went AWOL when I ripped my shirt off because of the spilled beer, Fern lent me her shawl. And we couldn’t find you.

Another day at work. Phone call, meet me at the garage. I did. Scary because it had been decades, another lifetime. Then you walked in, raincoat still a mess. Talking gibberish and mumbling this and that. Pacing like a panda behind bars. We went walking and cast a pall over the shed skins of the misfortunate. What did I do to make you do the things you did.

1. Derelict is what my Mom called him, and though it sounded harsh, he was homeless. Well, sort of. Slept in his car. Used the showers where I worked at Café Mocca Sauna & Tub to clean up. I can’t recall now how he moved in. But one night he came over and never left. I thought it was my roommate Roy’s bed he’d end up in, but he came into mine.

2. The lanterns were his first project. No, the first one was actually fixing our piano. He had perfect pitch. We’d sing as a quartet, Roy tenor, Derrick took bass, I’d warble soprano and he’d plunk the alto line on the piano. He seemed to know every song, like those birds that imitate others. When he decided to launch lanterns Roy and I just exchanged glances. Then Roy said, “Well, Derrick, I’ve always wanted a torchiere.”

3. “The poppies die at night,” he said. It was well past midnight. We were lying on our backs under a blue moon, mapping constellations: Cetus, Draco, Ursa Minor. I asked if any other flowers die at night. He said let’s not talk about death. But I wondered why he’d brought it up. He knew about Roy. When he rolled over on top of me, I giggled, squirmed and we started kissing. The world spun, felt like Orion split me wide open.

4. Love is beautiful. Okay, the physical grind, that savory stupor. But some of love was hideous, like Roy’s slouched decline. Trying to keep our hope alive against incomparable odds. He’d say, “call me Hester Prynne.” People stared when he came into Café Mocca, his face turned scarlet by Karposi. Or AZT. Roy was fierce. Maybe it’s why I clung to Derrick. He seemed so full of life, so vital to me. Boy was I wrong.

5. It was a paradigm of domination. Roy was everything before Derrick moved in. I was devoted to Roy, would stay until the premature end. His family had ex-communicated him. And yet, love arrived in another form. Life-affirming, desirous, and melodic. Derrick required so little, was gone for hours working on his lanterns at the new workshop. Still, slowly he seeped into my veins, replaced my blood. And I, his moat.

6. People who scream when they sing Salman Rushdie. It was Roy’s idea. I thought it was his dementia. But he repeated it: people who scream when they sing Salman Rushdie. Two weeks ago, Derrick never came home. Just vanished one Monday, split town like he’d never been here. So not really a derelict, Mom, just a vagabond. Salman may never return to his homeland. Derrick may never discover where his homeland is, carrying it, like Rushdie, singing the unnamable. While riding my bike to Café Mocca this morning, I began singing Salman Rushdie, softly, then louder. And by the time I crossed Delaney it was a full bloody yell.

Robert Vaughan teaches workshops in hybrid writing, poetry, fiction at locations like Red Oak Writing, The Clearing, Synergia Ranch, and Mabel Dodge Luhan House. He leads roundtables in Milwaukee, WI. He was a finalist for the Gertrude Stein Award for Fiction (2013, 2014). He was the head judge for the Bath International Flash Fiction Awards, 2016. His flash fiction, ‘A Box’ was selected for Best Small Fictions 2016 (Queen’s Ferry Press).  He is the Editor-in-Chief at Bending Genres, where they offer online online weekend workshops, and two week long retreats per year.