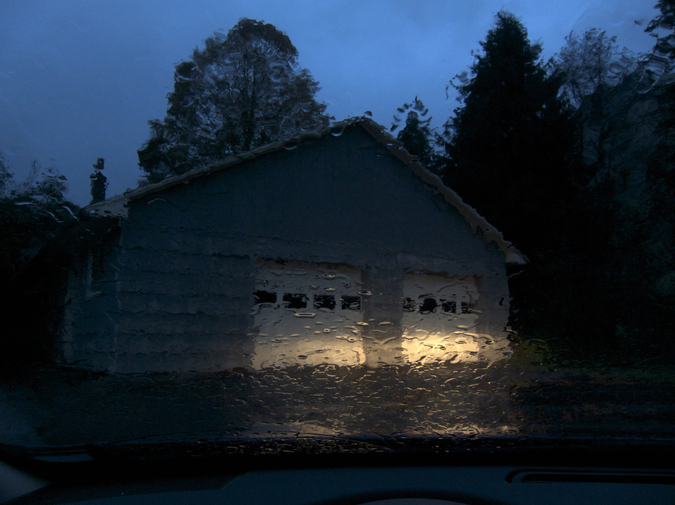 I was pregnant when we found them, nesting in our car.
I was round-cheeked and pale,
You were intense with coming fatherhood.
I said you looked like an assassin and you laughed.

The first day, we squatted in the garage, side-by-side,
Looking the car in the eye.
We laid a line of donut crumbs neatly out the door,
Then actually backed up to watch.

We waited quietly for a long time.
We waited until I was sitting instead of crouching,
And you were stretched out on the garage floor,
Eating the donuts we had left.

How many generations had been raised here already,
Not to be displaced?
Miniature centuries had raced past us
As we labored to sow our single seed.

You tucked me under a quilt
And went to war,
Spying on tiny lives, gathering evidence against them,
And came home alive with battle.

You strategized nightly.
Poisoned fruit, you thought.
Cigarettes in upholstery holes.
I’ve been thinking, you’d say, and wander back across the yard.

Later, you took to sleeping in the garage,
Which is where I went to tell you.
You saw me from the corner,
Amid poison and rotten fruit.

You smiled before you saw the blood.
Pointed your baseball bat
At an invisible rustling,
And put your finger to your lips.

Then you saw, and I saw
The car destroyed.
Windows broken, seats shredded,
Metal lacerated and raw.

You launched your bat into a headlight.
So when you laid the bat down,
Gently, like a father,
You were bleeding too.

I slid into the passenger seat,
And watched you through the glass.
Blood had replaced madness
On your face.

You opened the door in your usual way,
Sat in your usual seat. My hand fumbled,
Then found, then nested, finally, into yours,
And the seat beneath us fluttered.

They came, and we saw them for the first time:
The city we had been hosting.
The endless masses of them;
Their tiny, impossible perfection.

Molia Dumbleton's work has appeared or is forthcoming in The Kenyon Review Online, New England Review, Witness, Monkeybicycle, Bartleby Snopes, and The Seattle Review. In 2013, she was awarded First Prize in the Seán Ó Faoláin International Short Story Competition. The winning story, "The Way We Carried Ourselves," was featured at the Cork Short Story Festival and published in Southword Journal (Ireland). She holds an MA in Creative Writing from Northwestern University and teaches Creative Writing at DePaul University's School for New Learning.