End of Era After Era 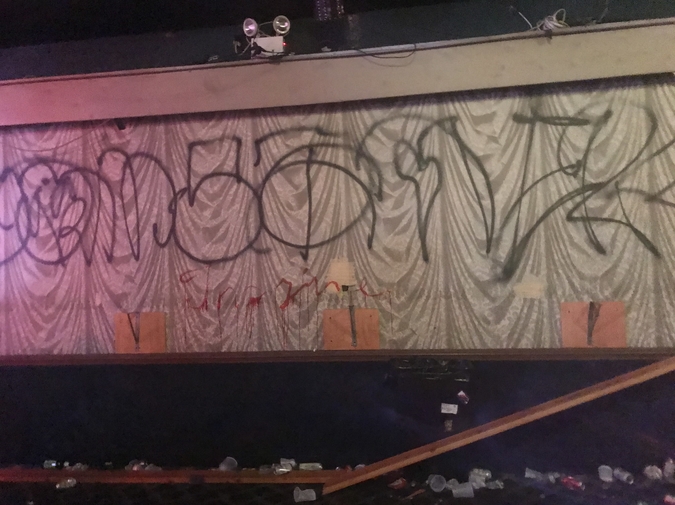 The bands tear down a shelf in the green room to smash through the drywall. Tin tiles on the ceiling clattered with each slam, and white dust poured down the wall in veins. The lid of my beer was gritty with plaster, and the room smells sweet and chemical with spraypaint. There was a crash outside as a chair broke on the dance floor. Outside the green room the crowd, drunk and melancholy, file out one by one, tearing wooden flowers out of the decorative stage lights, red sconces from the wall. Someone leaves with one of the huge, decorative marbled mirrors. Another with a length of LED lights.

This venue was many things over the course of its life; a funeral home, a banquet hall, a mini-golf course. That old, stately sensibility lingers in the marbled hall of mirrors that leads from the ground floor to the stage. They probably called it a ballroom once. The glimmering black façade with its enormous opaque windows leads to images of another time, and walking over the crushed maroon carpet conjures up visions of debutantes in princess skirts, waiting for their fathers to lead them inside. There’s something more honest about the green room. It feels like anywhere, with its brown leather seat deflated like an old balloon, a cheap wooden table with a diamond-cut glass top. Graffiti. Walking into it is like leaving the venue and entering someone’s house. Now, the outside looks like its secret inner layers. Every mirror is covered in paint, the shimmering glitter effect obscured by the arms and legs of tags.

Half of us used to work here. People duck under the counter to raid the fridge. They don’t need to look inside; old practiced movements reach in blind, pluck a bottle opener off a nail, just where it’s always been, and pass bottles to the cooks who peel off their gloves for the last time.

I follow the sound of shattering glass. Someone says they’re starting up the karaoke machine, but we only find a coke party. One guy gives us a guilty smile as he closes the door. We go into the empty basement to smoke weed. Someone tells me, again, that this place used to be a mini golf course. It bears repeating because it really doesn’t look like one; it’s the smallest room in the venue, and they never replaced the astroturf. The basement is an uneven concrete slab with a drain in the middle. I think they painted it black, but I can’t tell in the black light. Just this past Halloween there was a sold-out show in the basement, and they almost tore it apart then, too, but they’ll succeed tonight because there’s no reason to stop them.

My mother’s generation believed venues lived forever—they went to the disco in old ballroom halls, they went roller skating in pools from the 1920s. The whole world is littered in pictures of echoing chambers full of young people dancing in every era. Institutions were built on costumes, acts, and design. Art movements blossomed in unregulated old buildings, the last of the art societies stuck their tentpoles in abandoned flagships. All that remains of those places are pictures.

I stop to pee. The mirrors are broken. I can hear violence, but the combination of acoustics and alcohol makes it impossible to pinpoint where, or what material is striking what. I know there’s an employee stairwell that leads from the kitchen to the ballroom, somewhere. They might be tearing that apart.

I find my friends in the empty convention hall. The darkness there is total and comforting, the destruction muted between these paneled walls. There is no childish fear of what else might be in this room, because it’s only us and smoke, the ember lighting just the nose and lips of smokers. I hear and smell more paint, but I can’t see further than what the tip of a cigarette can illuminate. Painting in the dark on a wall that won’t exist in a week is like trying to puncture the fabric of the dark with the tip of a joint and leave a permanent spark hanging in the air.

O F Cieri is a novelist and amateur historian in New York City. Her first novel, Lord of Thundertown, was published by Nine Star Press in 2019. She likes art, insects and antiques