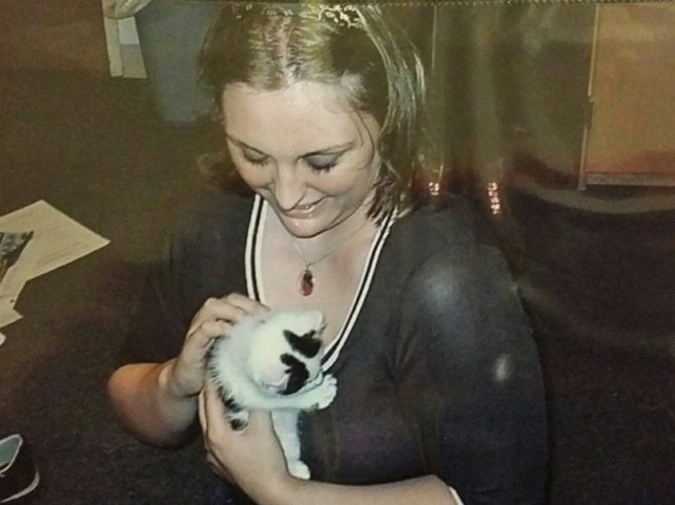 We were halfway through our second-date dinner when I realized that my shirt was on backwards.

I watched him chew, staring down at the plate, picking the least charred sweet potato fries from his Fiestaware. I could have been running out the door on fire and he would have stayed hunched, scraping the final remnants of ketchup with limp, cold sticks.

The girl I was, sitting at that table, had a freshly minted heart, the kind that skips over apathy. I thought, He likes me even though I leave the house with my clothes on wrong. I waited for him to finish his man meal, my waif-impersonation salad cleared off long ago.

The date was at The Dahlia Café, a half-hearted restaurant on Killingsworth Street in Northeast Portland. Today you’ll find a James Beard award-winning chef on that block, along with the best trout I’ve ever eaten and barbecue so succulent a Food Network crew hauled across the country to film its dripping briskets and pulled pork. But this was ten years ago, before fashion fell in love with this neighborhood. The Killingsworth that I visited with Tom was only an understocked thrift shop, an animal rights action office, a barred-window liquor store and a bus serving tacos.

Tom’s face has vanished from me. He is a phantom I conjure only in snips of his team sweatshirt—was it the Oregon Ducks? Or the Beavers? I remember standing in the Dahlia Café bathroom touching up my lipstick. It was here, leaning into the mirror and repainting my pout, that I noticed the roughness of my shirt’s stitching. It was a brown, stretchy knit top with pink piping I’d bought on sale at Meier and Frank, a piece that didn’t fit right. Too short in the torso, too narrow in the chest.

At 19 years old, I didn’t know myself well enough to dress right. I forced my body into what I thought should work, not what actually did. I flunked fashion worse than I bungled geometry. I spent my middle and high school years, when other girls hoarded ephemeral Forever 21 separates, wearing a small rotation of t-shirts, all big enough to double as shelter in case I was plunged into a survivalist challenge. My curves were sudden and severe, and I couldn’t decide what to do with them except hide.

I’d found the brown top on a rack with “coordinating separates,” polyester cousins that you were supposed to mix and match like those Garanimals clothes for infants and toddlers. I thought this was haute couture, a pass into life as a tailored, put-together woman of Style. A woman who commanded a room and stole hearts.

So I bought the brown pencil skirt with a pink hem that didn’t last a wash and the brown slacks I can’t remember wearing a single time before they disappeared, and the brown stretchy knit top with pink piping. I even let the sales girl half-heartedly talk me into an opalescent pink medallion on a silver cord that I recently threw out; after a decade, the tarnish turned a sickly shade of unpronounceable industrial gunk. “It’s on clearance,” she’d said in a voice like a communion wafer.

I didn’t try the coordinates on, or hold them up in the mirror, or flip them front and back before they were bagged and shoved back at me. They were good enough, I was sure.

Sometimes I fantasize about sneaking into the NSA’s not-so-secret bunker, the one they’re building in Utah. Maybe they could issue library passes to people like me, people with questions about themselves, the answers lost in a decade of laptop crashes and phone carrier switches and closed email accounts with usernames like princessjasmine1999 or mrslancebass4evz.

I’d dredge up my Match.com profile from 2004, with a close-up of my face blurred and burned by a sepia filter. I’m biting down on my lower lip and my eyes drift above the camera lens and my eyeliner is thicker over my right lid. Buried in my account I’d find the winks and exchanges from Tom. Did we have anything in common?

I still have that profile picture. No matter how many times I swap hard drives, there it is, User > Documents > Pictures. One shot from fifty tries of a girl making Betty Page faces in her dorm room, begging the internet to fuck her, a blonde wood closet background full of cheap lace boyshort panties and Effortlessly Elegant separates.

Tom clicked wink, and I clicked back. He was available, and so was I. Even with the nation’s greatest covert library, that’s all I’d find. That’s all there ever was.

Three weeks after The Dahlia Café dinner, the only night I stayed over with Tom, I realized I was in a stranger’s bedroom. No one else knew where I was, except maybe my dorm hall friend who could tell homicide investigators that I “was out with that one guy who did software stuff.” I was in a foreign house on the other side of town, belonging to a man whose last name I couldn’t guess with a million dollars offered for the right answer. The house, he mentioned, was purchased with his ex-fiancée. What was her name? When did they break up, and why? I hadn’t asked, or cared. If it was recent, he might be hurt. If he was hurt, he might not want me. These facts couldn’t get in my way if I didn’t know them.

I stared out the window at the yard, the boulders and moss against a hill blue and effervescent in the high moon. We were wearing our uniforms—his One of the Oregon Teams gray sweatshirt, me in my pink-brown number. “See? I swear I can dress myself,” I said, and he looked at me as though he was at a four-way stop and couldn’t decide if it was his turn to go. What had become my favorite new dating mishap party story, the anecdote I imagined telling together at a couple’s dinner party in our future city loft, hadn’t fired a single synapse in his mind. It was a stupid story anyway, I told myself.

He’d made chicken cutlets with a white wine sauce for dinner. We had sex on his brand-new sectional couch while The Daily Show replayed on Tivo. I faced Jon Stewart the whole time.

The sprawling, 500-thread-count count mattress felt like a sea, and I feared that I’d never emerge from the darkness. The night would not end, walled in by cliffs and rocks and the downhill twist of neighborhood streets I couldn’t navigate myself out of.

He smacked his lips and tossed his body to his right, away from me and the window, to the blank wall and the door. “Just close your eyes.”

I didn’t point out that I had already attempted this method, because Tom was older and wiser and owned a big two-story house in the forests behind the Terwilliger Curves and knew how to make chicken cutlets in white wine sauce and could afford new sectional couches. In the morning he will say we can’t have breakfast together because he has to get to his spin class, and it will be a month before I see him again for the last time, when he brings me a bottle of top-shelf vodka for my birthday and is sorry for not calling me because he has been super busy or whatever, and then I say the wrong thing and he will snap and storm out of the room saying he would never, ever want me as a girlfriend.

He didn’t know he was the first man I’d slept with, or how afraid I became in the not-quite-morning. He didn’t know I wore Effortlessly Elegant separates over scallop lace bras and crotchless lace underwear not out of whimsy, but because I wanted to be everything. I wanted to be someone’s canvas. Anyone’s. As long as he was breathing, maybe he could love me.

I closed my eyes.