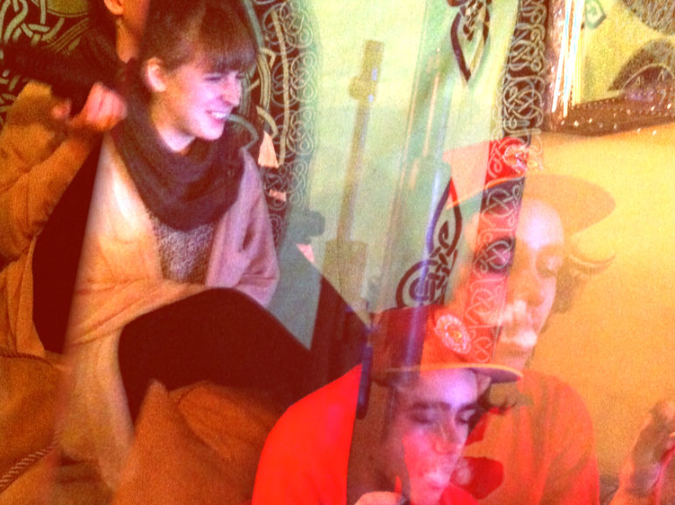 1. He liked to clip his toenails at night before bed. Routine, the first week of every month—click, click, click. I’d listen from our bed, staring at the orange hall light simpering through the crack of our bedroom door. I hated letting him into bed after that, at least not until his work boots had a chance to file them soft the next morning. I’d yell at him to put some socks on so I wouldn’t have to feel the jagged snag of freshly cut nails against my bare calves. He’d lay beside me, hanging onto the edge of the mattress, slowly inching closer as the night wore on like I wasn’t awake, like I wouldn’t notice.

2. Everything was always sliding off the hinges. The car door, the bathroom door, the cabinets above my head on the part of the kitchen counter where I did my drawings. He always said he’d get to it next weekend, after watching the game, always said that with a dark beer bottle in his hand dripping condensation onto the scuffed wood floor. We both knew he’d never get around to it, he’d never even try. One time, during a quake, the cabinet door popped off and dropped onto my bent neck, slicing delicately to the bone. Despite all the blood, it didn’t hurt too much, but I have a scar on the bend of my neck that I can’t see but can feel when I run my fingers over it in the shower. He used to tell me it was pretty and kiss it. I used to cover it with turtlenecks and tell him to fix the fucking hinge.

3. He didn’t grow up in my hometown, he was the only person I knew that couldn’t trace his family back through mothers and mothers, through amber-colored, scallop-edged photographs of toothless grins and dusty clothes. He was a military brat, one of those kids that showed up in the middle of the school year and couldn’t tell us where he came from or what he was doing there—he only had dog tags and a birth certificate and a chest full of resentment. I used to sit with my girl friends in the cafeteria and watch him, watch how he’d look up, startled, in the middle of the electric lights and bubbling voices like he’d been dropped there by a spaceship, and didn’t know where he was or how to get out.

4. He used to pick me up after work and drive like a maniac. I’d get into his truck, rusted and blue, and throw my apron into the backseat, screaming until my throat caught about how much I hated that goddamn place, this place, every place. He wouldn’t say anything when I was that mad, a little smirk creeping up his doughy, sunburnt chin like I was just so cute. It was late, and he’d roll out of the parking lot and speed down the hill, sliding through winding backstreets with no streetlights, careening all over the road like he thought us coming face-to-face with death would make me feel better about working at Walmart. He didn’t even put the headlights on when I started crying, he’d just open my window and tell me to feel the breeze, taste the freedom I’d been craving all night stuck stocking dog food. My hair whipped hard against my face, into my eyes, against my bare arms like angry little fire ants, stinging me all over.

5. He only told me he loved me once. It was at the end of a Halloween party during our senior year as the world tipped itself into November and we all tried to not fall with the weight of the turning. I was dressed as a mouse, and he was dressed as a skeleton but by then the drinking and the dancing had smeared it, so he looked melted and wet. I think you’re a girl I could love, he said. I thought I was a girl he could love.

6. He left the same way he came—quiet and with little interest. He used to leave movies, and restaurants, and weddings halfway through without warning like if something didn’t shock and dazzle him, he didn’t bother seeing it to an end. He never included me in the leaving, I’d just look away and then he’d be gone and I’d have to pay the bill or apologize to his cousin. The morning he left, he stood behind me at the door frame and watched me mount my oil paintings to the bedroom walls—blossoms and meadows and birds and buzzing cicadas turned glossy and silent and still. Maybe seeing it all there, immobilized and embalmed, scared him. Maybe he worried I’d paint him too.

7. I hated his music, the kind he played loud on our old ‘90s stereo, real early in the morning when he’d just come home from his overnight shift. He never came home tired like a normal person, he came home on fire, his eyes hot and blood shot, dry and crackling at the lashes like he could see the future, like he wanted to grab it. He always wanted me to get up and dance, right then with him still dirty and me half-asleep. Dance bitch dance, he’d yell when I shot up out of a dream about the sweet, dry smell of dirt and hay, about Ma who I’d left alone way back in Kansas when I got on the flight and followed him to the coast. I’d stumble over our dirty laundry and into the living room to yell at him to shut it off and let me sleep. He’d sway in front of me, his eyes so wide, like a deer or some kind of animal, his fingers grasping the dial to turn it up a little bit louder.

Mialise Carney (@mialisec) is a writer and MFA student at California State University, Fresno. She is an editor at The Normal School and Nightingale and Sparrow, and her writing has appeared in Atlas and Alice and Menacing Hedge, among others. Read more of her work at mialisecarney.com.