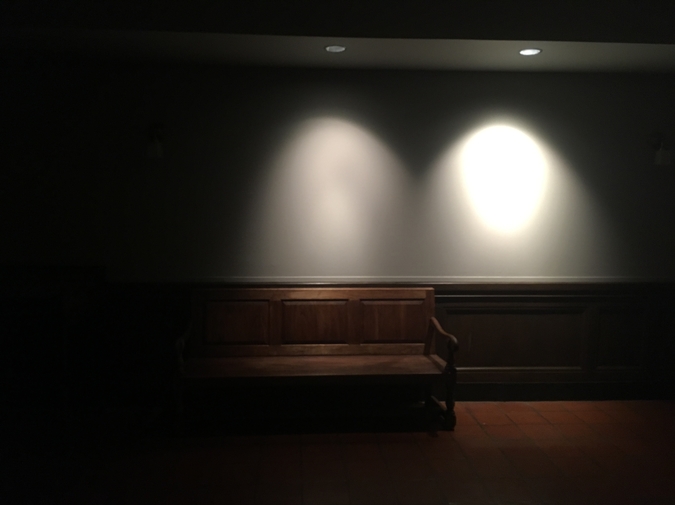 Our first stop was Red Rock Canyon, down at the bottom end of the Sierras. The rocks, as promised, were red. It was pretty. We ate our cellophane-wrapped gas station sandwiches and drank our six-pack of Bud and watched the sun go down. I made an inventory of the cooking smells that wafted over from different campfires, craving some, rejecting others. We decided it was stupid that we didn’t do this kind of thing all the time, even for a weekend or a day. A five-hour drive and then a total different world. Around ten o’clock, Caitlin crawled into the tent. I stayed out for a while, listening to the noises around us. I couldn’t tell if they came from animals or humans, but some of them seemed menacing, and I froze in place, steeling myself for a fight. I felt let down when nothing happened.

The sun woke us early and we headed to Death Valley. We kept worrying the car might overheat, so we only used the air conditioner a few minutes at a time. Those few minutes were heaven.

Caitlin put on a CD labeled “Cowboy Country Classics.” Frank had given it to her, so I wanted to be opposed, but I had to admit it made a good soundtrack for the desert highway drive.

We claimed a spot in a campground that seemed more like a parking lot, dusty and crowded with families and retirees, though I spotted three rocker guys in metal band t-shirts lounging in camp chairs on the other side of the drive. I wondered what they kissed like. Once we got our tent set up we drove to all the spots you’re supposed to see. Artist’s Palette with the colorful boulders, Badwater with no water, Devil’s Golf Course with funky crusty rocks across the ground. Then dinner at a diner with ancient menus on the wall—chicken dinners for fifteen cents, salads for a dime. The prices had gone up but the food was still old-fashioned. I had chicken-fried steak and two whiskey sours. Caitlin was acting weird during dinner and I couldn’t figure out why. Finally she said Frank liked whiskey sours and it was making her miss him. I forced my eyes not to roll. I’d planned to order another drink, but when the waitress came I asked for the check.

When we got back to the campground I thought about ditching Caitlin and going to hang out with the metalheads. But they were gone.

The next day we drove to Vegas. Caitlin knew the name of a cheap motel at the end of the Strip which only took same-day reservations. We pulled in around one and they said to come back at four. The lobby was small and smelled like salami and hand sanitizer. We went to kill some time at the Luxor and I joked about winning enough money to stay somewhere with a better smell. Then I walked up to a roulette table and threw twenty bucks on twenty. Caitlin gasped and I felt like a bad-ass, but the dealer was unimpressed. He flicked the ball into the wheel and we sent out all the vibes: twenty, twenty, twenty. It came up double zero.

An escalator walkway brought us into the Excalibur. Caitlin bought me a drink to make up for the twenty. She told me how her uncle had gotten married here a few years ago, right in the hotel. Medieval attire was encouraged. Caitlin wore one of those boob-shelf corset dresses and drunkenly made out with her cousin Steve. I started laughing and she said yeah, I guess that’s messed up. But I told her I was laughing because I had also made out with her cousin Steve, the time he came to town for Caitlin’s little sister’s graduation and then all of us went out drinking. Caitlin got an odd look on her face, but then she laughed. Well, here’s to Steve, she said. We clinked our plastic goblets.

We went back to the motel, got our room, took turns showering, fell into a dazed nap. Woke up at 7:30 and headed out. We went to Treasure Island and ate at their buffet. We saw the white tigers at the Mirage, the painted sky at Paris, the canals at the Venetian. Then Circus Circus, garish and terrifying, all candy stripes and clowns. We drank vodka tonics and played video poker like robots. The guy on the barstool next to me kept brushing his hand against my leg.

Caitlin said she wanted to go home. I thought she meant the hotel and I was fine with that. But she meant leaving in the morning. We’d planned to drive to LA next, to see some friends who’d moved down there. I was bummed, but it was her car.

It was a long drive home. The only good part was eating an ice cream sandwich that I bought at a dumpy building with signs for Gas and Ammo. When we got home it was late at night. Our roommates, Kevin and Carrie, were naked and sweaty on our dining room table, asses and legs pressed right up on it. Caitlin shrieked and said she’d never eat off that table again. I knew I would still eat there. We each went to our room.

I didn’t really make out with Caitlin’s cousin. I told her I did but it was Frank, at a different party, eyes bleary, asking if I knew where Caitlin was. I pointed to the kitchen. He grabbed my hand and walked me to the back porch. His tongue was rough and thick. There was a taste to it I could never quite place.

Jenny Hayes lives in Seattle and has an MFA from the low-residency program at U.C. Riverside - Palm Desert. Her fiction has appeared in Geometry, Litro NY, Spartan, Jenny Magazine, and elsewhere.