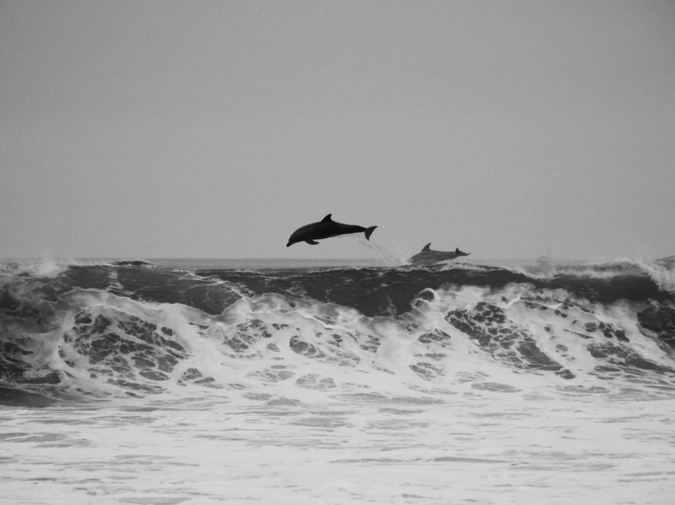 We both found ourselves giggling at the situation three beers deep, both of us watching how our fingers raced to hug the other’s. Lightning flickered around us and thunder wasn’t too far behind. Above, the husband slumbered. The storm would beat against the roof, the storm could wake him up.

On the television screen behind him, behind his beer bottle, there was a documentary about bottlenose dolphins. The closed-captioning unfurled across the screen; I caught phrases about their lifespan and it was more than I expected—an average of forty years. That was twice as long as most relationships I knew. Dolphins had well-developed hearing too, able to hear clicks and form pictures from sound. That was more than I had, even with my hearing aids. I thought again on the man sleeping upstairs and if he could figure me out by how my tongue curled around his husband’s name.

Shouldn’t I go soon? I asked when the documentary cut to commercial. I didn’t want to, but I needed to be the hero and leave him alone. Retreating to my hotel room kept this visit good.

He shook his head, You’re staying the night. It’s a goddamn ocean out there. His eyes twinkled. Contentment looked attractive on him. His eyes stuck me to the chair and I wanted to pull my hand away, fold my limbs against his gaze. Outside, lightning still reached down from the surface. It was a futile gesture.

He fingered the opening of his beer bottle, rubbing along the hole again and again. He was telling me what he wanted, and I observed from the other side. The sky cleared its throat and the windows rattled. My back straightened, pressed flat against the chair.

He laughed, You’re lucky I like you so much.

Lightning again. Past the ceiling, something thumped.

Just a branch, he explained. Or my husband. Same thing.

His legs were spread. I wanted to be alone. I didn’t want this visit to slide into indecency. I didn’t know how to tell the man of the house. The documentary was back with its blue joy and I felt loneliness crest inside me. He didn’t love either of us, but he loved not being alone.

If you’re going to insist I stay here, I told him, you should get some blankets.

There’s a guest bedroom upstairs, he replied. The bed’s made up. He’d thought of everything. I drank the last of my bottle with his eyes on me. Dolphins danced on the screen, darting out past his left cheekbone. We had been dancing for a long time, I realized. I filed that away as evidence that he could love me.

I stood up. He still slouched, open. I went to him, kissed his cheek. Everything else smeared soft, as through a rain-stained window. Did I want to look?

Goodnight, I said. At the foot of the stairs, I looked back. He was smiling at me, the televised depths casting blue over his face.