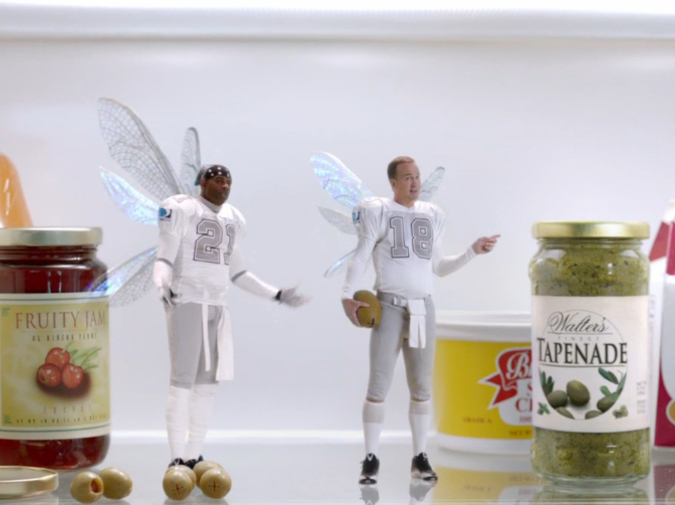 Here is what I know. They wear tights. Their wings are thin flapping things that look more like dragonflies than butterflies. They never seem to get cold, don't shiver or shake or get soggy like the half a turkey sub they've been loitering next to for almost two weeks now. They don't eat: everything in the refrigerator is exactly the same as it was twelve days ago, which was exactly the same as it was thirteen days ago.  Truth is everything is the same since Carrie left. Everything but the faeries.

All they talk about is football and the contents of the refrigerator and how I'm watching television, which the black one says is all wrong but that makes even less sense than the white one's jokes about Carrie's tapenade.

Even Carrie didn't have an opinion on how I watched television. Maybe if she comes back, they can have a roundtable, a panel discussion on my television failures and all the rest of it, too. They can invite her sister and her mother and her boss. They can talk about my emotional isolation and the Packers game, about the last time I said “I love you” and the right kind of things to be putting on a burger, about trial separations and low monthly fees.

I wonder what would happen if I actually just bought Direct fucking TV like the black one keeps harping about.

What I have tried is standing in the kitchen, smoking Parliament Lights and listening to the refrigerator. Every now and then, I take a quick peek to make sure they’re still there. I slam the door as soon as the black one starts jabbering.

No matter how many times this happens, I’m always a little surprised when they’re still in there. I put my ear up to the refrigerator. A low hum: gray machine noise and the chatter from the black one, the dull slap of a tiny football being passed back and forth. Chatter slap. Chatter slap. The white one makes a joke about the tapenade and I shout Goddamit and everything goes quiet except for the refrigerator hum.

I take a step back. I know what’s coming. "How you gonna watch the Redskins on Sunday?!?!" the black one shouts.

"Nothing like a little West Coast Offense and...tapenade," the white one deadpans.

I back into the living room, go to the window and peek through the crack in the curtains. It looks exactly the same out there, but how could that be?

In the few moments when I sleep, I can hear them talking and I’m not sure any more if it's in my head or really coming from the refrigerator. When I close my eyes, I see their little wings flapping.

I want to turn on the television but I wonder what the black one means about how I'm doing it wrong. I feel like I should be hungry but what kind of food would the white one think I should eat? I hate the way he says it -- "tapenade" -- with a sarcastic drip at the end, like what he's really saying is all those things Carrie said while she was stuffing her shit into the gym bag while her boss's Hummer whirred in the driveway.

Tapenade is pretty good. Olives and oil and capers, maybe some anchovies if that's what you're into. Carrie liked it. Likes it. What the hell is so funny about olives and capers and oil? I never hear the white one making jokes about salsa. He never says anything about hummus.

Fucking tapenade. It’s not even mine, but I guess now it is.

I sneak into the kitchen and open the refrigerator door. "Hey man!" the black one says. "How you gonna watch rookie sensation Andrew Luck taking on his former coach, Jim Harbaugh?"

The white one just stands there, wings flapping. He looks goofier than usual. He sits down on an egg carton, doesn't even notice that his right wing is pushing up against the mustard. "I'm cold," he says.

"Come on, man," the black one stage whispers. He jerks his head in my direction. "Stand up, Peyton. What you think of that tapenade anyway?" He says the word like he's floating a softball, like the white one is gonna knock it out of the park.

But he just stands there, shakes his head. Every time his wings flap, a little halo of residue comes off them. "Too long," he says. "It's..." he puts his head in his hands. "Where are we, Prime?" he says.

I reach in and hold my hand up to him like I'm approaching a strange dog.

"Hey brother," the black one says, to me, "maybe you want to come back later. Give us a sec."

I put a finger up to the white one's wings. They are soft but crisp, something running through them like veins. I stroke the wing and he sighs. My eyes well up, white noise roars in my ears. My heart pounds and I wonder how many days it’s been since she left. Fourteen? Two weeks? Can that be right? I wonder how many weeks before then since we actually sat down and talked about something more than the bills, the dishes, who was doing what to who on the Real Housewives or Survivor.

I hold out my hand and the white one stumbles into my palm. He's surprisingly heavy, solid. The wings stop flapping and go flaccid, the right one hanging down at a bad angle. He curls up into the fetal position. I move him over toward the counter, leave the door open so the other one can see. I put a trembling finger up to his wings and wonder if I can really feel the heartbeat in there or if I’m going crazy for good.