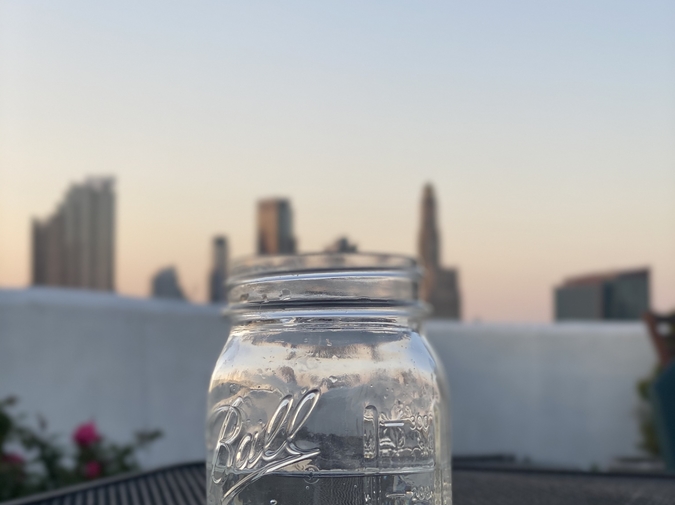 For a long time, I did not understand what people meant by detailing. When they had something "detailed," it was often a car, and so I assumed that to detail involved the addition of details, often ornamental, like rhinestone tag holders, steel rims, or tiny rosebuds painted along the edge of a window attached to an object, usually a vehicle. I had seen a few detailed wheelbarrows, so maybe I believed having wheels was the prerequisite for details but since people rarely discussed their wheelbarrows, it never came up.

After graduating from college, deciding to become a single mother, and getting knocked-up in the opposite order, a friend on tenure-track came to visit me. We drove to a meadow and watched the nodding donkey lift and lower its head as we drank Coors and my son sprinkled rocks with red dirt. The friend said she was proud of me—and how I was managing or juggling or living my life as usual. I removed an aluminum tab from my son's mouth and told my friend her eyebrows looked good. Her heart seemed full. Her calves were more muscled than ever. She must be juggling her own balls, as we all are, juggling things and talking about others.

For some reason, my friend laughed and hugged me, the lukecold metal of her beer can pressed against my back. It was like high school when everything we felt had been felt extremely by others before us, and the most we could do was drink and hug and laugh and pretend to like boys with nice calves.

This is why I love you, my friend said. This is why. And she waved her arm across the meadow, past the nodding donkey, stopping just short of my son's shoe. I remember the shoe was bold yellow, a discount, a good deal, and also unique because no other boys had yellow shoes on the playgrounds. I kept a map I'd made of playgrounds in the glovebox. Just as I went to get it, to show my friend that playgrounds were actually everywhere, hidden in plain sight like feral cats you didn't notice until finding yourself alone with one at midnight, and feeding that cat, watching it let you draw closer, watching the walls in its beady cat eyes crumble as you whispered the word milk again and again until the cat let you pet her, which is why Black Milk has been living in your apartment since then, violating building codes with her starry, milk-seeking eyes. You know what? my friend said, as I stood to get that map, you should get that thing detailed!

My fingers felt cold, the cat still close to my mind, the sun on my legs again, with the shade over my torso, and my hands in the middle of that argument between cold and warm, dark and light, absolutely undecided. I thought if I had the tools, I'd detail it myself. Hadn't I painted rainbow balloons and happy-faced lollipops on the cheeks of my son's peers at a birthday party? Hadn't I doodled on my Trapper Keeper with Sharpie during that economics class where we learned nothing about how to manage a single mom budget? Hadn't I dressed up as a coyote that time for no reason?

Maybe my friend laughed. She said there was rotten milk, probably spilled from a sippy cup, in the backseat. She said my car was very dirty and funny and very me but still, I should get it detailed. She offered me a coupon. She said the coupon was at her mom's place and she'd grab it for me this weekend. She said maybe we could visit to shoot the shit again soon, but she had papers to grade, and her tolerance for alcohol and mosquitoes had diminished with age. She held up her hand like an airplane doing a nosedive.

The next time I saw my friend was at a wedding to which she brought her dog, Jack, and she looked resplendent when introducing me to Jack, who had a green silk bow-tie around his neck. But I couldn't know that yet. I also couldn't understand why the no-kids caveat on the wedding invitation did not include Jack who was cute and precious but, like most kids, very disruptive and prone to burrowing his nose deep in surprised crotches. I could not have known or understood that then. Or yet.

After my friend left, I called my sister who admitted she got her car detailed once a year, and this meant that she paid someone at a car place, or a fancy gas station, to clean it out with a powerful vacuum and rubbing oils. To make the dashboard and doors shiny. This made sense. This was, after all, the year the black bears of Yosemite National Park were finally weaned from junk food, and rangers confirmed that even two months without junk made their fir thicker, lusher, shinier. I did, in fact, want this for my car. I wanted the best of things for me, my son, our car, and our future.

I thanked my sister for all she had done, including singing karaoke with me every Christmas and braiding my hair before we got lice, and now, finally, helping me understand what people meant by details. Yes, I would do it. I would have my car detailed. I borrowed my son's piggy bank as a repository for our first detailing.

Three months later—I remember the leaves were a terrible pinkish orange, the sky was that bright, impossible blue reserved for autumn—we had enough money for a middling detail. My son handled the word detail like a bone with three syllables. He sang de-tay-all, de-tay-all as we drove to the car place with all those leaves falling around us, and some patches of smoke from leaves burning on lawns, and maybe even birds swishing overhead, going somewhere, somewhere, anywhere else.

At the car place, two men with clipboards and white patches on their shirts discussed detail options with me as my son removed his shoes and then his socks and then began to throw them, each shoe and sock separately, towards the brown metal trash-can near the door.

Just let me take him inside to the potty, I told the two men, I'll be right back.

Inside the car store, there was a wall of rhinestone and pleather accessories next to stickers that you could put on your window, and so I stopped to look at the stickers, to run my eyes over their glitters, and my son dropped my hand. My son reached up to touch a sticker that resembled a tombstone with the words, R.I.P. Mom, From Then-Forever, and I paid for this sticker immediately, instantaneously I spent all the money for detailing on this sticker-tomb that my son touched, which then touched me, which now touches others they pause to stare and squint at our rear car window. It is a detail of sorts. It is the end of misunderstanding.

Alina Stefanescu was born in Romania and lives in Birmingham, Alabama. Her debut fiction collection, Every Mask I Tried On, won the Brighthorse Prize and was published in May 2018. More online at www.alinastefanescuwriter.com or @aliner.