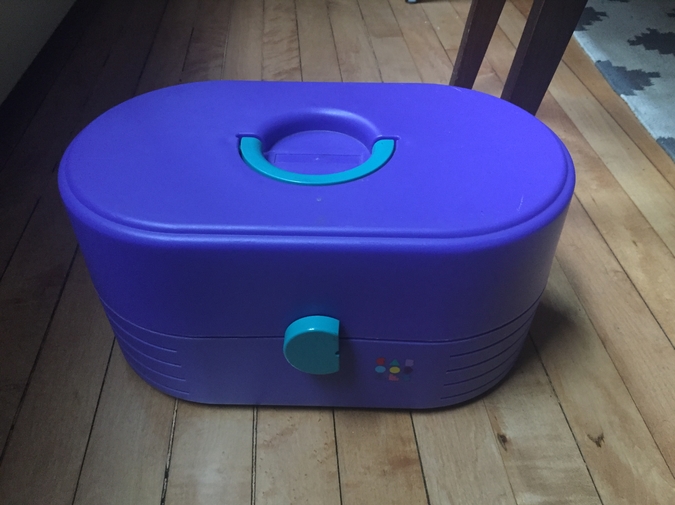 I have my tackle and tackle box. You only have to say the word.

– Matthew Dickman, “Getting It Right”

I still remember the hard plastic carrying case I toted around as a preteen in Southern Germany. Bright purple with an aqua-colored latch and handle, it often made the 45-minute car trip from our first-floor apartment on the Army base where my family was stationed to my mother’s hometown when we visited on the weekends.

Introduced by the Plano Molding Company in 1952, molded plastic boxes with compartments for storage were first sold for tackle usually of the fishing variety. But a year after a photo in People magazine showed Vanna White using one to store her makeup, a new line was created and marketed for cosmetics—Caboodles.

“Caboodle, n.” defined by the Oxford English Dictionary as: a corruption of the colloquial “kit and boodle.” A collection of things (or persons) viewed as a whole (a set, lot, collection).

When opened, my Caboodles revealed an elaborate middle section which popped up and split into two smaller sections swinging out in opposite directions. Except for a Bonne Bell Lip Smacker (probably Black Cherry), I didn’t own enough makeup to fill my case like other girls; I don’t remember my mother ever taking time to show me how to apply it. Instead, my case was packed with cassette tapes, Barbie accessories, and Crayola crayons.

It was my Oma who gave me a small black & white herringbone-patterned suitcase to keep and carry my collection of Barbie dolls and their clothes. Made of coated compressed cardboard with reinforced plastic corners, the circa 1940s German-made piece had a black handle with metal latches that needed to be slid in unison for the case to click open.

Sometimes I carried a used V.C. Andrews paperback in the bottom of my Caboodles; whichever of the gothic serials I was reading at the time.

First attracted to their front covers featuring a mysterious “stepback” portrait of the families described in the book, as I read I became obsessed with the stories too. The focus of both was on the heroine, a young woman. I’d trace the edge along the keyhole cutout with my finger then open and close the cover to study the illustration lurking inside.

“Despite her ragged clothes and dirty face…” it says on the back cover of the first of five Andrews’ novels focused on the Casteel family, “Heaven Leigh…was the prettiest, smartest girl in the backwoods…” I always told myself the “smartest” part was the most important.

When I was even younger, we lived for a short time in Radcliff, Kentucky, less than a mile outside a different Army base. Memories of going fishing with my father are sensory oriented: A khaki-colored tackle box with a blue handle. Whirling fishing line cast through the air. The way fat earthworms smelled after spending time clumped together in a Styrofoam container. Ripples made by a red and white bobber floating atop otherwise still lake water.

According to an issue of The American Journal of Nursing, when members of the Army Nurse Corps were ordered to duty overseas in 1918, additional items were issued to them by the War Department through General Order No. 134 including: six gray cotton uniforms, one gray woolen sweater, one gray woolen muffler, one raincoat, one blanket for use on transport, one sleeping bag, and one steamer trunk.

As a young adult living on my own for the first time in Memphis, my roommate and I went to a storage room sale looking for furniture. But by the time we arrived, the array of abandoned items had already been picked through at least twice. Unable to find any standard furniture, we were drawn to a once Army green steamer trunk with a broken latch said to have belonged to a nurse. Scrawled on a tag in pencil was a faded name, the name of her barracks, and a year.

“You are more than a pretty face and a pretty case,” a director of marketing and product development said during the 25th anniversary relaunch of the Caboodles line in 2011. “Beauty is built on the inside.”

The blurb on the small, squat container of Hope in a Jar™ proclaims “miracles can occur” when hope turns into faith. Made without parabens, sulfates, or phthalates, the moisturizer has been a Philosophy staple for more than 10 years. Before bed I slather the nighttime version across my skin, rubbing the cream into my cheeks and neck.

In the morning, I inspect my face in the mirror for signs the glycolic acid is retexturing my skin. Will the faint line caused by years of reading and thinking in the middle of my forehead disappear?

Now in Georgia, I use a multi-pocket tote made of polypropylene to lug teaching implements from my house to my car to my office to my classrooms and back again. Dubbed the “paw-kit raw-kit” by the manufacturer, I use the eight pockets inside and out for a water bottle, smart phone, stapler, paper clips, Uni-ball Vision pens, Expo Low-Odor markers, lesson plans, textbooks, and handouts. There’s also Blistex that tastes like minty vanilla.

In Greek mythology, Pandora was the first woman on earth created by order of Zeus. Many attributes were bestowed upon her by the goddess, including Aphrodite, who gave her beauty.

Angered by the actions of one brother, Zeus presented Pandora along with a piece of sealed pottery to the other brother to be his bride. Going against orders, she opened the pyxis and all the evil contained inside escaped and spread over the world. By the time she was able to close the lid on the container, all that remained laying at the bottom was hope.

Although she claims Memphis as home, Janet Dale lives in southeast Georgia where she teaches first year writing at Georgia Southern University and is always reading something (including submissions for Nightjar Review). Her work has appeared in Zone 3, Pine Hills Review, Really System, Atticus Review, and others.