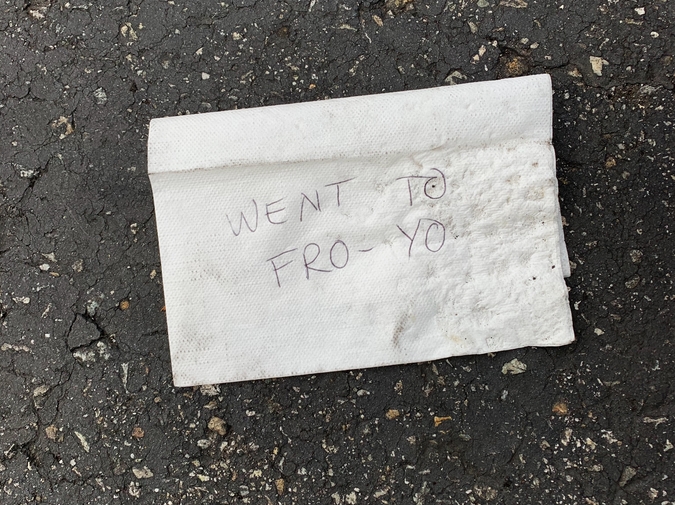 I feel like I should confess. I used to worry that I hadn’t suffered enough. I really hadn’t suffered at all. I mean, someone did kick our door in at three in the morning because of the ‘80s and Reagan and Crack Cocaine, but he didn’t hurt us. He got my mom’s purse and seven bucks. And in 1990, I got hit by a drunk driver and lost my spleen and that did hurt like hell, but it was just a spleen. It’s almost the most sufferless organ you can lose. It was my coming of age. It made me a better person. The worst things that happened to me always ended up being the best. I started to worry that I was the Anti-Job. God and the Devil had gotten together and thought it was funny to fuck with Job. See how he’d react. If they could do that, maybe they were capable of doing the other side. Maybe they could take someone and never fuck with him. See how I’d react.

My wife and I used to play a game of Hypothetical Suffering. What would you do if? How would you feel if? Could you take it if? The game might have started from wondering how we would do in the Walking Dead. What would we be capable of? But it turned micro. It turned darker. What if I got cancer? What if my brother was arrested for a major crime? What if I wanted to try heroin for my 50th birthday? We wanted to know what we would do for every possible if they threw our way.

I didn’t fear God though. There’s a lot of people in the world if you think about it. I figured God was too busy to watch all of us. That’s a lot of people taking his name in vain. That’s a lot of people masturbating. God would get dizzy keeping track of all that. I guess I believed in a dizzy god. I didn’t believe he expected us to consider being watched. I didn’t think he planned on us contemplating the meaning of life. I think we started going there and God said, oh shit. This is getting complicated. Then we started thinking about him, and he said, fuck this. I’m out of here. I’m not saying God was a deadbeat dad, necessarily, but I am saying God couldn’t take it. He got dizzy. He got the fuck out. He left his kids behind.

But the non-suffering life had to come to a halt, didn’t it? In the last week of February, my dad went into the hospital for a small infection from a kidney stone. He had them before and he had always gotten better. This time he went in on a Thursday night and by Saturday he seemed to be getting better. We talked to him about going home. We talked about his college days like they were yesterday. He told my wife not to bother reading Melville. Life was too short. That night, he appeared in my dream, and he asked me, Are you ready for this? The next morning, they rushed him downstairs to the ER. I got there in time to help with the decision to go on the ventilator. He told me to take care of my mom. I said I would, of course, but I never got to tell him that I was sorry about calling his God a deadbeat dad. I never got to tell him how long I had discounted suffering. And then we spent a week with him on the ventilator giving his body one last try, and I told my daughter how he had asked me in a dream if I was ready. I told her I thought I was. As best as I could be. Then only a week after he died, the whole world went to hell. I couldn’t escape ventilators on tv or dreams of myself or loved ones needing ventilators, and I wondered if maybe this is what he had asked me about. Was I ready for this this? Not his death, but mine. Not his, but ours. Or what if he was asking if I was ready to live? I worried if even in this shitty world I was still being given more grace than I deserved. If even in this shitty world I’d suffer less than my share. What if I’m more alive now than I’ve ever been? This makes me dizzy too, but it doesn’t make me want to get the fuck out. This makes me want to stay. I want everyone to stay.

Al Kratz lives in Indianola, Iowa with his wife and their cat, Thomas Petty. He's a fiction editor at New Flash Fiction Review and can be found at alkratz.com. The message of my father's life was love. The most important thing is love.