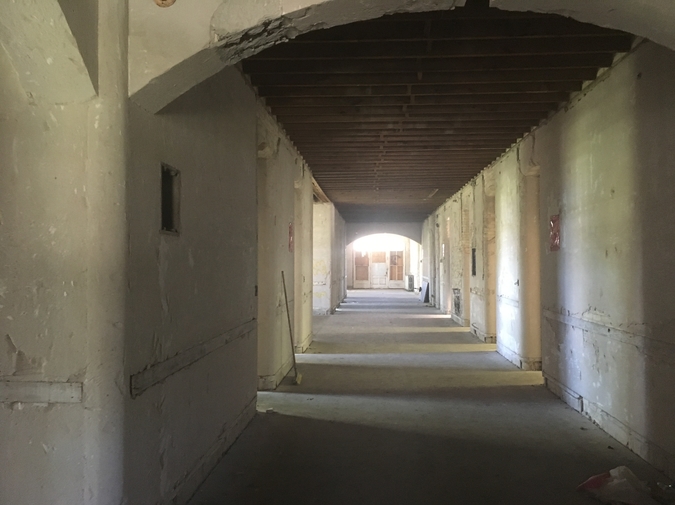 The funeral director checks his watch and asks if I’m ready.

Under normal circumstances this would be a closed casket. My father’s face is a hostile landscape of ropey scars, raw, ragged tissue and exposed cartilage. Below his left eye there’s a lesion so deep it may actually go on forever. He’s hideous, but that isn’t what killed him. He lived like this for a long time. Long enough that it would be in bad taste to hide him now.

Karen took the kids to Me Matey’s for Scallywag Strips, Yo-Ho-Ho-Hotdogs and walking the plank into the ball pit. We’ve always maintained that their grandpa died before they were born. Bringing them here would invite a host of awkward, painful questions. The first of which would be why does his face look like that, and I don’t have a good answer.

The story I got was that he was run over by a car when he was little. Back then medicine wasn’t what it is today so his parents tried to fix him themselves. His dad molded a plastic facemask and his mom sewed an elastic sleeve to hold it in place. Instead of getting better, he contracted an infection. His parents flushed his face with antiseptic twice a day. After a week, there was no improvement. They decided to let the infection run its course.

Mom said that was just another one of his lies. He never told her what happened either but she saw it get worse over the years. When they met, his wounds were faint enough that she could trick herself into thinking they might eventually go away. It wasn’t until after they got married that the changes became more aggressive. By the time I was born, he looked like he does today.

I nod to the director. He pulls back the curtain separating the viewing room and hallway. The line goes to the entrance where people are knotted up in small groups. They are solemn, speaking to each other in hushed voices, introducing themselves, shaking hands and nodding heads. They wear suits and dresses. These are the Mr.’s and Mrs.’s of my youth. Real Estate agents. Insurance agents. Salesmen. Cancer patient support group members. They are parents with grown children who have moved away, here to fill the water balloon shaped hole carved out of their hearts by the fear of being forgotten.

Each steps forward and tells me how they knew my father. What they thought of him. How hard this must be. How he was taken too soon. They tell me he was strong and that I will be in their thoughts. They do not ask about my sister or where we have been all these years. They say how nice the funeral home is. They are thankful he is at peace now. Some even say he looks good.

Their words would fit in a single suitcase.

I want to ask them why I have memories of him with a normal face even though it was grotesque before I was born. Instead, I thank them for coming. I shake hands. I hug. I am solemn.

After an hour the line still goes to the door.

The funeral director drifts over and whispers not to worry about the time. They’ll stay open until everyone’s had a chance to say goodbye. He says this is good for business. Word of mouth is the only kind of advertising that works in this industry.

Next in line are three teenagers, two boys and a girl. They have foregone suits and dresses for black t-shirts, steel-toed boots, fishnets, and thrift store blazers with patches sewn to the lapels. They are variations of me when I was that age; nightmares with no fashion sense and too much conviction. They think who they are makes a statement about the world and they think it will matter.

I feed them lies. Acid. Curse. Gunshot. Golfing accident. Fish. He fell off a boat and fish ate his face. Then one of them laid eggs in his sinuses. A few weeks later hundreds of tiny fish babies flip-flopped out of his nose and mouth. He could still feel a few in there and he clawed at his face to get them out. They died before he could reach them. They’re still in there. Two or three little fish skeletons. When he shook his head, the bones would rattle and only he could hear it.

They are unfazed so I tell them the truths that I do know. I tell them what its like to endlessly compare yourself to someone you never knew. How it feels like success and failure at the same time. And somehow that feeling is connected to why I never even really try to exceed mediocrity. My goal is to safely disappointment in the slowest way possible. I tell them how hard it is to keep going every day and not think about if I can be a good dad without having had one. I tell them he doesn’t look like this in all of my memories. I am slowly replacing him with myself. Part of my brain thinks I can make my childhood better by being a good dad now. I know that doesn’t make sense. The game is over but my memory is still keeping score.

One of them asks to take a picture. I step closer to the casket and give a funeral home appropriate smile.

They are debating the best filter to use. Camphor makes him look like a zombie but Dapple highlights his disfigurement.

I feel defensive but of what I am not sure.

Camphor wins. The flash pops. The young man moves closer until the phone is right over my father’s face. For a moment he can’t get it in focus. Then he does. The flash goes off again. Again. Again.

When they show these pictures to their friends, they will think of me. They will wonder how I could have let things get so bad. They will make pacts to never let this happen to each other.

I excuse myself and find a smoking parlor that’s been converted to a supply closet. I step inside and lock the louver doors behind me.

Among the boxes of tissues, mints, paper, pens, and toilet paper, there are three shelves of black binders. Each has a year written on the spine in whiteout. I open the binder for this year. It’s a list of every funeral and how the person died. I flip to the page for today. They haven’t added my dad yet.

I get a pen from one of the boxes. I write my name and consider the appropriate cause of death.

I know it will be a car accident so it’s refreshing to imagine other possibilities. Firing squad? Drawn and quartered? Guillotine? A thousand cuts?

There’s a knock at the door. Mick and Nick are peeking through the slats. As soon as I make eye contact, their questions come at me rapid fire.

That’s it. I write it in the book.

Karen said the kids were asked to leave. They took a couple of smaller kids hostage. It got ugly. They kept saying the ransom was “good loot”. They wouldn’t tell us what that meant and wouldn’t accept anything the kids’ parents or the manager offered.

Karen and the kids line up with me at the casket. Mick and Nick take off their eye patches and bandanas without protest. The end is in sight.

The only people left in line are parents like us. They are just happy to be out of the house. They snuck in a dinner beforehand and still carry the faint smell of margaritas. Some of them remember us and want to play a kind of nostalgic tetherball so we can zero in on how and how long we’ve known each other.

Karen is deft at moving them along. They don’t realize they’ve been told what to do until they are already walking back to their car. Before long, there is no one left but us.

Karen wants to know if we can leave. If we hurry we can save the money of another night at the hotel. I tell her I need to square up with the funeral director. She knows better but doesn’t push me.

I walk them to the door. As they cross the empty parking lot, I begin to cry. Once they pull away, I wipe my face and go back to the casket.

The funeral director is waiting. I motion that I’ll only be a few minutes.

I lean down to my father. I tell him that when he shook his head and there was a sound that only he could hear, that was us. That was my mom, my sister, and me. And it’s not our fault he looked the way he did. It never was.

I want to drop something in the hole under his left eye and listen for it to hit the bottom, but I know it never would.

I tell him that for the longest time, I wanted to make my face look like his so that when people asked how it happened, I could tell them the truth. I would tell them you did this when I was little.

I wait, half expecting him to respond.

I touch his face with my finger, then my whole hand. Then both hands. It doesn’t even feel like skin.

Nathan Willis is a writer from Ohio. His stories have appeared or are forthcoming in various literary journals including Outlook Springs, The Fiction Pool, and Booth. He is a fiction reader for Outlook Springs and can be found online at nathan-willis.com and @Nathan1280.