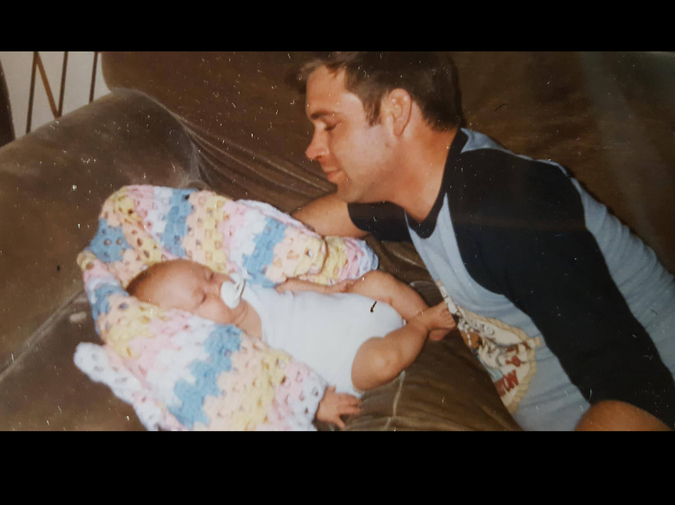 I have a hard time remembering my childhood. My old man and I trade stories about being kids, how he grew up in some anonymous small town in flyover country, and I tell him I can’t remember anything about my life in Georgia. He says it's because of my diet, because of growing up on Cheetos and Funyons and Coca-Cola, white bread, and TV dinners. But I think he's wrong. It’s possible my memory has been altered from years of substance abuse, that my relationship with my parents was painful and so I learned to compartmentalize in order to survive. When my old man asks me about the youngest parts of my life I mostly remember a lot of nothing, but here I will attempt to prove otherwise.

- Once I got motorized ATV for toddlers, kind of like a Barbie car but for boys, I guess, because I always wore jeans and at four years old identified as a tomboy, but maybe I was six years old instead. A photo of me exists somewhere standing on the ATV in pajamas, the Christmas kid-colored patterns clashing with the red plastic fenders of the vehicle. I tried to drive it inside my small bedroom in Georgia, the whirring mechanical sounds of it's cheap battery-powered engine, the plastic wheels scraping against a wooden door. I remember there was no room in the house for anything fun. I don't remember ever using it outside. I may have recreated this memory from the photograph.

- It snowed when I was eight years old. This was the first time I remember seeing snow since we lived in Georgia. I made a chubby, short snow man with my uncle who was, at the time, recovering from crack cocaine use, at least that's what my parents told me later. The snow was not very good. It was wet and we had to scrape the whole front yard just to get enough for the snow man, who ended up with grass and twigs all in him. I may have reconstructed this memory from a photo also but I remember clearly the sounds of my uncle's voice which seemed more childish than my father's, more easy going and less stern. I remember him making jokes though I can't remember the content of the jokes themselves, my desire to laugh at him, the way his beard grew in stubbled and unmanaged, how he seemed so happy-go-lucky. My father was a sergeant and so always was clean shaven. My uncle slept on our couch.

- I'm in a bedroom, but I don't know where the bedroom is situated. I am not in Georgia. Maybe I am in my grandparents’ house or maybe I am in the house we moved to in Colorado, but I was older when we moved and in this memory I am pretty young, six or eight years old. There is a lamp at the side of the bed. My dad is reading a bible to me. He is talking about Jesus. The next day we will dress up and go to church and open presents when we come home. Twenty years later I live in Pentecostal country and my mother is reminding me that I was baptized in the Methodist church. I ask my mom what being Methodist means and she says, "I don't know."

- We only go to church that one time, or maybe we only go to church when we spend Christmas in upstate New York with my grandparents. The church is Baptist. My grandmother hands me a fiver for the tithe. I put the fiver in the big golden plate when it comes my way and notice how all the hymns are projected on big screen TVs. We take photos at breakfast after the service, the one time we all dress up nice. A church friend tells my parents that the soccer team has uniforms now, and I wonder how my grandmother can give us all money for the golden plate they pass around when neither her or my grandfather have jobs.

- My father invents binge watching before Netflix exists. In the days before Christmas we go to Blockbuster and Hollywood Video (both!) and he rents a series of movies, some based on a book series called Left Behind about a man and his daughter whose family disappears in the rapture, and some about the life of Jesus. Christmas Day is filled with TV sounds, first of the parade, then the Charlton Heston movie The Greatest Story Ever Told, the one with Sidney Poitier, then of the apocalypse and rapture from Left Behind. We watch Barabbas and King of Kings. The TV is left on all day, my father watching in the living room while my mother cooks. In Left Behind, Kirk Cameron goes to the UN accepts the word of God. I sit on one end and my dad sits on the other end, a mountain of crumpled wrapping paper and opened gifts between us. I don't have to read about Jesus in the Bible anymore.

- My best friend and I drink cheap vodka in water bottles on Christmas Eve, watching Jesus movies with my parents. We were both eighteen, thought we were smart enough to hide it and I'm unsure if my parents knew and they just let us drink, or if they really couldn't tell.

- Waiting for my dad to visit, spending Christmas in upstate New York with my grandparents and my mother. One of my last vivid memories of them. I think I am 16 or 17. I contemplate throwing up the Christmas dinner contents of my stomach in the hallway bathroom but the house is old, the walls are thin and the plumbing may not hold up.

- Drinking with my parents on Christmas Eve. Making Christmas dinner because my mom is working. The sounds of the parade on TV, then maybe football, then Charlton Heston, again, always.

- any presents I got

- when or why we stopped going to my grandparents’ for holidays

- when I started drinking on Christmas eve

- the night I drank the entire contents of my parents' fridge when I was 21 and my mom found out Christmas morning because I didn't go to bed until sunrise (I do remember a couple cases of Guinness, plates of deviled eggs, pigs in a blanket, condiments, pastel tupperware containers of vegetables pre-prepped for Christmas day; I don’t remember what the sun looked like as it rose, I don’t remember falling asleep on the couch as she came downstairs for coffee, the first to be awake, as always. I do remember the black garbage bag filled with empty bottles that she carried to the garage)

- when I switched from regular Coke to Diet Coke

- when I switched from beer to liquor

- why my uncle stopped coming around to hang out

- when we stopped watching Jesus movies

- why we stopped photographing our moments together, when everything good is so easily forgotten

Elle Nash is the author of Animals Eat Each Other (Dzanc, 2018) and a fiction edtior at Hobart. She lives in Arkansas.