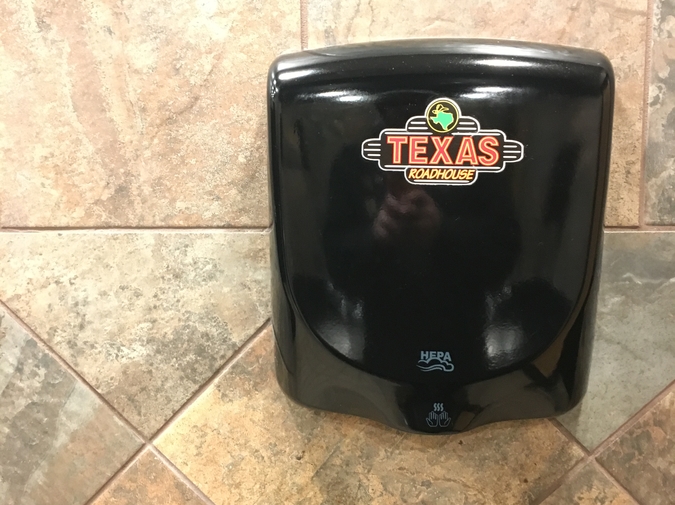 These bluejeaned teens in shirts
that say “I ♥ MY JOB” always ask:
Are we celebrating anything tonight?
Yes: we’re celebrating getting out
of the goddamn house showered
with passable outfits on.

Every book says I’ll miss this part.
Maybe early fatherhood is a state
best imagined from elsewhere, like this
Texas: imagined in Indiana, deposited
before a fading Sears in Kansas.
I love it here. The baby can’t

appreciate waiters dancing in the aisle
staring above all our heads. But I can.
How they keep chicken breasts
this moist is probably something
I don’t want to know. And holy moly
these green beans. I ask Kara for hers

but she says that’s an awful lot
of sodium. I’ve already eaten two orders.
We’ve become parents. My parents
say they’re proud, that we’re doing
a good job. But there are days when
I’m line dancing because I have to.

Where: 2329 Iowa St suite T, Lawrence, KS 66046
Who: The Poet, Kara, The Baby, The Poet’s Parents
What: My parents and I both ordered some variation on the BBQ chicken dinner. Kara got the four-sides-as-an-entrée but skipped her usual mac and cheese because we’re still not sure if the baby has a dairy insensitivity. I didn’t get the total because my dad insisted on paying.
Why: When you find a place that everyone agrees on—poet, wife, son, grandma, grandpa—you go. You go often.

Danny Caine is the author of Continental Breakfast (Mason Jar Press, 2019) and the chapbook Uncle Harold's Maxwell House Haggadah (Etchings Press, 2017). His poetry has appeared in DIAGRAM, Midwestern Gothic, Barrelhouse, and The New Ohio Review. He lives in Lawrence, Kansas where he owns The Raven Book Store. More at dannycaine.com.