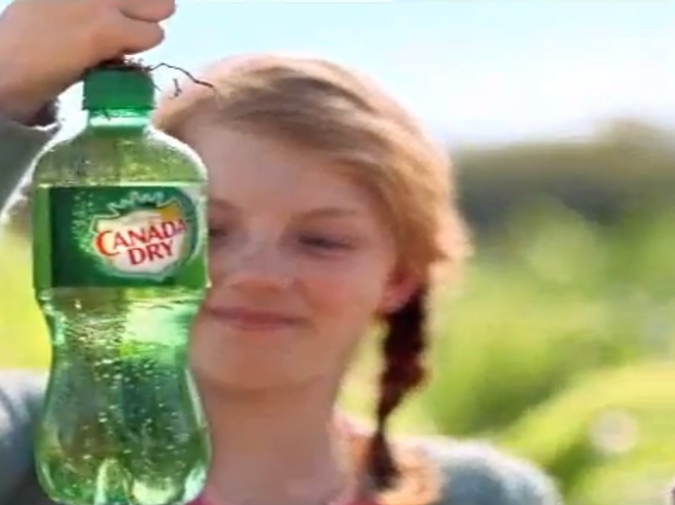 We weren’t always like this. How fat we are is what I mean. Most of us, when we first came here, we looked like models, like extras in a beer commercial or one of them romantic comedies. Carrie Newgent? She was here on First Day, same as me. Lives over there at mile post 0.27, near the row of the green portajohns and the FEMA showers? She was one of the first in line. This is before we even knew why we were here, before anybody even asked why a little girl would set up a Ginger Ale stand in the middle of nowhere. I’m talking before the news and the government and what the people from Canada Dry did. Point is, what I’m saying, Carrie Newgent on First Day was a sight to see. Now she’s I don’t know how much. Big lady. Like everybody from First Day, everybody from Year One, Two, and on like that. Now, we’re all big like this. Back then, though, man you should have seen us.

Interviewer: What do you say to people who worry that the…drink… you’re drinking. The ginger ale. Might have…addictive properties?

Carrie Newgent: [Laughs] It’s ginger ale! Soda. Same as they drink everywhere in the world. Same as you get at the supermarket or the 7-11 or a baseball game. Here [holds out a soda], give it a shot.

Interviewer: Some people say the field…that there are qualities.

CN: The field? [Gestures behind her] Its dirt and ginger. You can see that for yourself. You can go over there stick your thumb in it if you like. Plenty have done it.

Interviewer: But this is the only place in the world where those two things – ginger and dirt is what I mean. Where they combine to produce manufactured ginger ale. In plastic bottles. Bottles that have been confirmed to contain no organic materials.

CN: Well. Are we talking about, I mean, are you asking about the soda or the field or us or the girl?

Interviewer: I’m asking about all of it, I suppose.

CN: Well. [Finishes can of ginger ale]. Maybe what you want to be asking about, then, is the girl.

Claim: That in a field in Central Florida, a girl, known as “The Ginger Girl,” or by followers simply as “The Girl,” is able to produce or cultivate or unearth an unlimited supply of Canada Dry Ginger Ale. Followers and others believe The Girl somehow extracts full cans, bottles, and even trucks full of Canada Dry Ginger Ale straight out of the ground. First reported occurrences  took place in 2013, when a film crew captured The Girl (who was working at a ginger ale stand that may have been constructed by the Texas-based Dr Pepper Snapple Group, the third largest soda manufacturer in the world and the owner of the Canada Dry brand) dealing with a mysterious influx of customers by extracting fully manufactured bottles of Canada Dry Ginger Ale directly from of the ground. The resulting commercial and an article on popular website Gawker caused a global stir, and pilgrims began flocking to the isolated location soon after. In 2016, the Centers for Disease Control conducted a study that determined that while the average site resident, known as the Ginger People, had gained an average of 135 pounds, none of them showed any signs of those diseases most commonly associated with obesity. In 2017, the group was classified as a cult by the FBI, and the Dr Pepper Snapple Group officially cut all ties and financial support for the area. In 2018, the space was declared a disaster zone by Florida Governor Jenna Bush, and the Federal Emergency Management Administration moved in to supply running water and hygienic plumbing facilities for site residents. Despite mass demand and government interest, no scientific tests have been conducted on The Girl, who is purported to be immune to the aging process, and who the faithful believe still manages the day to day cultivation of the area’s soda crops.

….But Swift got more than she bargained for when she stopped by the infamous Canada Dry Central Florida “Ginger People” Plantation for a  long-rumored meeting with the mysterious “Canada Dry Ginger Ale Girl.”  The Girl has long been believed to be the subject of the Swift-penned song “Miracles in the Sun.”

The Girl, a controversial figure who has been reported to be, in actuality, as many as twenty hired actresses working on a set fashioned by George Lucas’ Industrial Light and Magic, reportedly paid no attention whatsoever to T Swizzle’s slow burn in the Central Florida shade, preferring to spend her time, as always, feeding her flock of soda worshippers without so much as a glance toward the Swift delegation.

At 2:42, a full three hours after arrival, the blond hitmaker tweeted: “Some people are ruuuuude!” At 2:45, her caravan of tour buses was reportedly back on the road and headed for Jacksonville, where she wowed fans with a sold-out concert that featured her usual bevy of chart-toppers and choreographed dance numbers. She did not sing “Miracles in the Sun.”

People ask why we stay. They make fun. I know that. People think we don’t know but we do. Yeah we live in a field, but we have the Internet. We have cell phones. Now that FEMA’s been out here we have showers, toilets.

Here’s what else: I haven’t spent a dollar in twelve years. I don’t have a bank account. A mortgage. I have a tent and a cot and a sleeping bag and three bottles of Canada Dry a day turned up right here out the Central Florida soil.

Yeah I weigh more than three hundred pretty sure. Most of us do, is what they say. But I know for a fact nobody here been sick since the day they came. Ain’t nobody died. You think about that and you tell me would you leave.

More than five thousand of us been here for over twelve years and we all weigh three hundred pounds and not a one of us has died.

Interviewer: Do you still like it? I mean, do you still get enjoyment out of it?

Once you seen a girl, and this is a little girl we’re talking about, pull a truck out of the ground from a ginger plant. Once you seen that you can’t go back to your normal life how it was before.

The same people tell me Jesus turned water into wine will stand right there and tell me to my face what The Girl did ain’t holy. Relatives of mine done it, standing right where you are now. How come she ain’t aged a lick, I ask them, in over ten years? How come I’m still standing here ain’t ate nothing but Canada Dry those same years? They can’t answer me.