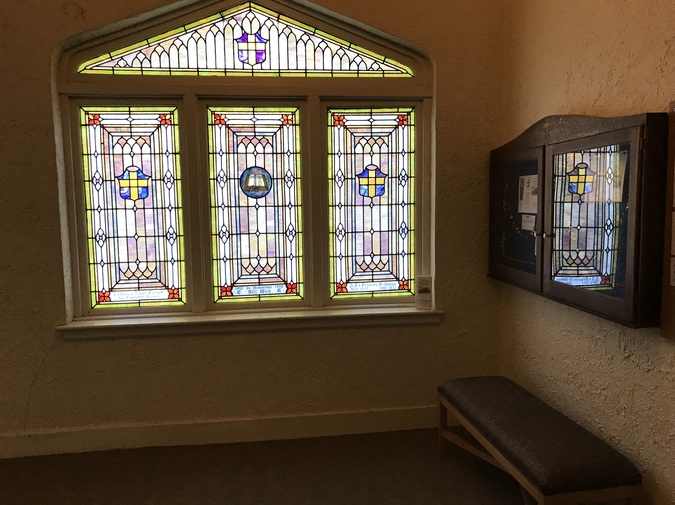 They smoked in the campus chapel at night. They had no paint and put red frosting on their faces. Maren got an infection from trying to frost her eyes. These were the parties. An old dog wandered around. Someone blew smoke at the dog and said, “Let’s get Dubsey high.” A girl named after a country wore a metallic jumpsuit and gave tarot readings. “No judgment, I’ve heard it all,” she said, but she was in fact judging their questions.

In one card, an enormous, heavy-browed angel blows its horn. Gray bodies emerge from coffins adrift in a rising sea.

In another, the devil stares directly into your eyes. He looks wounded, confused, as though he is as trapped as the man and woman he’s chained to his altar, as though it pains him to do what he has to do.

Maren had met the devil in Sunday school. He was a puppet with a plush oval head and a big nose. He’d hiss at the children from above a folded-up room divider that’d been painted to look like a door to hell, black and red with a gold knob. Satan’s limp little legs would hang over the transom. He’d yell insults till they recited just enough verses to cause the devil pain. Then he’d groan and ache, sinking away behind the screen, and her teacher would re-emerge.

There is no devil. There is a devil. I give up.

They smoked in the campus chapel at night, sitting in the pews. An old dog made his way down the aisle and up to the pulpit as if to testify about his faith. A glittery girl handed Maren two cards. In one, a skeleton in a suit of armor rides a white horse with red eyes. A bishop in his robes stands before them, hands clasped, either begging or praying. In another, a man hangs upside-down, arms tied behind his back, a bright glow around his face.

When Maren was a child she could not watch any baptisms. The sanctuary would grow too dark; morning light would barely filter through stained-glass windows (loaves and fishes, a dove). The pastor would slip away as the to-be-baptized arranged themselves before the congregation. The music minister would pass the microphone down the line. Most would know the language, but a few would be shy, lost, put on the spot. They would look helplessly to the music minister. He would not move on but would only urge them to continue. They would begin to cry. The congregation, believing their tears to be cathartic, the tears borne of growth and surrender, would applaud. The to-be-baptized would then file out through a side door. The pipe organ would play no particular song. The red carpet of the platform would seem to grow deeper and redder. The choir would sit, waiting for their cue, an audience themselves though onstage. The pastor’s pulpit would seem lost without him. There would be nowhere for anyone to look. The pews, long honey-pine benches that curved at the top, had slots in the back for hymnals, Bibles, and little eraserless pencils. She would draw and write on her church bulletin, using a hymnal, never a Bible, as a sturdy flat surface, and try to ignore that her stomach was churning, a strange pit. The redness and the darkness and the organ signaled that everything had changed and would. A spotlight would appear above a V-shaped pocket jutting out of the wall, high above the stage. The pocket was filled with water, which became apparent only when the pastor, wearing a white smock-like robe, would slosh his way into it. The to-be-baptized, one at a time, also wearing robes, would slosh into the loft along with the pastor. He would speak briefly about each of them, every sentence in the same soft but emphatic, halting rhythm. In the end, he would say, “You are buried with Him” — here he would put his hand behind their backs: they would hold their noses, close their eyes: he would push them into the water: lift them — “and raised again, a new life.”

Cathryn Rose is a contributing editor for Catapult, and her work has appeared in Tammy, Pulpmouth, and Dream Pop. She's from Portland, Oregon via Houston, Texas.