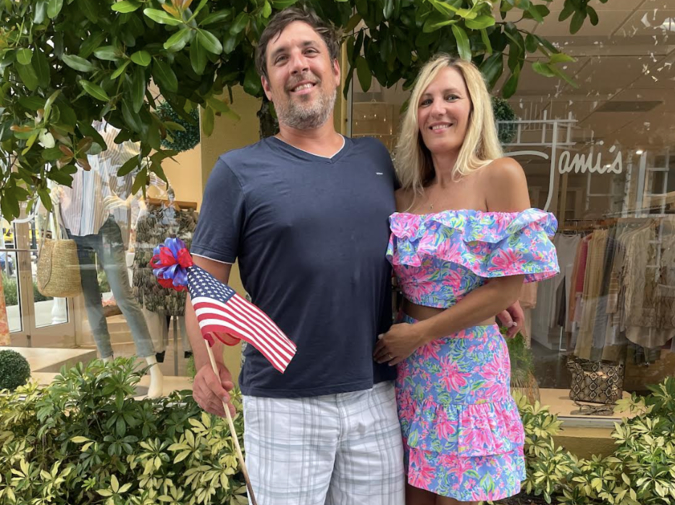 One of them kept giving him restaurant recommendations for Naples, kept telling him who had the best Chilean sea bass which was supposed to be, according to my husband’s suitemate, the best fish you could order

“Do they have sex?” I asked

but that was in two weeks

“She was really stupid,” my husband said of the young opiate addict who was caught fucking her boyfriend during visiting hours in the tv room bathroom. “If she hadn’t barricaded the door to the tv room she wouldn’t have gotten caught”

There was a Lilly Pulitzer shop and because my daughter had gone thru a brief Lilly Pulitzer phase when a freshman in college, I didn’t feel as intimidated by the store as I did by most of the others

I didn’t even know what Kendra Scott was, for instance; if it was fashion or jewelry

I walked around the various rooms pulling dresses; I had five different outfits of varying degrees of neon pink and green and blue colors to try on

I tried on a pair of wedges too

It had also occurred to me I was staying at an Airbnb in Naples, Florida to be close to my husband while he resided at the Betty Ford Center and I was a different person in Naples, Florida with a husband in rehab than I was back in Ann Arbor, Michigan where I was a writer

I worried I didn’t look like a Barbie doll

More importantly, I wanted to feel good abt how I looked while eating Chilean sea bass in the top rated restaurant in Naples, Florida w my husband even if my husband was wearing shorts and a t shirt same as always

But out in the public, walking down the street,  sitting at the table next to my husband in his navy blue Guess t-shirt, I just felt like a dick

The Chilean sea bass came and my husband’s Betty Ford suitemate was right: it was phenomenal

But I still couldn’t help feeling like a dick

And walking to get ice cream later

And walking over the crab bridge to our hotel after that:

“you look beautiful, baby,” my husband said but I sensed some forlornness in his voice

We’d eaten there twice before

I was wearing sweat shorts and a tank top

My husband was wearing sweat shorts and a t-shirt

Which meant No Rehab Skanks

We had lemonade and iced tea

And it was probably our happiest night in Naples

I’d never been so close to wild dolphins

I’d said to my husband, “I’m not moving until I can’t see another dolphin!”

And my husband had laughed the way he laughs when he’s not trying to be a tough guy,

The way I imagine him laughing as a young boy,

before the beer and weed and girls

before the coke and Adderall and opioids

Or maybe I had asked what he would miss most

Either way he had said, “I don’t know, the goofiness? The silliness?”

Now that I’m back in Michigan, on my way to Ohio, that’s what I miss most too.

I drove back down to the Betty Ford center at 930

Parked a couple blocks away

Left my shoes in the car

And walked barefoot in the alleyways around the center

I was listening for my husband’s voice

In the outside smoking area

Where the younger addicts congregate til 11

“that’s so and so’s girlfriend,” my husband said when we drove by the smoking area

A few days ago

“they’re one of the couples in here”

I felt crazy every time we parted now

Especially on the nights he wanted to go back early

Before he had to (at ten)

Last night he wanted to go back at 8

They had tapered him down to 2 mg Suboxone from 32

Still, I imagined him telling me goodnight then going down to the smoking area

It seemed almost impossible my husband wouldn’t flirt w her

I was depressed and anxious after he called to tell me goodnight at 8:45

I dipped back behind a wall, stood up straight like in the movies

I wondered if the Betty Ford Center cameras had seen me

If someone would tell my husband

I imagined him yelling at me

Telling me how fucked up I am (again)

As if I didn’t know

I couldn’t hear any of the young addict’s voices

I had thought it would be so easy to hear my husband,

Teasing some young alcoholic or junkie

To one of their rooms (“they don’t do bed checks til 2 am, I learned that”)

Drive home and smoke a half dozen cigarettes

On the outside patio of my Airbnb

Get eaten by gnats, sleep two hours on the couch, wait to see if my husband texted me in the morning, check on the young iguana in the bush

I feel like Brenda Frazier, the “Poor Little Rich Girl”,

My husband texted me same as every morning

Only this time I called him right away

Instead of texting back at 8 or 9

He must have been so surprised when he saw me calling

I worried he would be angry or resentful

Now I could sleep

Knowing I would see him at 3 same as always

He wasn’t going down to zero

Unable to see his wife

Everything was going to be ok

Maybe we would go to the beach again

Swim out to the sandbar

Boil crab legs on the stovetop

Finish reading to each other from The Old Man and the Sea at the dining room table.

While watching for fireworks

While everyone else was down at the pier.

We had to hurry to make it back to the hotel before the fireworks traffic started up again from the beach.

Elizabeth Ellen is, unfortunately, a writer. Her favorite all-time writer is Charles Bukowski. Hemingway is a close second.