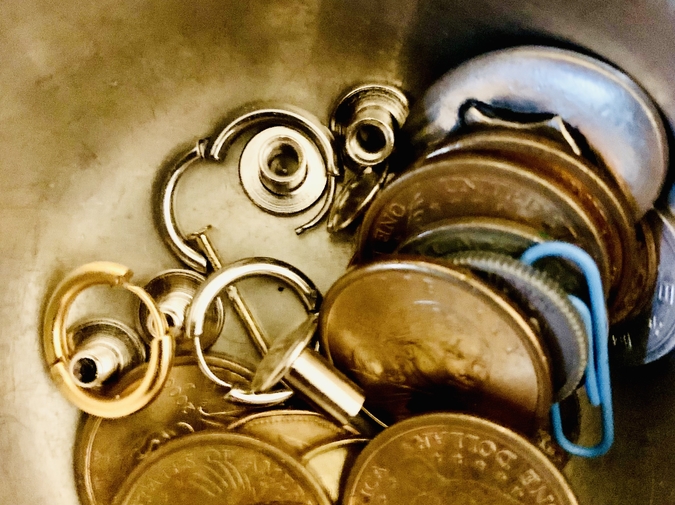 My father never wears color, and the absence of it, of saturated tones, is one of the first things I recognize when he slides into the booth across from me. His clothing, unadorned, soft slacks, expensive leather sandals, is familiar in a way that makes my heart swell. Sometimes when I’m sitting on the train, elegant slender men will sit beside me and I’ll let myself, for the twenty-minute commute, believe that they are him.

The problem with Austin, with meeting him here, is that Texas is humid. After all this time, I need him to see a version of me that is not moist or nervous. I need him not to see me unsuccessful or overweight or scared or lost or poor or disappointed. But in reality, I am only not some of those things.

When I was small, I was certain he hung the moon. It’s still a possibility—I can, in fact, imagine his immaculate frame climbing a ladder upward—but in twenty years I’ve become less certain about everything, even him. The experience of walking around on this dirty Earth full-grown has made it harder to believe in anything. Everything. Or maybe I’ve just become disenchanted with the idea that hanging the moon was an important enough job to justify a disappearance.

My father is a soy milk person, but international houses of pancakes do not have soy milk and Janet, our waitress, is not affected by his disappointment. For Janet, my father’s disappointment is the disappointment of an itinerant customer, a man who will not tip well and whom she will not see again. Janet will return to the register, to the desolation of adulthood, to peeling off her neon fingernail polish and reading April’s Cosmopolitan in May. Janet will forget my father and for one moment I wish so much to be Janet, my stomach aches.

The problem with meeting him now, too late, when I’m twenty-eight, is that my memory is jagged and not everything I remember is good. Did he miss my graduation or did I ask him not to come? Did I block his number or did he forget to call? Was he hanging the moon or loving someone else? In reality, I never really ask any of these questions. I don’t want to know.

It’s his skin that I think about the most. His hands were dry and warm, even at 102 degrees, even standing outside in suffocating heat on summer nights. When I shift in the booth, my skin adheres to the red vinyl, the uncomfortable stickiness like maple syrup on the backs of my legs and suddenly I hate his dry skin and the millions of other ways I do not resemble him, am not his daughter.

“I wrote you a letter,” he tells me—and I guess that’s true. An email is a letter, though it feels less significant. “Last year, on your birthday, I wasn’t sure if you read it.”

“Happy Birthday,” it read. “I hope we can talk soon.” He had signed it “Best,” full name, middle initial.

I think about all the other gifts he didn’t give. My eighth birthday? A leather-bound edition of The Lion, the Witch and the Wardrobe and on the first page in careful handwriting: Find magic in every closet. Love, Dad. When I was fourteen, a locket with Follow your heart, Love Dad etched inside. At eighteen, a plane ticket and a note: You’re too old for gifts, go experience something instead. Love, Dad. What actually happened: my father doesn’t believe in gifts and he does not sign things with love.

In reality, though, he did hold my hand sometimes, at eight and fourteen, in places where people could see us and see our eyes, and maybe realize they were the same. And his skin was always warm and dry.

When Janet comes to take my order, she tells me I can’t have pancakes because the cook left and they don’t do breakfast after ten. But then she looks at me and looks at the urn on the other side of the table and tells me she can do blueberry or chocolate chip. That’s when I remember where I live and how old I am. I am not in Austin and I am not eight and my father is not going to give me anything. But in reality, I still don’t believe it.

Wynter K Miller is a writer and editor living in California. She almost never tweets @wynterkm.