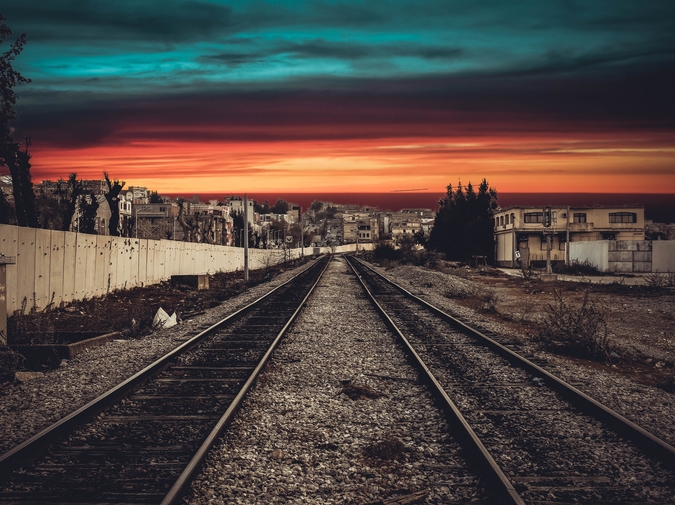 The train trembles across the tracks, its wheels keeping time like a frenetic metronome. In the window, your reflection is transposed against an oily black sky and far-off city lights. You glance away, unnerved by the quiet panic flickering across your eyes. Inching closer to the window, you distance yourself from the college kid who introduced himself as Luke and reeks of Doritos and weed and sits uncomfortably close to you. He probably thinks you don’t notice his furtive glimpses at the T-shirt stretching across your breasts, but you do. You like the icy pane of glass against your cheek. It reminds you of a cold shower after a night of too much Wild Turkey capped with too many cigarettes.

You wonder why all these people breathing into the stuffy darkness are riding Amtrak at one in the morning headed to a shit town like Del Rio. Then you realize you don’t care. You want only to never make it there. Maybe the train will collide with a cow, derailing. Cows strike you as eminently stupid. Or maybe one of the passengers will lose it and start shooting at people in the train. A stray bullet could hit you. A few years ago you read in the paper that some guy went berserk in a North Dakota diner across the street from the courthouse. He fired off gunshots at the ceiling after he lost custody of his kids and was pissed off at his wife and wanted to send a message to the judge. Not a very effective act, you remember thinking.

You consider getting off at the next stop, if there is a stop before Del Rio. You were planning to break up with your girlfriend Emma right before you found out about your dad, but decided you could only deal with one disaster at a time. You used to think you were good in emergencies, went into crisis mode, but maybe death doesn’t qualify as an emergency, especially if you knew he was dying and never called him or responded to his wife’s emails.

Sadie, I’m writing to tell you that your daddy’s cancer is back, in his lungs now. He’s in an awful lot of pain but they’re doing what they can. I know you haven’t talked to him in a long time and you don’t much get along but it sure would be nice if you called.

For days after you got that email, you had Townes Van Zandt’s “Lungs” stuck in your head on a grievous loop: “Won’t you lend your lungs to me? Mine are collapsing…who’ll kill the raging cancer?” It contained a certain logic, that the cancer had spread to your dad’s lungs, that album a frequent soundtrack of your childhood, your clumsy child fingers twisting up the stereo’s volume knob, attempting to smother the sounds coming from your parents’ bedroom while you scuttled around trying to tidy the house to minimize the ensuing wrath. Crisis mode.

As an adult, crisis mode prompted by death usually involved you baking unnecessary amounts of cranberry walnut bread and hand-delivering the warm loaves, swaddled in cheesecloth and twine, and you certainly didn’t feel like doing that. You felt too guilty about your indifference to even go through the motions of grief.

Sadie, this is Kerry Ann. The doctors say your daddy has kidney failure. They had to stop the chemo. He asked about you once, a few days back. Thought you should know.

People probably just let the bread get stale on their counter and then throw it out when the ants discover it.

Well, your auntie Rosalee is here. She said you’re stubborn just like your daddy, but whatever you’re angry about happened a long time ago. Let bygones be bygones, Sadie. I know he can be a difficult man but he’s your dad. He don’t got a lot of time, the doctors told us this morning.

She had no right to insert herself into your life, an affront to the years you lodged between you and your dad. His illness did nothing to change your resolve to not speak to him. Letting “bygones be bygones” didn’t mean you had to mourn the loss of a cruel man whose only positive impact on your life was instilling a deep love of old blues and country music, Van Zandt but also Loretta Lynn and Lead Belly and Odetta and Johnny Cash. As Loretta sang, “And after that I saw the devil in your eyes…you hung my wings upon your horns and turned my halo into thorns.” You wondered when you stopped being a good person.

Luke pulls off his headphones and twists his body to face you. He clears his throat and asks, “So, ever been to Del Rio?”

“I guess if you like cactus and humidity,” he says. “I could give you some pointers on places to go.”

You imagine Emma sleeping with the cats lounging across your side of the bed, unaware that a few days ago you were spending your breaks at work looking on Craigslist for a room to rent. You try to remember what it was like to be madly in love with her, to find charming the way she knitted and canned preserves and watched trashy TV. You do remember the point when you began going to dive bars, leaving her at home to let dykes too butch for your taste hit on you, then flirting back once you’d knocked back enough shots, recklessly biking home drunk in the middle of the street with your helmet still clipped to your backpack and the wind whipping through your hair. You were convinced that eventually you would get hit by a car—that you had it coming to you, as your dad used to shout during his drunken scenes—but you never did. It’s a hard thing to understand when you’re a kid, the deserving of things good or bad, but now you think that no one deserves anything. Life just happens.

Each time you made it home alive, a part of you was disappointed, but the disappointment was laced with euphoria. You had taunted death, and survived. Emma would emerge from the bedroom at the sound of your inebriated bumbling, her eyes flaring, hair rumpled with sleep. “What time is it?” she’d grumble. “Do you have to be so loud?” You’d laugh and waltz into the kitchen to forage through the fridge, impervious to her questions.

They were followed by a link to his obituary in The Del Rio Chronicle. The obituary was sparse, sanitized. You could hardly register the information, but you read that he was survived by his loving wife, Kerry Ann. No mention of a daughter. No suggestion of the years he spent using his first wife’s skin as canvas to paint out crude narratives, making bruises blossom into angry shades of purple and blue, then green and yellow, sometimes requiring stitches to hold together the frayed pieces as blood seeped through. Strip away those irrelevant years, gloss over the habitual unemployment and drug binges, fast-forward to him finding Jesus (“After a long battle with cancer, God has mercifully brought him home to rest in Heaven”), provide the date, time, and location of the funeral service, and there’s not much left to say.

A man’s life reduced to 78 words. You counted.

Emma was at work when you got that last email. You closed your laptop, pulled the curtains shut, lay down on the bedroom floor, and listened to Odetta’s My Eyes Have Seen album at full volume, staring at the ceiling where the cracks in the plaster made a shape that looked like Michigan. Empty, detached, a body on the ground, there and yet not really there, letting Odetta’s throaty voice wash over you so nothing else could get through.

Even though you could never quite forgive him for “whatever happened a long time ago,” as Kerry Ann quaintly put it, you’re pretty sure you’re supposed to be sad. At least a little. After the final song’s last notes faded out, Odetta’s 1959 cover of “Battle Hymn of the Republic,” you stood up and walked over to the small ovular mirror hanging next to the bed. You stared intently at yourself, into the hazel eyes you inherited from your father, searching for indications that you might contain other pieces of him. You decided you needed to see him one last time, now that he was rendered incapable of inflicting more damage. You needed to look at him and confirm that he was just a man, susceptible to mortality like everyone else. You could not fear a dead man.

You booked the soonest possible train from Tucson to Del Rio. It left the next morning. The trek was 14 hours, 47 minutes. A flight would be too quick, too unreal. You needed that time to prepare yourself, and the geographic range to let it sink in. He was finally gone.

In the darkened train, you realize you’re scared you won’t react like the people in Del Rio (family, you remind yourself, those people are your family) will expect you to at the funeral. Think about the final scene in Dancer in the Dark, when the executioner hangs Selma, you instruct yourself. That could rouse tears, or at least genuine emotion, paired with enough alcohol.

Almost everyone around you is sleeping. In your peripheral view you can see the boy eyeing you again. Luke. You wonder if he has a girlfriend, and conjure an image of her as an earnest college freshman who listens to Joni Mitchell and has long brown hair and likes getting high with him. They probably have awkward sex with the lights off, but they think it’s really good because they don’t know better.

Almost without thinking, your hand snakes from your lap where it was gripping an unopened book. It seems unattached to your body, independent of your will. The dim aisle lighting casts deep shadows across the seat, but you know Luke is watching your hand as it reaches for him and fumbles with his belt buckle and unzips his jeans. He inhales sharply with the low groan of the zipper, and then his breathing quickens, heavy and thick. You begin fondling him, close your eyes and rest your head against the seat, wishing to be anywhere but here, but somehow wanting this, too. You wonder what kind of person does this with a loving girlfriend waiting for her at home. Something is wrong with you. Your hand moves to the beat of the tracks, up and down, up and down, until—so quickly!—the boy gasps and softens and your hand is splattered in viscous wet. It seems unkind to be repulsed, but you are.

You wipe your hand on the seat. No telling what other substances coat the coarse navy fabric. Next to you, he fastens his pants, takes your hand, and mumbles thank you. You almost laugh. He’s even more surprised by what just happened than you. You don’t respond. Outside, heat-lightening shatters through the darkness, accentuating the landscape with a startling violence. It illuminates the flat, ugly expanse of West Texas, briefly. You are still holding Luke’s hand.

Jessie Carver is a writer and editor who lives in Portland, Oregon, but grew up on a farm in the borderlands of New Mexico. She doesn’t know how to not write about death and tweets at @Jessie__Paige.