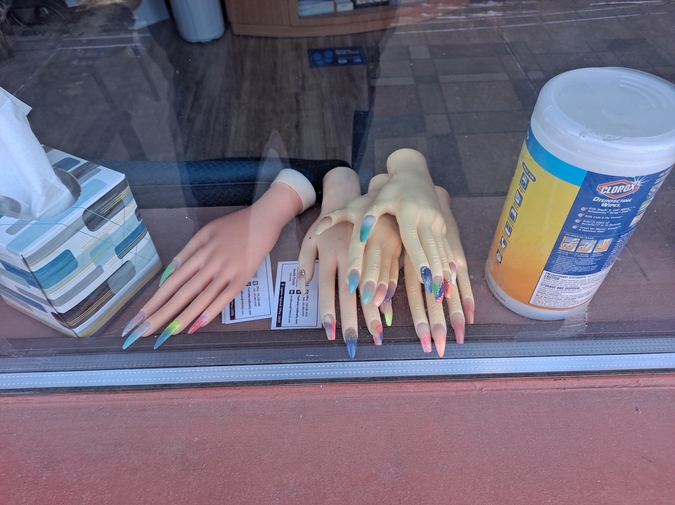 Since my mom died after my second wedding, I don't have anyone to tell me if my mustache is showing.

When I was ten, Mom walked past the bathroom where I sat on the counter with my nose an inch from the mirror. She smiled and shifted the laundry basket to her other hip. “You can barely see it, babe.” I tugged my upper lip down to get a better look.

Not long after that, she came home from the store with a bag and a promise.

“I’m going to fix it,” she said and tapped her lip. She pulled a turquoise box of Jolen Creme Bleach out of the bag. She looked at me like she knew another boy at school had asked.

I lay down on the bathroom rug, which was itchy on my back, and Mom smeared the bleach over my lip. Jolen reeked. I mouth-breathed. My eyes watered. “Should only take 10 minutes,” she said.

She had smoked, once, with me, the day I told her my first husband had an affair.

Yet doctors in one bleach-stinking oncology unit after another ignored my insistence that their stage IV lung cancer diagnosis must be wrong since my mom was 1) healthy, 2) young, and 3) my mom.

My blue-eyed college roommate had a perfect ponytail, cooperative eyebrows, and no visible hair on her upper lip. Our dorm crammed hundreds of undergrads (whom I called The Hairless) into shared bedrooms and communal bathrooms. Jolen Creme Bleach might asphyxiate The Hairless.

By the time I married the man who cheated, I’d been plucking my mustache for years.

Years before the lung cancer diagnosis, I’d worked as a business consultant in a for-profit hospital. Our job was to keep the ailing oncology unit afloat, profitable. An oncologist there had referred to lung cancer as a “death sentence.” Sick lungs fail fast. Cash-strapped cancer clinics couldn’t invest in bungled lungs when promising prostate patients waited.

I woke up both mornings after both weddings (eight years apart) to sneak into both hotel bathrooms naked and raccoon-eyed so my new husbands would wake up to a mustache-less bride. Then I slid back into both beds with a bare upper lip.

Seven days after my second wedding, my mom’s diagnosis showed up. So, I moved into my childhood split-level in Illinois rather than into my husband’s studio in San Francisco. Doctors said Mom had three, maybe six, months. They said so, then rushed—or so it felt—to lunch, or the next patient, or to anywhere but where we were. Could they even see her?

Ten months later, I was still living with my mom, not my husband. Still doctors insisted her time was short, and still Mom felt she had more living to do. So, Mom and I moved to New York City and rented a studio so she could join a clinical trial.

For a year, in lower Manhattan, a thousand miles from home, she was visible to doctors through her illness.

I saw her in ways I hadn’t before: schlepping hand carts of groceries from Trader Joe’s, dying her hair blonde for fun, calling the Big Apple “my city.”

I was pregnant with a child who I knew might just meet his grandmother after all. Mom held signs next to my belly: 18 weeks! She sent pictures to my husband so he could see me changing.

On the Sunday before Thanksgiving, with my 13-month-old asleep in a guest bedroom upstairs, I heard her inhale, barely, and not exhale.

Only after I invested in laser hair removal did I understand it wasn’t permanent.

I thought about how my son would only know his grandmother through iPhone pictures and through one video I took on the last day she spoke where as a baby he sat on her belly and played pat-a-cake.

Mom begged me, more than once, to let my husband in on my mustache. Tell him about the laser treatment. Let him ice your lip. Let him see you.

After someone watches you give birth, it becomes easier to let them see your Whatever.

I’ve learned to lie back during laser sessions, to pretend the treatment table’s crunchy paper is a bathroom rug, itchy on my back. “Should only take 10 minutes.” Zap. The feeling: A rubber band snap.

“Will you read this?” I ask my husband on the couch. He slides my computer to his lap and mutes cable news. We are close enough that he can see my mustache if he looks.

Nikki Campo (she/her) writes essays and humor. She is weirdly good at jigsaw puzzles and Mom to three loud kids. Her work has appeared in McSweeney’s Internet Tendency, The New York Times, The Washington Post, and elsewhere. She would be delighted if you felt like reading more at nikkicampo.com or following her on Twitter @nikkicampo.