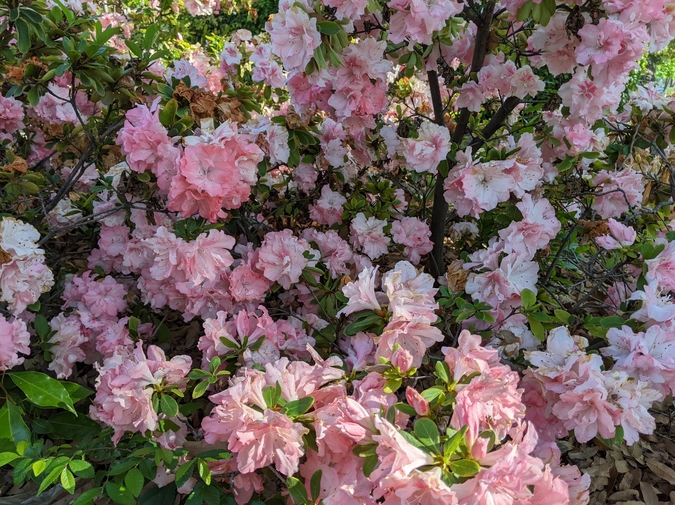 Through her meditation app, an angel voice tells her to let go of thinking and focus on the breath. She shakes her head like a wet dog and counts ten breaths, tracing their edges as if she were outside of them.

She visualizes the things she wants for herself. She wants to get promoted, adopt a cat, own a house: something in Echo Park maybe, teal blue with arched doorways and string lights on the patio. Inside, a vintage mirror from the Rose Bowl Flea Market will hang above an angular, mustard yellow couch. She envisions pillows, hand-sewn, and she tries to imagine the color and texture of them but she can’t, she can only see the nineteen-year-old lying on one, his long hair gnarled and fanned like a male Medusa, and her on top of him, riding, while she looks down at the straight teeth in his open mouth.

The conference room explodes light and her eyes snap open. Her boss is in front of her. He looks almost proud when he says, “Preparing for the big presentation?”

Alex smiles and nods, unfolding her legs. He takes a seat, unsuspecting.

She sips a watered down cocktail through a metal straw and says, “My sacral chakra was like, on fire during my meditation yesterday.”

Across the table from Alex, Jen’s eyebrows pop over her Ray-Bans. Finn, Jen’s five-month-old baby, squirms in her arms, lurching his fists toward his mouth. Jen lifts up her loose-fitting gingham top and he latches onto her boob immediately.

They are at a Kids Welcome! backyard baby shower for a woman from their book club, sequestered off at an aluminum side table. Children are gathered around iPads and their moms are in organic cotton dresses, holding champagne flutes. Childless Alex is kind of drunk, wearing an Urban Outfitters jumpsuit that she hopes passes for Anthropologie.

Jen leans close to Alex and says, “You are not still thinking about that kid, are you?”

“Would you stop calling him that?” Alex says. “He’s legally an adult.”

Finn releases his gummy grip on Jen to squawk. She bounces her arms until he finds her nipple again, synchronous with Alex finding her straw with her mouth. Jen gestures toward the drink with her head and says, “Yeah, that cocktail right there? He can’t drink that.”

Alex swallows and feels crushed mint under her tongue. “Yes he can,” she says. “He has a fake I.D.”

She knows this because they’d met at a bar.

It was a Tuesday after work and she was experimenting with “mindful walking” on her way to the train, looking around instead of down. Through the window in a strip mall, she saw the soft glow of neon rope lights around hard liquor shelves. A taxidermy deer head hung on a wood-paneled wall, and a red-haired woman along the bar wilted into her beer. Alex held her breath. The darkness called to her.

She slid onto a stool and ordered a gin and tonic, using an Open Mic Tonight! flyer as a coaster. A vacant microphone idled in front of scattered black tables, mostly unoccupied. Under dim lights, she looked at her phone. Jen had texted her a New York Times article on breast milk jewelry: necklaces and rings made with stones constructed of dehydrated breast milk and resin. So cool., Jen wrote. Alex thought it sounded disgusting but clicked the link anyway. She didn’t register any of it. A performer had taken the stage.

He was young. His eyes were shut, tight and concentrated, and his shoulders were curved around his guitar. It was summer but he wore a sweater, its sleeves hanging loose at his fingers. His long hair was a brown halo around his scalp that faded into a brassy, oxidized blonde. His voice cracked when he sang, but it seemed like a choice. Alex guessed he was high.

The bartender asked her if she’d like another and she said yes. She took her new glass off the bar and turned back to the performer, noticing that he’d now opened his eyes and was looking at her. She looked back. His song ended and a few people clapped. She smiled with her mouth closed and turned back toward the bar. Waves rolled inside her stomach as she pretended not to notice him walking over to her, sitting next to her. She only turned to him when he asked, his voice deep and exact, if he could buy her next drink.

When she was younger, she never noticed how her face and the faces of her friends didn’t have lines on them, how the skin underneath their chins didn’t stretch or sag. Now she knew that skin was the difference between youth and not-youth, observable only by those who have already crossed the divide. The boy-man next to her was entirely unaware that his face looked like it was smooth molded plastic, hardened around his bones. Wisps of hair collected above his lip, along his jawline, and in the hollows of his cheeks. His eyebrows were unapologetically untamed. He had dimples when he smiled.

“I think I should be asking you that,” she said. “Do you have a parent or guardian present?”

He threw his head back, so easy, and laughed. “Ah, come on. Let me get you one.”

Her stomach was warm from the previous two, so she did. She sucked the last bit of her drink and watched him order two more. She liked the way his blue nails looked wrapped around his cocktail glass. He asked her where she’d gone to college and if she had a boyfriend, and she didn’t ask him anything. People, increasingly drunk, kept walking up to the mic to say or sing something, but he didn’t turn to look at them. His eyelashes were thick and she felt like hers might be too. Halfway through her drink she needed to know how old he was. He didn’t want to tell her, but when she grabbed her purse and got up from her seat, he said, “Okay okay okay. Nineteen.”

A perfect fifteen years younger than her. For reasons she did not understand, it really did feel perfect.

They kept drinking and their legs touched under the bar. He told her she looked like Liz Phair and she asked him how he knew who that was.

“I googled her after I saw a cover of ‘Fuck and Run’ on TikTok.”

He said it earnestly but then they both laughed, and that’s what Alex liked, that he knew this was crazy too. He put his hair behind his ear and looked from her eyes to her lips. She rested her cheek on her palm, tired.

“Do you want to get out of here?” he asked her, his voice low.

A gloomy girl with a saccharine voice strummed her guitar at the microphone. Alex glanced around the room and caught the eye of the redheaded woman a few seats over. She had forgotten about her, the sad solo drinker, but Alex knew then that the woman had been listening to their conversation. Her face burned from the inside.

He said, “You’re hot,” and he seemed serious.

His tongue moved behind his closed lips, making his mouth change shapes. Alex looked at him and remembered herself at nineteen. She had cared so much what others thought of her, and she wanted badly to be attractive and to please people. She felt that people expected these things of her, and she didn’t want to disappoint them. She was astounded by the brazen confidence of the nineteen-year-old in front of her, asking for what he wanted. Thinking he could get it. Did men just get to feel this way?

“You probably don’t even have anywhere to take me back to,” she said, and it came out meaner than she intended.

He laughed like he didn’t mind and told her, “I have a car.”

She was not going to fuck him in his car. But she did walk him out to the parking lot and lean her back against his Camry Hybrid, light blue made gray by the blanket of dirt covering it. He ran his fingers through his hair and told her the backseat was roomy.

“You’re disgusting,” she said, but she was laughing.

His eyes softened, focused only on her. He lowered his head as if to kiss her until she stopped him with her hand on his mouth. Her thumb skated along his lips, her fingers settling into the downy fuzz of his cheekbones. The cartilage in his throat genuflected when he swallowed and she watched it, hypnotized.

He stood in front of her with his hands at his side. She felt his breath under his nose. He opened his lips and licked her thumb, calling it into his mouth, and her submission to the position felt almost instinctual. She pushed her thumb through his teeth and reached for the back of his throat. She pressed down on his tongue and when he began to suck, desperate and wanting, she felt a rush of relief, like yes, like finally. He was not gentle; she felt pressure bloom from the ring of his lips with each rhythmic tug, and in between rough suctions he sometimes bit down, as if accidentally, which surprised her more than it hurt. The rest of her fingers lounged on the lawn of his cheek, played with the thick of his earlobe. He didn’t take his eyes off of her. She forgot who she was.

She left after that. She just walked toward the train stop while he stood there, watching. She thought she’d forget about him.

Weeks pass and she’s stoned on her balcony, scrolling through Instagram. It’s hot out and she isn’t wearing shoes. White faces and clean makeup ads vanish into the top of her screen. She reads a few words of a long caption under a selfie and comments, so well said babe, then keeps scrolling.

A powder blue blur sweeps by and something primal inside her knows to stop it. She presses her thumb down and sees a tiny nose on an orange face, wet black hair smushed against a bassinet cushion. Her friend from book club had her baby. A boy.

Alex swipes out of Instagram and opens her messages app. She scrolls past the strained group chat with her friends from college and the ignored coffee date invitation from her coworker, until she finds the thread with an eleven digit number she never added to her contacts. He’d asked for her number before they went to his car, and she’d given it. A lonely text sprouts from the left side of her screen, timestamped almost a month ago. It says, had fun tonight. your cool.

She takes another hit off her vape and texts, wyd tonight?

The coastal breeze grazes her bare legs. Alex closes her eyes and leans back her head, open-faced toward the sun. She lets go of thinking. She focuses on the breath.

Lindsey Peters Berg lives in Los Angeles. She is currently at work on her first novel.