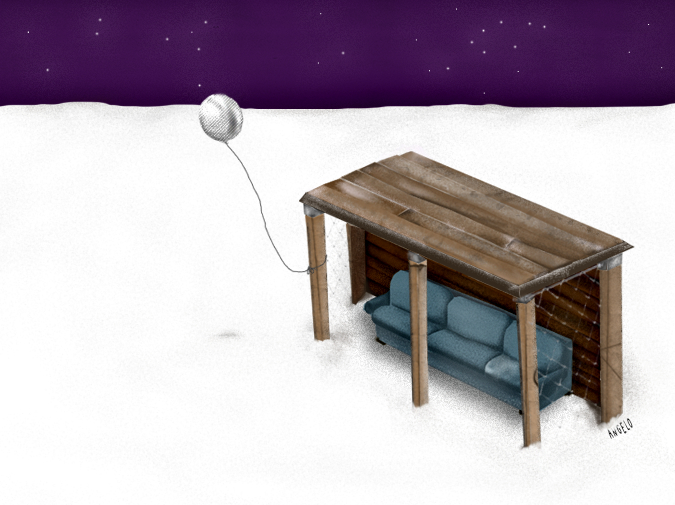 Across the basement, your best friend pitches graduation balloons like they’re weightless baseballs. You swing with a curtain rod that had fallen behind the couch (your mom will ask about that tomorrow), but the deflated cellophane takes its time, floating along, and you’re laughing too hard for good aim.

This is as close as either of you got to the varsity field, this unfinished floor with one crushed Bud Light and two throw pillows for bases.

Your dad gave you a 30 rack of Coors at the start of the night, saying now that you’ve got your diploma and all that, here’s a few beers for everyone. But after everyone had come and gone, you and Eric were shoving a lot more than 30 cans into several plastic trash bags. He always stayed behind for the cleanup, sleeping on the couch downstairs, driving you both for food in the morning, a hangover the only way to get you in the deli line that early: two teenagers in yesterday’s clothes and everyone else on their way to work.

You’d place your order and stand there, head slightly throbbing but bouncing back quickly, looking at the dirt-stained jeans and hard hats and black coffees and thinking these people know about life, these people know what they’re doing.

You don’t know what you’re doing. You never did, not when you hit the gas on your road test while the car was still in park, and not when you waited two months to kiss Anna because you didn’t want to mess anything up. When you first started dating she’d always say you had a nice smile. Instinctively you’d feel for the bar behind your bottom teeth, left over from years of braces, anticipating that dull stab where the wire’d come loose.

You were drawn to her like twisting on a swing set, braiding the metal chains over each other, then finally picking up your feet and spinning out into the woodchips. You got a concussion doing that once, eleven years old, at recess. She might’ve been in the same class.

Coming home for Thanksgiving this year is the first time you’ve seen either of them since August. When it gets dark you and Eric climb over the fence to that baseball field, unrecognizable under a blanket of snow. You could be anywhere if not for the dugout, a splintered-wood shelter from the last flakes coming down.

Eric’s breath huffs out in gray wisps. You stub a cigarette out in the snow, bury it under a fresh layer, and wonder if it’ll be there in the spring.

Anna waits in the diner. A little bell on frayed string knocks against the glass when you enter, sliding into a patched up vinyl booth that aches under every movement. Fluorescent lights glare down on the two of you, their faulty buzzing audible over the silence of decorative jukeboxes.

Before you can wonder why it looks so familiar, she asks if you’re going to get the chicken soup again. That’s what you got when we were like fourteen, she says.

Your index finger traces lines through spilled table salt. Granules stick to the skin and you strain your eyes to count them: nine crystals, each one a little world on your fingertip.

Maura Monaghan is a writer living in London. She can be found on Twitter @maura_monaghan.