After the Agony of Life 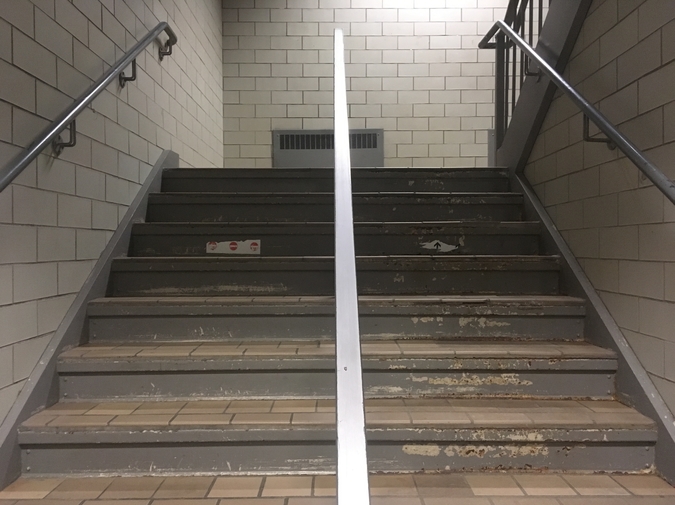 My first boyfriend thought that blood was ugly, terrible, putrid. He cringed at my paper-cuts and pimples. He was angry that I bled the first time we had sex. Or so he told me when I woke up.

In the musical Les Misérables, Eponine sings “A Little Fall of Rain” after she’s struck by a stray bullet. In the book Les Misérables, it is not raining while Eponine dies. She is simply bleeding so much that she believes it is raining. So saturated in blood that her brain belies reason.

When I woke up, my head throbbed hard once then felt dreamlike. Untethered. I smoothed my shaking hand over its strangest spot like one might soothe a spooked horse. My fingers felt a spiderweb fracture, my skull’s first fault line. Such discovery is not easy. A second voyage between my legs would not bring the same results. Instead, my hand slick with blood.

My first boyfriend’s name was Isaac. His father’s name was Abraham. Perhaps this portends an ancestral fate. A promise for future blood-letting—never from one another, but from the sacrificial animal substituted all those years ago.

When Marius holds Eponine’s dead body, he kisses her forehead. I do not think this would have been the case had my boyfriend swung his soccer trophy a bit harder and stopped my heart for good.

I bled for days afterward—woke in the night to feel my thighs wet, dripped on the shower floor, ruined four pairs of underwear.

I did not bleed a week later when I was supposed to.

The absence of blood was worse than its constant presence. I pressed a hand to my stomach and willed it empty. I wore pads in the hope that one minute, between classes, I might start my period magically.

Isaac might kill me if he found out I wasn’t bleeding. But he also might kill me if I broke things off. So there I went, to the place I nearly died, staring out his bedroom window at the Ohio River and wondering whether he would have dumped my body there. I’d be too blue for blood by the time they found me.

The chapter in which Eponine bleeds out is called The Agony of Death After the Agony of Life. Hers is not the sweet, short ballad one sees in the show. She drags her body to the man she loves and bites her dress through death-rattles. She sweats and shakes for hours. She is never happy.

In that liminal space of ten weeks, I wondered when death would get me. Even as my body shifted to support new life, I felt its call. I came back to the wrong side of the world.

My boyfriend felt the slight swell of my stomach. He realized I hadn’t been bleeding. I met the floor of his bedroom, o soft stale carpet, like one greets an abandoned friend. His foot connected with my stomach much the same way. Such reunions aren’t easy.

Isaac did not think bruises were ugly, terrible, putrid. He left me more bruise than body. It took thirteen hours—for which I was alone—for the bleeding to start.

If you lose over forty percent of the blood in your body, you will die.

I just learned that.

Then, I wanted to Google how much blood could be lost before I was nothing but bones, sheared and skinned as Abraham’s ram. I wanted to a lot, but my phone was in my bedroom, and I was in the bathtub, and moving hurt.

Every twitch of my stomach sent fresh blood streaming down my legs and onto the porcelain. I could not think of what else would leave my body with the blood. What small something might slip out of me.

The agony of death, after the agony of life. How certain I was of my impending expiration—how badly I wanted it. When I heard a small voice from down the drain say I deserved to die; that I was a bad mother in the Old Testament tradition.

I was a year younger than Eponine. Fifteen. I lost so much blood that, like her, my brain belied logic. I felt far too much of it pooled below my legs.

And so I truly believed, at the worst of it, when my body seized through one big death rattle: This bath is filling up so fast, and I don’t even remember turning on the water.

Megan Williams is a creative writing student at the University of Pittsburgh. Most recently, her work appears in 580Split, Inlandia, and Sonder Midwest.