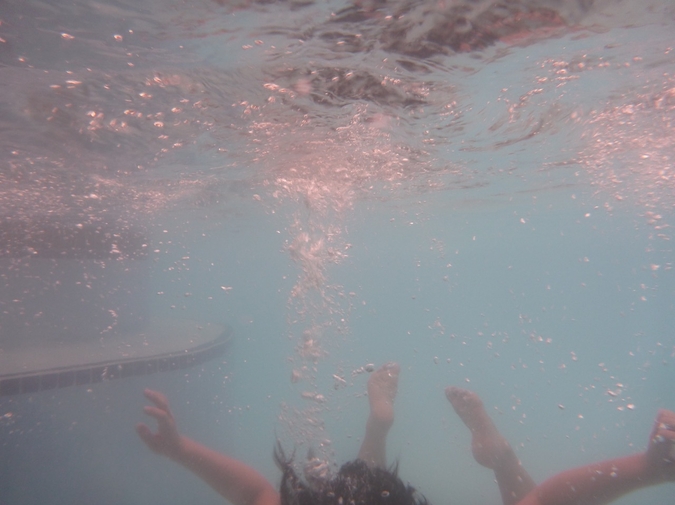 The other night, I dreamt about Luke. We were driving to Point Judith to swim, something we'd never done in real life, because we only dated for one winter, my sophomore year of college. In the dream, he rolled down his window so we could smell the sea air, and I shouted with joy because I've lived in the Midwest for over a decade and rarely make it back east. He told me he was happy to see me so happy. I said the same about him. The dream ended without either of us touching.

When I woke up, I felt unsettled. Not because of the dream, but because I couldn't remember Luke's last name. And Luke had been memorable: funny face, beautiful body, more of a jock than I was used to. Most of the guys I went for were soft, neurotic, and indirect. Luke never seemed worried about anything, and he always said what he was thinking. At the end, he took me sledding, just the two of us crammed into one of those cheap plastic discs.

We slipped far and fast, then fell into the snow, laughing. That's when he told me he had met a girl, and that he thought she might be the one. No prelude or apologies. I wasn't in love with Luke, and we'd had enough fun together, so I told him there were no hard feelings as I brushed the snow from my jeans. Then he drove me home.

I recalled all of this as my dream retreated from me, as I got my daughter dressed and made my coffee. And while I drove to work and sat through the first pointless meeting of the day, I tried to remember Luke's last name. It was a pleasant occupation, my private little crossword puzzle. I decided the name probably started with a "T," that rang a bell. So during my lunch break, I looked for him on Facebook, typing "Luke T…" into the search bar. And just like that, multiple Lukes appeared to choose from, including the one I wanted—I could tell from his glasses—and I clicked right away on his profile: less hair, broader shoulders. More handsome than he'd been when I knew him.

In his photo, he was standing next to a pretty blonde woman with very long teeth. I'd seen her once at Luke's apartment, long after he and I broke up.

Even after we stopped dating, Luke let me borrow his rusty Toyota Tercel to get groceries once a month. It was the only time we talked anymore—when I picked up or dropped off his car. I really had meant it when I told him there were no hard feelings. I wasn't pining away. But in driving to and from the market, listening to the station he had the radio tuned to (classic rock) and seeing the things he left in the console (dimes, chapstick, protein bar wrappers) I developed a pleasing attachment to him.

So when the blonde woman answered his door, I felt freshly wounded. She was tall and willowy, and she smelled beautiful—like expensive perfume. I stood awkwardly in front of her, my body suddenly too big for me and yet not sturdy enough. I told her my name, why I was there. She smiled in a friendly but distant way until Luke appeared, shaved and showered, threading his arm around her waist.

"Your keys." I held them close to my body, so Luke would have to put in some effort.

That was the last thing I ever heard from him. I bought an old bike with a large basket between the handlebars and got my groceries that way instead.

Staring at Luke's online picture, reacquainting myself with his name and countenance, I felt satisfied in one regard, but not in another. Because other things returned to me, too: what it was like being the person I had been back then.

I was going through a natural-deodorant phase, thankfully even more fleeting than my relationship with Luke. Also, I had decided I was going to live in Berlin one day, because I'd heard it was a good place to be an artist. And I wanted to be an artist, though I hadn't landed on what kind. I wrote melancholy fragments in my journal and spent too much of my work-study money at the art-supply store down the hill from my apartment. I also took acting classes and performed in student-written plays in which I inevitably had to cry about something.

That was why I always got cast, actually. Because I could cry on cue. All I had to do was slip into a sad old memory and let it fill my body, then my eyes. Everything felt so close to the surface in those days—fragile, malleable, electric.

As I walked away from Luke's apartment, I wept without shame, and my body seemed to return to its normal size. I looked at my narrow wrists, my unvarnished, bitten nails. Luke and his girlfriend were already receding from the particular pain of this moment. The sun was hot on my face, the ocean was just a short drive away. I felt alone, so alone, and yet the future felt newly open to me, and I took pleasure in that discovery.

Sara teaches creative writing at Oberlin College. Her debut story collection, Say Something Nice About Me, is forthcoming from Augury Books (Fall 2016). Find more of her work at saraschaff.com.