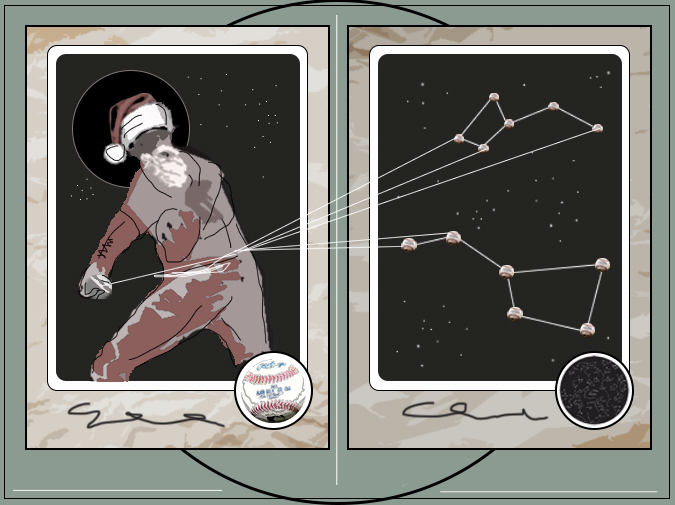 it has been said that when Kenny Lofton
climbed the centerfield wall to steal a home run
from B.J. Surhoff—you know the one,
the catch they made a gameday giveaway bobblehead
in commemoration of sometime
during the plastic boom of the late 2000s—
he accidentally snatched a few families of stars out of the sky.
so when I look up on summer nights
and see the dark eviction of a bulldozed astral village,
I think to myself, that must’ve been Kenny’s doing,
and quickly look for a spare centerfield wall nearby,
so I can climb into the sky
and maybe somehow replace what was stolen.

when I was 7, I asked Santa
for the T206 Honus Wagner baseball card,
the one worth a million dollars.
but when I opened my stocking that Christmas morning,
the only thing inside was a PSA-graded reprint of the card.
Mom then said, Santa probably couldn’t afford
the card and got you the next best thing,
and that’s when I knew Santa wasn’t real,
because the next best thing
would have been the T206 Ty Cobb,
and any almighty thing would have known that shit.

remember when Ken Griffey Jr. was just a shrimp
on the front of his 1989 Upper Deck rookie card,
and then 6 years later he scored the winning run
all the way from 1st in the bottom of the 11th inning
in Game 5 of the ALDS and sent the Yankees home,
but then a few years later he asked to be traded to Cincinnati,
where he grew up, and by that time he’d gotten muscular
and was basically God, but he had a lot of knee problems, too,
and then there was me, around the same time,
with a swing my dad said was as beautiful as Griffey’s,
but that was before my half-dozen knee surgeries
which was also before I got scared of big-kid pitching,
but maybe all hope is not lost for me yet,
and I will still end up like Griffey and return home,
someday, with a body holding bones I have finally grown into.