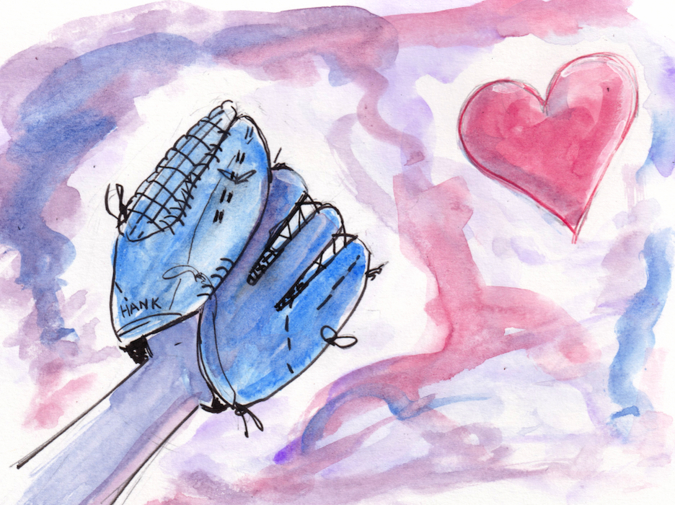 Baseball?
he says motioning a throw.
We head to the front yard,
toss it back & forth.
The ball smacks our gloves—
his throws can hurt now.

His brain works out loud,
Why can’t we lead off in my league?
Do you think the Pistons will be good next year?
Will everyone be mean in middle school?

I bounce some grounders, loft some lazy flies.
We reverse it so he can practice first base—
Keep your right foot on the bag,
I say over & again.
A jet howls above, lowering toward Detroit Metro.

Can I pitch now?
so he hurls at imaginary batters
who square up to the plastic
plate I crouch behind
in the corner of our yard
where some green scrub
taunts the sparse grass.

He uses my old mitt,
from when I was his age.
He never asked, just
started using it one day.
Our imaginary batters go fishing
after lots of low & outside numbers.
He strikes out two, walks the bases loaded.
This batter fouls off a lot of pitches
I say, to extend the at-bat.

My name on my old mitt
rests between my son’s
thumb and index finger,
written there in marker by my dad
when the world still glistened.
The stitched Rawlings logo
grows threadbare.

I toss the ball back and say,
He fouled that one off too. Full count.
Bases juiced. Remember the steps and
imagine the line between you & the plate.

You don’t need to try and throw hard
if you throw right, like Coach taught you.
I don’t tell him the age he is now
was the last level I pitched in,
that the next year, my straight
fastballs became BP pumpkins
for other teams. I was almost done
with this game by then. He breathes
deep, drops his shoulders. He looks
to me behind home. He scowls,
shakes his head no, then yes. He winds up,
rears back. He whips the ball, perfect,
pops my glove.
Strike three!
I bark like an ump,

and we walk inside,

the sun screaming off the windows
of our dented minivan
while 150 or so passengers
walk off that plane south
of here into the hot new unknown.

You can taste the baseball dust & teacher worry
down at the park tonight. The moms are talking
as—is his name Henry?—slides awkwardly into second.

The moms are talking as Henry? is tagged out—
he slid short, never actually got a foot to second.
The school made an announcement

and so the moms are talking—let’s be clear,
that’s a circle that includes some dads too.
People just call them “the moms” the way

we abbreviate things with sexist shorthand.
Anyway, it’s a kind of person, you know them
and their lawn services. Henry? shuffles off,

crying, his leg chewed up a little from
the infield. Coach pats his back, rubs his
head, gives him an attaboy as the moms

murmur disapproval at the teachers, at
the principals. It’s all faults and others,
it’s they should’ve and those damn

teachers… you hear one of them say
as you go to check on Henry?, to give him
another attaboy. You call him Hank just to see

what happens. He breaks into a smile.
He catches tears in the corner of his dusty grin.
You don’t know this, but his grandpa who

died last month was the only one who called him
Hank. You give him his attaboy & good try.
You walk back to your cradling camp chair,

the kind that curls you into a ball
over your pile of papers you grade while watching
your son and these various Hanks play ball.

Mitchell Nobis is a writer and K-12 teacher in Metro Detroit. His poetry has appeared in HAD, Rise Up Review, Nurture Literary, The Hopper, and others. He facilitates Teachers as Poets for the National Writing Project and hosts the Wednesday Night Sessions reading series. Find him at @MitchNobis or mitchnobis.com.

Nathan Goodroe is a writer and illustrator from Atlanta GA. He has had work in HAD, Hobart and a few other places online. He tweets at @TheGoodroe and his website with links to previous work is at NathanGoodroe.com.