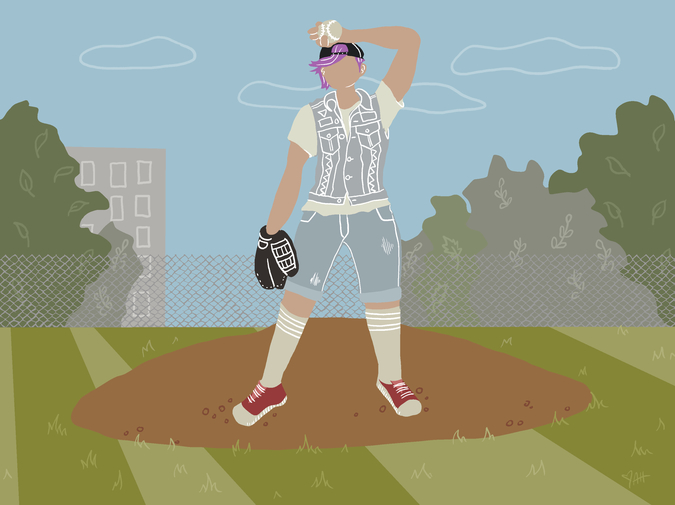 The east side of Buffalo’s shuttered windshield wiper plants wilted in rust, and hardscrabble butch lesbians screamed towards first base under a surprisingly sunny day.  It’s supposed to be a softball game.  But Bonnie had it in her head that softball was for bitches, and baseball was for butches.  And on that particular Saturday morning, Bonnie threw a baseball past eighty that broke twelve four over the plate, and there went Rhonda tossing her bat with a scowl as she takes first at a leisurely walk, Bonnie yelling the numerous ways she could fuck her with a strap-on called Wing Wagging.  Truth was, Bonnie threw a breaking ball strike three.  We all saw it.  But Bonnie had played softball for a D1 school, all stuck up and shit about it, bragging about all the sorority sisters she was going to fuck, and yet here she was ten years later, back in Buffalo, going off on poor Rhonda who couldn’t see anything right with those plastic mauve bottlepop glasses of hers, especially something a pinch above the knees going eighty and change. Honestly, Rhonda was kind of hot, glasses or no glasses, because she wore everything half a size smaller than necessary on a body that made bras necessary, hair so big it looked like a lion’s mane in a wind tunnel.  So fuck Bonnie.  Bonnie, the one still screaming at Rhonda, who planted a left foot on first, a hand on her hip, looking back at the mound like she just said No to Jodie Foster and was waiting for the next bitch in line.  Bonnie, Bonnie, Bonnie, let’s move on, we said.  We were all here for the butches.  Femmes don’t know shit about baseball, but we know who we want to fuck.  The ones who run down baseballs with delight, whipping balls from third to first, stealing second with a sprint and a slide, left arm outstretched and beating the throw in a billow of dirt, fuck your mama and your girlfriend and I mean it, you’re out!  We weren’t ever supposed to be here, softball diamond or no softball diamond, we’d been told our whole lives girls don’t play baseball.  But we’d also been told girls don’t fuck girls, and look where that got us.  Butches in heat over strike three and femmes drinking green bottles of Rolling Rock at the crack of dawn, eyeing the outfield like it was a beauty pageant.  Bonnie worked the plant in Tonawanda.  She drove a baby blue V6 pickup that many a femme took advantage of when it was time to move.  But she was a royal pain in the ass.  It wasn’t just baseball.  Bonnie started the Saturday morning games.  Seven in the gotdamn morning, that would be three hours after last call on a Friday.  Women would be on the dance floor of MC Compton’s, collapsed into each other after the hours long alternating stream of hip hop and sugar pop, and stumble out to their cars, roll down the window, pop in the Led Zeppelin, and peel out of the gravel parking lot with questionable lighting and try and sleep or fuck for a few hours before Bonnie berated them about swinging like Canseco’s grandmother.  The bar was the only bar this side of New York State that was for women only.  The city would live and die by its segregation, a parkway built to cut a swath of no man’s land between white and black, the white factory workers slowly hemorrhaging to the suburbs, black and brown bodies left to tend to the dying embers of a blue collar city.  But when there is one bar and all these lesbians, segregation comes to die at a dyke bar in Buffalo.  I bring this up, because Bonnie is as white as a basket of bread on the Mayflower.  And I’m not. I’m about as brown as an Asian can get in these parts, which means I’m called the N word more often than the chink word.  And for some reason, even though Rhonda is still on first, and all the other femmes on this bleacher stand are hooting and hollering at the dismayed and standing still outfield, Bonnie hurls the N word my way.  And like that, this baseball game goes as silent as a butch on her back.  Alison walks slowly in from right field, her glove swaying along her hip, its laces like leather bows.  At least that’s what it looks like from here.  Not that I can see anything, my vision is ketchup red.  I want to kill Bonnie, that’s a fact.  But I’m also watching Alison.  Alison is tall and blond and if Barbie had a buzz cut and blue eyeshadow caked on like primer, that would be Alison.  She has eyes the color of a hockey rink, this frosty blue.  Bonnie senses her approach, and turns.  That’s enough, Alison says, and Bonnie stomps her foot.  Alison looks at me, kind of like how she looked at me last night.  Maybe different.  I sit down and try to disappear.  Someone mutters White Bitch and someone else drops an empty into a bag and it breaks.  Bonnie walks back to the mound and winds up.  The batter is Debbie, and she swings easy and straight on a missed fastball, the crack of the bat and the whip of the ball, Alison runs after it, but she will never catch up.  We cheer and yell like our lives depend on it.  Bonnie smacks her mitt and watches the ball take off, past the pitted part of the brown patch between center and right, past the chain link fence that is more rust than not, past the street, pockmarked from winter, and multi-family row houses that watch us, glass and glare­­- that ball is gone.  And even Bonnie has to admit, she has the best view.

Kimberly Bliss is a Philippine-born, Buffalo-bred and Brooklyn-boroughed novelist for hire. Her work has appeared in Dime Show Review and she was a 2020 resident at the New Orleans Writers' Residency. She is a Writing Workshop Leader at New York Writers Coalition, and yes, is now holding court on Zoom. Find her online at https://www.kimberlybliss.com/ and Twitter @blisster.

Aubrey Hirsch is a writer and illustrator. Her comics have appeared at The Nib, Vox, Black Warrior Review, The Florida Review and elsewhere. You can learn more about her at aubreyhirsch.com or find her on Twitter: @aubreyhirsch.