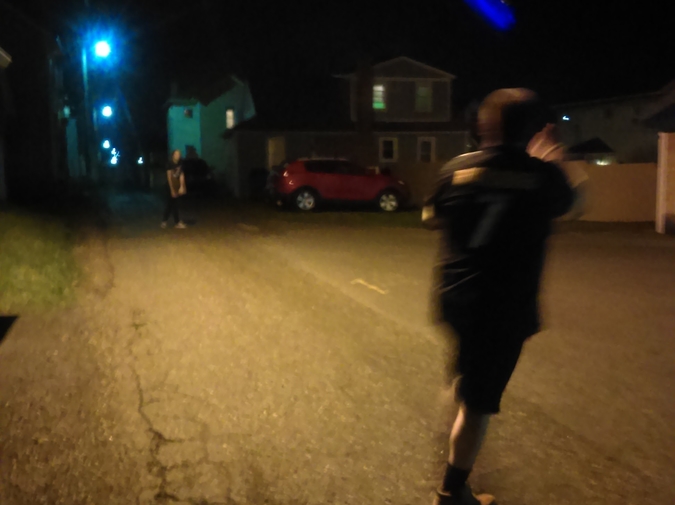 The Triple Crown is alcohol, weed, and Adderall. Hank did the Triple Crown on prom night at Emma’s parents’ house. Emma’s parents’ house was in a wide field with around fifteen other very new and very large houses. The house was at the end of a dirt road connected to a gravel road connected to the highway which went into Pennsylvania. Hank had taken the Adderall before he came to the house. He’d called Andrew on Snapchat and asked where the fuck did Emma live.

“What,” Andrew said. He was standing between washing and drying machines and a shelf of storage containers.

“What... where are you walking from?”

“I’ll come get you,” Andrew said. Hank ended the call.

Andrew went out the basement door and started climbing the hill. The grass was wet and stuck to his Adidas. Looking over the houses as he climbed, Andrew imagined he could see and feel the field’s former emptiness projected over the houses. The houses seemed uneven, as if they’d been dropped from above to random places on the ground.

There were a few trees in a grove between the houses and the main road. Surrounding the northern edge of the field was a line of taller, stiller trees. In the dark and distance it was like a single long hedge.

Andrew looked at the gravel road with his phone flashlight on. He thought how weird it was that Hank had called him on Snapchat instead of the normal way. “Hank is a different kind of human than me,” he thought. “Our offspring are going to evolve to different species.”

The night was solid black and the gravel was bright and gray in the flashlight beam. Andrew saw the glowing sign of the Subway and its darkened brick wall with silent headlights moving beyond it. Then he saw Hank walking toward him. Hank was mouth-breathing, wearing a black hoodie with the hood up and the string pulled tight.

They walked back through the grass to Emma’s house. Hank said, “This grass is muddy as shit.” He spoke, as always, in a low grumble, but his enunciation was unusually clear. He gazed straight ahead with a neutral, content-seeming expression.

They went in the door to the basement. A few people said “Hank!”

To the right of the door, Emma was sitting on Luke’s lap in a brown fake-leather chair. Beyond them, Brandon, Luke’s friend, was sitting in a white chair, very drunk. In front of the chairs was a rectangular coffee table with two bottles of Bud Light Lime and one large, black bottle of indeterminate alcohol with a brand name in Old English font. This bottle, Andrew knew, belonged to Luke.

In front of the door was a black outdoor lounge chair with a yoga ball and woven blanket sitting in it. Beyond it, Harper and Jasper were cuddling on a quilt on the floor.

On the far side of the basement, beside a small exercise trampoline, there was a big blue container with ice and different kinds of alcohol inside of it. Hank went to the container. He held up a bottle of champagne. “Are we doing this?” He said loudly.

“We can open it now,” Emma said. She stood up and went over to Hank. Hank opened the bottle. He took a drink and passed it to Emma.

The champagne was passed around the room. When it reached Luke, Luke said, “No thanks. I’ve got some broccoli I’m gonna smoke later.”

“You’ve got broccoli?” Hank said. He took the champagne and drank it.

Luke got up and went to the door. Hank followed. Brandon was asleep in the white chair. Andrew, Emma, Harper, and Jasper followed Hank.

They all stood in a circle on a square of concrete outside the basement door. Wind was blowing. Luke reached in his jacket pocket and pulled out a bubbler and a grinder. Inside the grinder was ground up weed. Luke put some of the weed in the bubbler, smoked from it, and passed it to Hank. Everyone smoked from the bubbler at least twice.

When they went back inside Andrew sat with his head touching the side of the brown chair and his feet touching one leg of the coffee table. He watched Jasper drink from the champagne. Harper was walking around the basement to hug everyone. She came to Andrew and hugged him. Then she went back to the quilt and sat with her arm around Jasper’s shoulder.

“Jasper is a male model,” Andrew thought. He focused his feeling on the spots on his shoulders where Harper had hugged. He imagined his shoulders were glowing. He gazed at Harper and Jasper dreamily and thought, “Harper is an angel.” Then he turned to Emma and said, “How are you doing?”

He saw Emma was pale and her eyes were unfocused. She swayed a little, then dropped to her right and vomited into a small trash can.

Luke appeared from behind him and kneeled beside Emma, grabbing both her shoulders to keep her head aimed toward the can. When Emma was done vomiting she fell asleep, curled around the can.

A little later Jasper and Andrew were both dancing to “Pop Style” by Drake, which was playing from Andrew’s phone speaker. Andrew stopped dancing and crawled close to Hank.

Hank was sitting in the lounge chair holding the yoga ball against his belly. His hood was pulled tight around his face. His eyes seemed closed and there was a glare on his glasses.

“Are you okay?” Andrew said.

“I have fucking brain damage,” he said.

Luis Neer was born in Weirton, West Virginia in 1998.