Excerpt from: The Phillie Phanatic 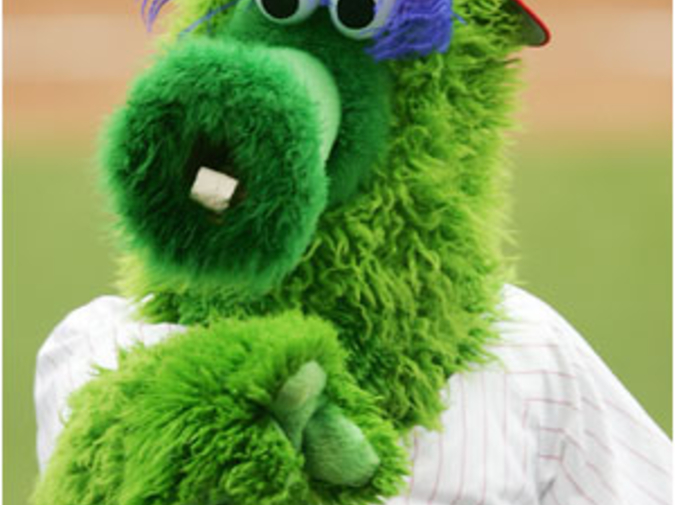 I have been set on fire and pushed down these steep cinderblock steps. The people here have snapped the bones of my arms and kicked my stomach. My heavy fur doesn't help – it just makes the sweat and stink and daily humiliation even more insufferable. On a muggy East Coast night I can feel the weight of this entire city pressing, pressing me down into the toxic and overly manicured field from which the heat rises in a blinding, swiggling haze. My life has become a carnivalesque nightmare from which I cannot awaken.

For twenty-eight years I have been imprisoned: an eternity of solitary, lugubrious winters and sweltering Philadelphia summers. I ask myself sometimes which is worse and I have found in myself no suitable answer.

Of my kind, I am among the last and, almost certainly, the only remaining in captivity. We lived on an archipelago, an evolutionary dead end in the South Pacific, where the years passed in Edenic contemplation of the order behind nature's most colorful abstractions. My scat redistributed fruit seeds around the islands and nourished the very soil. It was a carefully balanced yet sturdy ecosystem and I often worry of the extent to which my absence from it has been felt.

We of course had no need of nature's camouflages, of any ability to blend into the background – we were the background, upon which the splendor of the natural world unfurled each morning. There exists a certain and hideous irony in the fact that my bright green feathers and blue eyebrows attracted my predators rather than repelled them.

My captors came bearing notebooks, tape recorders, and rifles. I remember the loud report of their voices but did not yet know the words nor now can find meaning in them. I was shot, drugged. Manacled for my passage to this stifling world, to this concrete O. I awoke castrated.

I knew no precedent for the despair or for the temperatures I faced during that first winter. My feathers molted and in the span of a month were reborn as fur. Scars still ring my ankles where it obstinately refuses to grow. My beak, perfectly adapted for the luring of nectar from a variety of large flora and smaller cephalopods from amid my native coral, proved incompatible with your food and I nearly starved. My handlers, as I began to think of those two men, began frappéing my meals – bananas mostly, and exotic berries of amazing delectability – and placing plastic tubs of the liquid in a corner of the 10' x 12' x 10' kennel that became my home. Once a week they would noisily return to refill them and hose my wastes into a drain built into the floor.

At night, there were rats.

My cage stood in the corner of a vast storage space beneath the right-field foul territory of Veteran's Stadium, a room shared by the grounds crew, the marketing department, and even some members of team, whose faces changed from year to year but who sometimes left behind boxes of clothing and, in one case, an old motorcycle. It was also the room in which the Eagles cheerleaders – creatures far more worthy than I of your pity – undressed in winter, at which times a tarp typically used to protect the infield from rain was placed over my cage. A bolted door led to the home clubhouse. The window was blackened out but someone had chipped away at the paint with the desperation of a man scratching off a lottery ticket with his last quarter. A dozen shades of nail polish covered a hundred peepholes in the layer of otherwise opaque latex separating me from the players.

In the years that followed, I heard everything that transpired in the clubhouse, from Rose's increasingly agitated calls to his bookie to Sarge splintering a Louisville Slugger on a locked cooler of beer to Eisenreich ruthlessly hollering obscenities at himself.

For their amusement, my handlers forced me to go without food for a month and then placed half a dozen cheesesteaks into the electrical blender. The very odor of slaughtered and rancid meat brought to mind the ancient stories of my kind who, long ago, with the blessings of our shaman, resorted to cannibalism in an unsuccessful and short-lived attempt to stave off our rapidly more apparent extinction. The liquid concoction of flesh and bread, onion and Cheez Whiz became my only hope of survival, my final salvation. I will tell you, reader, I ate it – and it was delicious.

My appetite pleased the men and more dietary transgressions followed: Soft pretzels, Italian hoagies, peanut shells, hotdogs, sometimes all at once and blended with beer. To this day I resent with all of my heart the rancor with which they experimented upon me, but I am forced to concede that my love of your foods has comforted me through many dark nights spent shivering in this cage.

The abuses I suffered at their hands however had only begun, and as of this writing has shown only the most perfunctory signs of abating.

Read the rest of this story in in Fiction International 40 (2007), where it originally appeared in its entirety.